"The Young Messiah" is my new favorite Jesus movie. Based on Anne Rice's historical novel (but with adjusted theology), "Christ the Lord: Out of Egypt," it combines the latest and best in filmmaking, the dramatic arts, mature biblical scholarship, theology and imagination. It is biblically and theologically sound (always a tricky task when speaking about Jesus, but even more so the Child Jesus and his "human knowledge"--what did he/didn't he allow himself to know in his humanity at that young age? See Luke 2:52) There has been some talk that "apocryphal writings" inspired some scenes. "Apocryphal" does not mean "Gnostic." The apocryphal Proto-Evangelium of James was used by early Christians as devotional reading. But it's not the Word of God.

FILMMAKERS DID THEIR HOMEWORK

"The Young Messiah" shows lots of homework was done. No trendy twenty-first-century ideas plopped in. No outlandish "what if" musings (beyond Jesus bringing a bird back to life). The dialogue is so carefully crafted that every word effortlessly rings true in these fully fleshed-out and delightful characters. The text of the Scriptures is faithfully adhered to (without really taking liberties) and then sundry plausible plot points--that totally work--are skillfully woven in to bring life to the text. Every scene is to support the text, not draw away from it. All exposition is invisible and clever. The British-accented cast slays it.

This story of one year in the life of the Child Jesus begins with Jesus in Egypt being bullied by another boy from the Jewish community, and escalates into some gripping action which it maintains to one degree or another throughout the film. Never boring. Never trite. There are no hackneyed turns of phrases. The theology is precise. This film has everything in it but the sensational.

THE BEST HOLY FAMILY EVER

Wunderkind, Adam Greaves-Neal (it's his first film role and he was chosen from among 2000 child actors all over the world), plays Jesus with childlike openness, earnestness and chutzpah, and avoids gooey sentimentality (as does the whole film). His facial expressions and reactions are just completely natural. You will fall in love with this little Jesus and just want to hug him. Mary and Joseph are the consistently best Mary and Joseph the screen has seen (Sara Lazzaro [Italian & American] and Vincent Walsh [Irish: raised in Dublin & Toronto]).

There aren't just a few good scenes or lines for these two. The whole film exposes what it might be like to be the world's most unique couple, with their utter devotion to Jesus and to each other. Mary and Joseph don't have all the answers, but they know this precious and precocious kid is God's Son, and their own profound faith and love encompass him. Mary and Joseph wrangle a bit with each other over what is best for Jesus, and both, especially Mary, are hyper-vigilant and appropriately worried for most of the film. Mary and Joseph also know that only they--out of the whole world-can truly understand each other. A wonderful, mutual, egalitarian marriage is portrayed.

The entire cast shows us how people of faith (specifically first century Jews) wrangle with God and the mysteries of God. Stunning. The Satan character (Rory Keenan, also Irish) lends yet another layer.

A YEAR OF LIVING DANGEROUSLY

Jesus must slowly grasp who he is and learn to keep his powers under wraps for now. He's moved by human misery, pain, suffering and sickness, and realizes that when he prays over people or asks God for something: healing occurs, miracles happen. And others are watching, too. Herod Jr.--as despicable as his father--begins to get wind of a little healer boy and realizes that he is just the right age to be the Messiah, "Wonder-Counselor, Prince of Peace." Maybe this child escaped the Bethlehem bloodbath. He sends his centurion (Sean Bean)--who was also present at Bethlehem and carried out the slaughter--to find and kill the boy Jesus. This constant believable danger, with its attending intrigue and narrow escapes make for an urgency to the whole film.

THE HUMANITY AND DIVINITY OF JESUS

Mary and Joseph keep Jesus' origins and early life a secret from him, but this is not proving to be helpful. Without doing a spoiler here, Mary eventually tells Jesus about the Annunciation in a wonderfully tender scene, as Jesus tries to comprehend: "So is the angel my father?"

This story, this film believes. (Not everyone who worked on/in the film necessarily believes, of course, but the film itself does.) This is the beauty of virsimilitude and acting: putting oneself "in the place of" with every fiber of one's being. Anne Rice is Catholic, and the Catholicity of this film is palpable.

Big money must have been thrown at this production--just from the looks of the sets and extras. The music starts off as standard Bible movie music, but then gets a bit more diverse and disappears into the film, adding to the overall excellence of the experience.

COOL TO BE GENTLE

This film manages to make the gentleness of Jesus tough, hip and cool--even in the face of the savage might of Rome. (Great for boys/men to see!) My favorite quick image to illustrate this is the final "home" of the little wooden camel (I assure you that will make sense when you see the movie).

Only the best writers, filmmakers and thespians could pull off such an engrossing marvel as "The Young Messiah." I am in awe. It would be grand if this same set of creative geniuses would do the adult Jesus, but YM is gift enough. 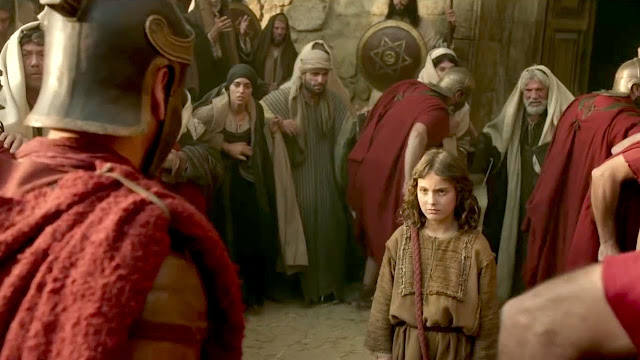 Ever since the wild runaway success of "The Passion of the Christ," Hollywood has been trying to make a Jesus movie that will move and WOW crowds once again. They just did.

Appropriate for children? Yes! (What better role model for the kiddos? If they can handle seeing some men hanging on crosses and the repeated [non-graphic] murder of the Holy Innocents.)


--DO NOT WATCH THE TRAILER. GIVES A BIT TOO MUCH AWAY!

--After writing this review, quite a bit of controversy came up over the film being "heretical" and portraying an erroneous Christology (even after Archbishop Chaput and Cardinal Sean O'Malley gave it the thumbs up). The argument mostly being stated this way: "Jesus always knew He was divine." Yes. In His divinity. But in His humanity? It gets way trickier. The most important thing I think we need to keep in mind (and I'm no theologian, but I am a consulter of theologians) is that Jesus was truly God (Christians usually don't have a problem with this) AND truly man (Christians often have a problem with this), who grew in "age, wisdom and grace" as a child. It's a bit mysterious as to when and how Jesus THE CHILD (not Jesus the full grown man) came to full knowledge of His identity.

Jesus' divinity did not just override and overwhelm His humanity. (This is another kind of heresy!) Then He would not be truly human.

Catholic World Report has one of the best explanations of the Church's teaching on the hypostatic union (the union of Jesus' divine nature and human nature) and "human knowledge" of Christ: http://www.catholicworldreport.com/Item/4652/The_Magisterium_and_the_Human_Knowledge_of_Christ.aspx …

Even as an adult, didn't Jesus have to operate in the world as man? Jesus said: "Who touched me?" when a woman in the crowd touched his robe from behind and Jesus felt healing power go out of Him. Did He really not know (in his humanity) because His back was turned? Or did He just want the woman to come forth? When Jesus said He didn't know the time of His own Second Coming (Mt. 24:36), was He referring to not knowing in his humanity? (CCC 474 says that certain things He was also not sent to reveal.....)

A priest friend of mine who teaches Christology in a seminary said that we don't really know when the Child Jesus in His humanity came into a full realization of His identity, but it seems it must have been before the 12-year-old Jesus' Finding in the Temple. "The Young Messiah" is the 7-year-old Jesus.

--In the late 80's, the made-for-TV "A Child Called Jesus" was a similar attempt. I don't remember watching it, but I can't imagine anything comparing to "The Young Messiah."

--OF COURSE Jesus would have brought His little birdies back to life.

--The name of the actor who plays Jesus is "Adam." (Get it? The new Adam? You can't make this stuff up.)

--Jesus asks A LOT of questions.

--One of the best scenes: Jesus talking to some rabbis and blowing their minds (even before he goes to the Temple).

--They got it correct that the Magi were from Persia! Perhaps because the director/writer is Iranian? ;) Well done! (Twitter: @Cyrus Nowrasteh)

--I would like to tell you so much more about this film, but I would be recounting the whole thing!

--There is one touch I would liked to have seen/heard at the very end: a connection of Jesus being on earth for the people, for us. But that's just me.

--Jesus pipes up at the most inopportune moment: "I was born in Bethlehem!" No "Messianic Secret" here! (Bible scholar's joke)

--"Joseph & Mary in #YoungMessiahMovie are the ultimate power couple." --@AWalkenstein

--I love how the film shows the fact that people knew about the visit of the Magi to Herod. The New Testament says that people TALKED about things like Elizabeth giving birth in her old age, etc. Jesus was surrounded by signs and chatter. He didn't just appear out of nowhere and no context in a vacuum....

--Jesus is THE good guy here. The good guy with THE destiny.

--WHY is this the best Jesus movie ever? The spirit of God and the spirit of the Child combine. Palpably.  #AlwaysDivineAlwaysHuman

--And to think: I didn't even want to see this film. (I thought it was going to be a Flower Power Indigo Child frolicking in a puff of autumn mist working magic.)