MOVIES: “THE SECRET OF KELLS” 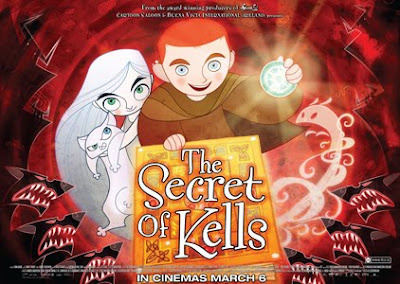 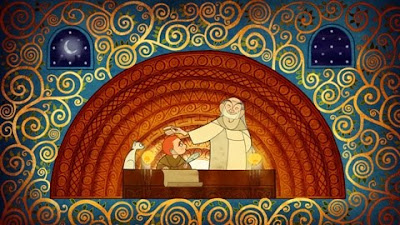 The Oscar-nominated animated gem (or shall I say "emerald"?) "The Secret of Kells" is a definite "must-see." No excuses. Make an effort. The DVD isn't out yet, but the film will be returning to the Siskel Film Theater (State Street, Loop, Chicago) June 25--July 7, as it tours other cities. You DO want to see this on a big screen, and although I'm NO fan of 3-D, the hyper-creative, ever-in-motion, mixed-art-style graphics would have been marvelous in 3-D. There's even a scene where our little hero, Brendan, battles illuminations-come-to-life (you know those Celtic-knot snakes?) in a "Harold and the Purple Crayon" kind of way.

The "Book of Kells," of course, is an ancient (9th century) embellished Irish manuscript of the Four Gospels on view at Trinity College in Dublin. Its adventurous history (Viking raids, theft, lost cover, etc.) has now been given a completely new life with this partially-fictitious account, bringing the printed/illustrated Word of God to the cinema, and from there, of course, to all the new media! Erin go bragh! (The film is actually a collaboration among Irish, French and Belgian entities.)

Brendan is a red-haired lad who lives at a monastery with his uncle, the sad, stern, red-haired Abbot, and an international community of monks: Italian, African, Chinese, German (?!). They live under the ever-looming, certain threat of the Norse invasion and ensuing destruction. The Abbot's all-consuming preoccupation is to build a huge wall around the monastery for protection, although by all counts fleeing is the only way to face these marauders. Master-illuminator of manuscripts, Brother Aidan (a Willie Nelson lookalike), arrives from the island of Iona, where everyone has already been killed. (The Vikings resemble huge, dark mailboxes with glowing red eyes. They're scary, but not too. The most gore/bloodshed we see is a stick arrow piercing the Abbot's ample robes. Even wee ones would probably be able to handle this.)
Aidan enlists Brendan's help in completing a manuscript—much to the Abbot's displeasure—which requires Brendan to foray into the outside world, specifically a beautiful but treacherous forest inhabited by a friendly girl-fairy, Aisling (who wears white bell-bottoms). The only flaw in the narrative is an abrupt break after Brendan encounters the nebulous evil "Crom Cruach" in the forest and returns unscathed. It seems to me that perhaps there should have been a price to pay.

"The Secret of Kells" is a multi-level, multi-purpose experience. Written for children, it is full of fun (humorous animals and other antics) and fantasy (it mixes in Irish fairytales and legends). It's a tale of faith and art, beauty and "light." (The borders and drawings of "The Book" are called "illuminations.") Light is a big theme in "The Secret." Although "prayer," "miracles" and other Godtalk are manifest, there is no mention of "God," "Jesus," or any of the actual text of the Gospels (the focus is on the artwork), but the fact that The Book dispels darkness is very prominent. "The Secret" is an excellent springboard to diving into Celtic Christianity, culture, art, history, legends, monasticism, and, of course, what gives the Book of Kells its true power: God's Word!

There are maxims and deep conversations about overcoming fear and doing the right thing that adults, too, will ponder. Brendan states that he's "not afraid of imaginary things" (which can be taken two ways in the film). Are you?

--Other morsels about The Book: When it was stolen, the bejeweled cover was ripped off (and never recovered). The Book was found in a ditch and sustained some water-damage. Other than that, the 680 individual pages are extremely well-preserved. Only two of the pages lack any ornamentation, while entire pages are primarily decoration. Some of the workmanship is so finely detailed that it can only be seen clearly with magnification.

--There's an underlying love of books here. Brendan: "Not everything is written in books." Brother Aidan: "Yes, I think I read that somewhere."

--Nature (the woods) as a "book of revelation" is also a wonderful motif. (This is where Theology of the Body would come in. Also, the theme of light and seeing: "Your eye is the lamp of your body. When your eyes are good, your whole body also is full of light. But when they are bad, your body also is full of darkness." Luke 11:34)

--If you go to Dublin to see The Book of Kells, beware! Sinners will go blind when they look at its pages! (Just go to Confession first.)

--Some of the animation reminds me of "Bullwinkle and Rocky" and "Watership Down."

--In addition to the mystical/magical soundtrack, check out the 90's Christian album "Book of Kells" by Iona (a group who puts the Gospels to song).

--"The Secret of Kells" (and other award-winning children's films) is distributed by http://www.gkids.tv/

--If there isn't already one, a wonderful (Christian) study guide should be written for SOK! (E.g., What were the Norsemen looking for? What did they miss? What is true treasure? Why do you think the Abbot gave up illuminating and was against it?) 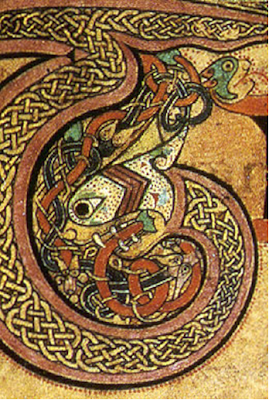 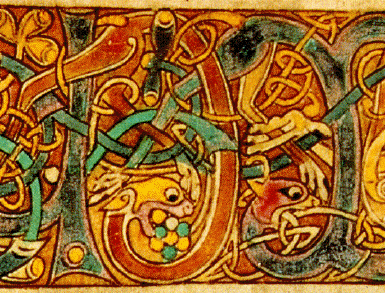 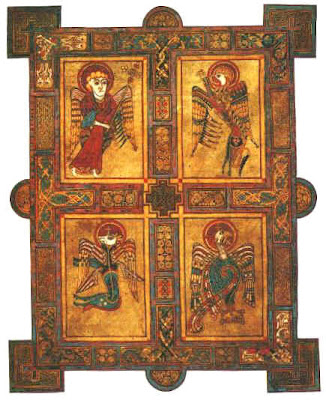 Email ThisBlogThis!Share to TwitterShare to FacebookShare to Pinterest
Labels: book of kells, secret of kells