"TRANSFORMERS 3" FILMING IN OUR BACK ALLEY 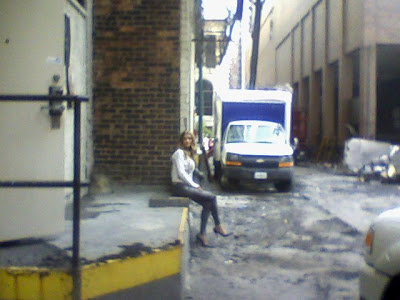 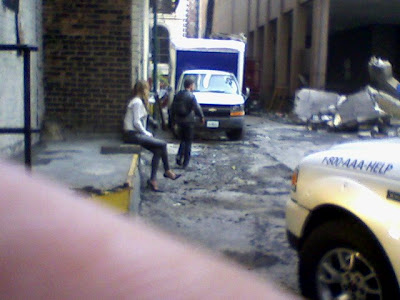 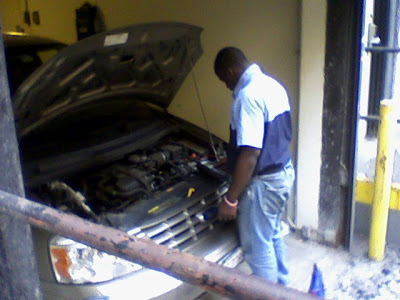 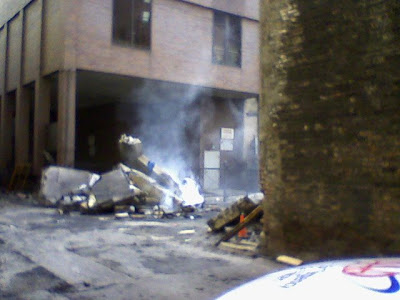 "Transformers 3" has been filming around Chicago since mid-July and in our back alley for the past few days. Our entire alley has been shut off to the public, with all kinds of police and security. But our bookcenter/convent is smack-dab in the middle of the "Action!" and it has its perks.
This morning, I let a 15-strong, red T-shirted, junior high youth group race up the fire escape to snap furtive pictures and video. Said police and security were not amused.
Later in the day, we absolutely HAD to get our van to the shop for a new battery, but it first had to be jumped by AAA. Sooo...we cleared it with security and some P.A.'s and AAA nosed into the alley, just out of the shooting line of the cameras. Suddenly, leading lady Rosie Huntington-Whiteley (Megan Fox's replacement) and Shia LaBeouf came running--through a scene--off camera to our loading dock. (I was, like, 20 feet away from them with the AAA guy. ) "Shia LaBeouf at 1 o'clock," I hissed to the AAA guy. "Yeah, I see," he whisper-grinned. "Aren't you glad we called you?" I beamed.
To my horror, Sr. Lusia Yvonne OPENED OUR BACK DOOR, like, 10 feet away from Rosie (now sitting on our loading dock) and Shia. "Hi! I'm Sr. Yvonne!" to Shia and Rosie. Both of them shook her hand. Then she proceeded to talk to them in the most natural and wonderful way, treating them like "ordinary people doing a job, except they make a lot more money" (Sr. Yvonne's words to me later). She invited them to stop in the bookcenter or ring the bell if they needed anything, told them about our media mission, told Shia we have a place in New Orleans (Sr. Yvonne keeps up with the celebrity stuff online, so she knew Shia is from Louisiana), MADE SHIA LAUGH when she told him: "I read all about you--but I know it isn't true." She told Rosie she looked tired, and Rosie said: "I am! It's a long day!" Shia asked how many Sisters lived in the building and if we got to get out and go to baseball games and the like. Sr. Yvonne said: "Yeah, if we get free tickets." SHIA LAUGHED AGAIN.
Meanwhile, I--who, have been trained as a proper Angeleno after having lived in L.A. for 5 years--was totally intent on NOT MAKING EYE-CONTACT AND GIVING THE STARS THEIR SPACE WITHOUT OGLING OR APPROACHING, but found myself shaking Shia's and Rosie's hands because Sr. Yvonne introduced me to her new best friends.
Then came the hoof-in-mouth disease. Earlier that morning I had asked one of the red shirts who the new actress was. He said: "Some Victoria's Secret model." So there I was in the back alley with two of the stars from the biggest movie of 2011 that has been filming in our fair city for over a month and I didn't know the female star's name. No, wait! I remembered! As I shook her hand I said: "Are you Victoria?" Yes. I really said that. Luckily, I don't think she made the connection, but very sweetly said, "No, I'm Rosie." I had absolutely NO IDEA what to say to Shia when I shook his hand, so I said--referring to his smudgy-flesh-wound-make-up--"Wow. They really messed you up." Yes. I really said that. What could he do but agree? "Yes, they did," he said, and he and Rosie raced off into the smoke machines and broken asphalt, out of sight.
A lot of the crew are from L.A.--the best movie crews in the world. They are so gracious (as I always knew them to be in L.A.). So, I took my courage in hand and told a P.A. they should put our good friends, the Flood Brothers', dumpster in the film, instead of Waste Management's. I told them it was "more Chicago." Next thing I knew OUR Flood Brothers' dumpster had disappeared. Could it be...? No! It was just shoved to the end of our alley.
Sr. Margaret Michael, our national vocation directress, arrived for our vocation retreat, driven by a priest who dropped her off near the back alley (Fr. Brian, the Archdiocese of Chicago's new vocation priest). She wanted me to meet him, so he said he'd drive around to the front of the bookcenter. It took him forever. Turned out, some of the crew saw the Roman collar and asked him to conduct an impromptu prayer service!!!
How did I get the above (cell phone) pics? I pretended I was making a phone call. You press "camera" and then put it up to your eye, er, ear.

And I think I saw Michael Bay.

Email ThisBlogThis!Share to TwitterShare to FacebookShare to Pinterest
Labels: transformers 3