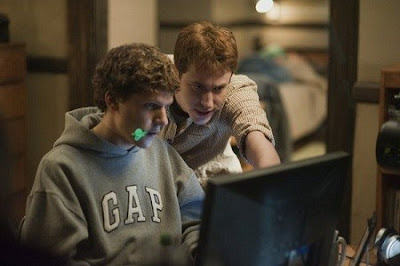 Is “The Social Network” all that? Yes it is. At first, I didn’t even want to see it because while it was still in the making, media pundits were poking fun at it, like: “Who cares?” “Who cares about Zuckerberg?” “Is the beginning of Facebook really a story?” But then the buzz and the box office. Evidently there is a story here.
What’s the hook? I think there are four: 1) Facebook has changed the face of the internet and the world. It’s just a phenom too big to ignore. http://www.youtube.com/watch?v=QLd9q88ohUs&feature=related (I always like to say that Facebook is what the internet was missing from the beginning—a kind of soul, personalization, the human touch.) 2) Like “The Revenge of the Nerds,” “The Social Network” chronicles the shift of power to the (now-called) “geeks.” Geeks who are not only off-the-charts brilliant, but understand the potential of technology and how people perceive and use it or CAN perceive and use it. 3) Like Bill Gates (an actor portrays him briefly in “The Social Network”), Zuckerberg seems to be a shrewd and ruthless young businessman who--for all his own social awkwardness--really does understand human nature. This understanding just doesn’t seem to work for him personally. 4) Understanding how people use today’s and tomorrow’s technology IS “the next big thing.” Those who cling to outmoded ways of thinking about technology will be thrown on the radiation-exuding landfills of history. The future is always about NEW IDEAS, not stasis, and the young Turks will supersede not only the old Turks, but one another in winner-take-all battles.
I kind of feel bad for the real Mark Zuckerberg. He has been thoroughly skewered in this movie. How much is true? Clearly the legal proceedings against Zuckerberg did not come out in his favor. Or maybe they did (since they were out-of-court settlements that a character tells Zuckerberg is like “paying for a parking ticket”). Zuckerberg is made to look like an ambitious, self-obsessed, controlling, scheming, misanthropic, arrogant, jealous person. And what’s worse, a double-crossing friend. But not greedy, not really. For him, money is only power, it’s only the symbol of a superior being. In the movie, Zuckerberg also finds himself to be superior due to his computer prowess, and says as much.
“The Social Network” is like a young man’s “Wall Street,” in that enterprise and entrepreneurship and VC and investors and stock holdings and forming new alliances and companies are all a great big game in the end. And it’s like “Wall Street” in the “talkie-ness” of the movie. But this is a good thing! The visuals and acting are just superb (our young actors today are pretty amazing). The music—Trent Reznor!—fittingly starts off as heavy electronica, and then mellows out and disappears into the fabric of the rest of the film.
SPOILER ALERT! But at the end, when he’s sitting on top of the world quite literally, Zuckerberg is left without the one thing he wanted most, or at least wanted as much as sitting on top of the world: Erica. What a perfect closing shot: Zuckerberg using Facebook to slowly send a friend request to her. There is little hope it will be confirmed, but he keeps hitting “refresh” over and over, waiting…. Love is the one thing that the masters and commanders of the world can’t master and command, can’t outsmart everyone else to obtain. One has to put self to the side, die to self to even really see the other person, the beloved, as “other,” not just an extension of self. One wonders if the silver-screen Zuckerberg could ever let go of self enough to develop this capacity.
In the first scene where he’s talking at his girlfriend with rapid-fire Spock-like logic, passive-aggressively accusing, attacking, needing and demeaning her all in the same breath, we wonder if Zuckerberg is a kind of savant who is just maladroit at normal social interaction. But he tips his hand too many times in the conversation, demanding that she “be supportive” and grateful because he is such a great boon to her life.
THEOLOGY OF THE BODY? The seeds are definitely there. The inciting incident (for Zuckerberg to create Facebook) is Erica breaking up with him. His second impetus to expand Facebook is his second rejection by Erica. Sean Parker (Napster) recounts later in the film how he got started himself after being jilted by a girl. As we hear the men in “The Social Network” talk, it seems everything they do is FOR “girls,” albeit mostly to use them sexually, or rather engage in mutual sexual use of each other. But it’s still about the girls.
Erica knows her own worth AND knows that if she hitches her wagon to star Z, she WILL be going places and become incredibly wealthy. But she’d rather have love.
OTHER STUFF:
--Zuckerberg created Facebook while drunk. Imagine what he could have done sober!

--Some great, weighty-in-2010-hindsight* quotes: “We’ll just email it to a few people.” “That’s my roommate!” [one girl states this with horror—making it personal--about her friend’s pic being rated for “hotness”]

--The movie is mostly long legal hearings punctuated by flashbacks. But it works.

--The debauchery portrayed is reality on campuses. Run of the mill. Yawn. Just another day/night on campus. Sad. I’d say PG-15.

--Geek-characters like Strawberry Twizzlers (or are those Red Vines?) like every other type of character in Hollywood.

--Guys write code and conduct business while girls do shots, do bong hits, dance half naked, play video games, go psycho on their boyfriends, get coke snorted off their midriffs, etc. Where IS Gloria Steinem when you need her?!

--Bill Donaghy (TOBI speaker) pointed out to me the immortal words of VJP2G: "The task of every man is the dignity of every woman." He said this is his new mantra, and I'm convinced that's it is the solution to everything, especially after seeing "The Social Network"--a great movie--but ALL the women in it are bimbos except for Erica, Zuckerberg's "the one." Men have to think of ALL women as special and worthy of dignity, not just "the one" they want to marry (even when women don't act according to their dignity and stoop to be whatever they think men want them to be--a result of original sin: "He will lord it over you, but your desire will be for him."). The divine order is that men lead. Women are whole persons without "a man," and we can affirm ourselves, but we long for men to respect us, appreciate us, tell us we're beautiful, see us as whole persons, love us as whole persons, interact with/relate to us as whole persons. If MEN did this consistently, women would auto-correct their undignified behavior because it wouldn't get them anywhere: the men wouldn't want it, ask for it, or reward it. I'll say it again: IN THE DIVINE ORDER, MEN LEAD. I don't care how politically incorrect it is to say that, it's the truth. MEN, PLEASE LEAD US WITH LOVE, because the sad truth is that many, many women will do absolutely anything for you and your attention.

--David Fincher sure knows how to make a movie ("Fight Club," "Benjamin Button").

--How long before we have a movie on the beginnings of Google?

--HD shows that twentysomethings have wrinkles and crow’s feet! Much more realistic. But I still like b & w and soft focus. You may say that I’m a dreamer. But I’m not the only one.
____
*Hindsight is 20/10?

Email ThisBlogThis!Share to TwitterShare to FacebookShare to Pinterest
Labels: the social network