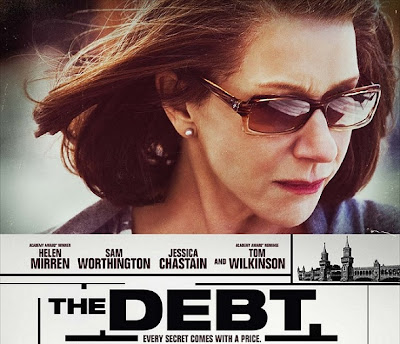 “The Debt” is a Nazi-hunter caper. It isn’t getting consistently rave reviews, but I thought it was a quite engaging and worthy vehicle. Just when you think you know what the ending will be, you really, really don’t. Trust me. And the ending takes many twists and turns. You will simply never guess the end, or even really know when you’re at the end. A definite “keep you guessing” movie.

The acting is beyond superb: Rachel (Helen Mirren/Jessica Chastain), Stephan (Tom Wilkinson/Marton Csokas) and David (Ciaran Hinds/Sam Worthington) are Mossad (Israeli) operatives who, in 1965, are on a mission to capture infamous Nazi experimental doctor-butcher, Dr. Vogel, “the surgeon of Birkenau,” (Jesper Christensen) who is a practicing OB/GYN in East Germany. Guess which one of the three gets to pose as a patient? Yeah, it’s that tense. Their plan is to take him back to Israel to stand trial and expose his crimes to the world.

We flash back and forth between the now-aged heroes in 1997 (Rachel’s daughter has written a book about her mother’s exploits) and what actually happened. It’s not all as simple as it first appears. Great storytelling! There are secrets seeded all along the way. Plans don’t go as planned.

We were taught at UCLA that a love story in war trumps all other stories (and did WWII ever really end for the Jews?), and that one woman between two men is the best love story. “The Debt” has all this.

The character of the Nazi monster is truly chilling in his calm, (ir)rational, clinical, evil hubris and hatred of the Jews. The ever-lingering questions are brought up: “What, were we all insane, then?” asks Dr. Vogel.

It’s a truly great and needed service to all of humanity that the Jews continue to tell many and varied stories of their Holocaust experience, horrific as they may be. The attempted extermination of the Jews is not “their” story, it’s “our” story. We must never forget. Each new generation must understand the cruelty that human beings are capable of, in order to do everything in our power to ward it off and stand guard against it.

Although David, as a young Israeli agent, says there is “no answer” to Nazi evil, it simply must be brought to justice, I think we do well to study it. A “recipe for disaster” existed in 1) German national humiliation after WWI 2) Godless science 3) stirring up a fanatical, outsized patriotism 4) a potent philosophy of power 5) just enough madmen as leaders and foot soldiers 6) and never to be underestimated: the Hitler Youth. One generation of indoctrination was enough to clinch the deal—“Train up a child in the way he should go, and when he is old he will not depart from it” (Prv. 22:6 KJB).

My one beef with the movie is that the dialogue is a little too on-the-nose. Sometimes it’s just a matter of an extra sentence that could have been left out. Characters frequently commit one of the arch-sins of screenwriting by telling each other what they both already know. “Hey, audience! Here’s some INFORMATION for you, or rather, we just want to make sure you were paying attention the FIRST time we said it! And, did you get that THIS HERE PIECE OF INFORMATION is related to that OTHER SCENE WE JUST SHOWED YOU? Just checking! Just want to make it ABUNDANTLY OBVIOUS even though we don’t doubt your intelligence for a second!”

Most unfortunately, “The Debt” is another film that’s rated “R,” that could easily be PG-13, in order for young people to learn some history through film.

--Jessica Chastain’s acting abilities on display here. (Anyone could have played the mother in “Tree of Life.”)

--Sam Worthington says so much with his eyes.

--Some excellent use of handheld filming!

--The fine movie about Cold War East Germany’s ubiquitous and paranoid surveillance, “The Lives of Others,” is excellent except for one point. A statement is made that a particular man can’t be a bad man because he liked a certain piece of classical music. Um, the Nazis had very refined tastes. The ability to appreciate beauty (and rape, plunder and pillage the art and other treasures of humanity for one’s own enjoyment) is indicative of nothing in one’s character, really.

--A must-see documentary is “The Eichmann Trial”—live footage of the Jerusalem trial of Hitler’s designer of the “Ultimate Solution” (strategy/logistics for how to exterminate the Jews). Eichmann was eventually hanged in Jerusalem.

--The Nazis created hell on earth.

--The three are not supposed to “listen or talk to” the Nazi “doctor” while he’s in captivity. Why? Because, like the devil, he is utterly cunning.

--Life is ALWAYS a spiritual (at least) battle. We are ALL God’s secret agents for the good.

Email ThisBlogThis!Share to TwitterShare to FacebookShare to Pinterest
Labels: the debt