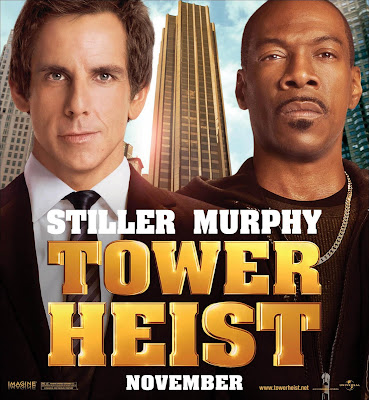 “Tower Heist” is one of those “almost” movies. It’s “almost” a good movie that “almost” achieved what it was going for. First of all, it’s difficult to define the genre: A satire? A comedy? A dramedy? Don’t be fooled by the Eddie Murphy billing. This is Ben Stiller’s film. But a rather serious Ben Stiller. Eddie Murphy comes into the picture far too late (I expected the audience in my cinema to start chanting “Eddie!” “Eddie!” while awaiting his delayed appearance. I almost started it myself.) Then, when he finally shows up, the missing-in-action-at-the-movies-for-far-too-long Eddie Murphy, the funniest guy in the room, spends much of his time standing around silentely like chopped liver in this semi-ensemble flick. Tres disappointing.

Ben Stiller (consistently fabulous) plays Josh Kovacs, an upright, conscientious building manager of an upscale apartment in New York City--a whiz at his job and someone who has a heart for all the “little people,” the domestic staff. Arthur Shaw (a very effectively heartless, soul-less, icy-eyed Alan Alda) is a Bernie Madoff-type who lives in the building and is indicted for securities fraud—if only the FBI can prove it—that directly effects Josh and the building staff who trusted Shaw with their money and pensions. Eddie Murphy is Slide, a petty criminal who lives near Josh and whom Josh eventually enlists to help get his and his staff’s vanished money back.

The rest of the cast is truly star-studded: Matthew Broderick, Casey Affleck, Gabourey Sidibe, Judd Hirsch, and Tea Leoni who gives a show-stealing performance as an unlikely FBI agent.

The story-line hangs together very well, albeit at a slow pace that never quite revs up. The tee-hees are sparsely spaced. In the end, the whole point of “Heist” seems to be a kind of revenge fantasy in the spirit of Occupy Wall Street. The soundtrack is a monotonous super-cool, bass-driven loop.

There is an interminable sequence that takes up a good portion of the second half of the film involving a very expensive sports car and the Macy’s Thanksgiving Day parade. (What is it with filmmakers and iconic parades?)

Unfortunately, this PG-13 film is littered with frequent, graphic, offensive and over-the-top sex banter that really crosses the line for a PG-13.

“Tower Heist” is illustrative of the Gospel for the Thirty-Third Sunday in Ordinary Time: “He who is faithful in little things will be faithful in greater,” both in a positive dimension (Josh Kovacs) and a negative dimension (Arthur Shaw).

The great lesson to be learned from “Heist” is that the underdog can fight back and win, but there will be a price to pay. This was so well executed that the folks in my cinema clapped at the end of the film—I could actually feel the applause coming—not so much for the film, but for the righteous point made.

--Why don't male Hollywood actors DYE their graying hair? They would look soooo much younger. This means YOU, Denzel, Ben Stiller, Matthew Broderick, (Clooney, you're OK). Alda and Hirsch--it doesn't even matter.

--Casey Affleck rocks, but this part was below him and he knew it.

--"Heist" needed way more funny. But the funny was funny.

--A few "Jesus Christs." Even one is too many. ESPECIALLY in a comedy.