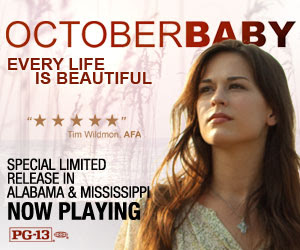 Don't think God or your baby can forgive your abortion? You need to see this film. Opens March 23.

“October Baby” is the story of nineteen-year-old Hannah (Rachel Hendrix), who survived a botched abortion. The film is being released by Provident Films (Sony’s Christian division). Most recently, Provident Films brought you the fine “Soul Surfer” and awesome “Courageous.” “October Baby” is a much smaller, more intimate film, not your typical big screen fare. It’s seems to be loosely based on real-life abortion survivors’ stories (e.g., Gianna Jessen and Susan Smith). 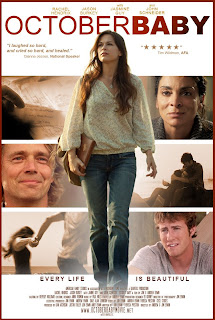 Hannah’s parents never told her about the circumstances of her birth. All she knows is that she has multiple health issues, nightmares and severe low self-esteem. A seizure while she’s acting in a play at her university brings everything to a head. The big reveal(s) to Hannah come early in the film which is a refreshing change from dragged-out movies that arrange the MOST monumental reveals toward the end. Hannah sets out on a journey to resolve her dark issues, with the help of a childhood friend, Jason (Jason Burkey—a Roger Daltry lookalike). The surprises and additions to Hannah’s complete story just keep coming in an organic and believable fashion. “October Baby” is certainly about a hard-hitting, unknown aspect of abortion: some babies DO survive. But “October Baby” is such a soft-sell that it ALMOST feels unsensational. This being said, it’s still a MUST-SEE film. The second half of the film is also WAY better than the first half.


Anyone who has ever been involved in an abortion in any way will find much to explore and relate to in this compassionate film. The abortion nurse (Jasmine Guy) executes a truly Oscar-worthy monologue, and Hannah’s birth mother (Shari Rigby) also turns in a moving performance (be sure to stay for the credits to hear Shari’s story!). Of course, this was a very difficult film to make--because of the intense emotional drama penetrating the story--but at times Hannah’s acting/lines/reactions just do not seem to have enough depth. The film seems to be trying very hard to maintain an extremely sweet tone. (I personally don’t mind enveloping something like abortion in kindness and gentleness. It’s like bringing love and beauty into an ugly situation—and showing people that life doesn’t have to be ugly and brutal--but I wonder how it will effect audiences who aren’t already pro-life. Will they see it as overly sentimental, cloying? I don’t know. But they certainly can’t argue with the “rougher” characters experiences—the abortion nurse and birth mother.)

Does it feel like a “Christian film” (in the pejorative sense that even many Christians regard Christian media: pollyanna, easy biblical answers, saccharine, goody-two-shoes, literal Deus ex machina solutions)? Yes and no. “October Baby” doesn’t have the tone of the relatively grittier “Soul Surfer” or “Courageous,” but it faces head-on extremely unpleasant life circumstances that even Hollywood shies away from. The pace is slow, reflective and Southern (which IS true to life in the South), the parents are typical Evangelical southern Christian parents, which may seem unrealistic to the rest of us, but I assure you is not. The jokes are alternately groaners, corny and contemporary, but almost always delivered a bit ham-handedly.

There are skittish scenes involving Hannah and Jason and sleeping arrangements, with a lot of missed opportunities to talk about the value of virginity, the value of waiting for true love, respect, etc. The dialogue at these points is almost unfollowable. Hannah declares her virginity--Jason says hardly anything.

A shining and unique element to this story is a strong father-daughter relationship (cf. song “Butterfly Kisses”): a true thread pulling all through the story. I questioned the parental control Dad had over a nineteen year old, but, again, this is the South, and today’s younger generation does have that close live-at-home, greater-acceptance-of-authority, prolonged adolescence mentality. AND this is not portrayed as a completely good thing, but as one of the father’s problems. Because of the father-daughter relationship, AND for the honest dealings with abortion, I would definitely call this a THEOLOGY OF THE BODY FILM. Men should definitely see it, but it’s also a WOMAN’S FILM (not to be confused with “chick flick”). And the pickings in this category are very slim. Anorexic. There are way more TOB films for/about men.

The fact that the screenwriters were one male, one female is obvious. The film really has a woman’s touch. YAY for male/female film collaboration!

“October Baby” joins a filmography that shows us what a “civilization of love (and life)” looks like. Human beings are THE most social beings on the planet, and badness and goodness have huge ripple effects out toward all kinds of “strangers.” Everyone is a link, a part of a huge web touching countless other lives at all different points. This is also a great FORGIVENESS movie. Can you imagine something harder to forgive than what Hannah has to forgive?

--Much of the story development, subject matter, plot points and dialogue are even better than the execution. This is a compliment. OB could have been much more powerful using much of the same material.

--Every minor character gets a PERFECT wrap-up at the end. This is sooooo much fun to do as a screenwriter and almost irresistible, but may cause “Really??” moments.

--The young adults struck me as supersweet and wholesome. Again, this can be the reality in the “Christian culture” parts of our country, but I think “OB” might get slammed for this. Oftentimes, these college students sounded/acted more like high school students.

--As is the custom today, feigningly delicate (but actually big and brassy), heartwrenching, acoustic, truncated pop songs fill the empty spaces (cf. “Twilight” series). I think it works. However, they chose some pretty darn abominable and annoying instrumental synthesizer (yes, synthesizer) Muzak for the most poignant moments. It sounded like mediocre stock music. I kept trying not to be aware of it, but couldn’t help it. If they had only gotten better music for the many important parts of the film where they used it, the PRODUCTION VALUE would instantly have improved IMMENSELY. If anyone told them this earlier on, they should have listened! Eeeeeek! Working on a documentary film as I am now, many have warned me about the importance of stellar AUDIO. I think I’m gonna heed ‘em.

--I would love to have seen “October Baby” directed by the likes of Alexander Payne (“Election,” “Citizen Ruth, “About Schmidt,” “Sideways,” “The Descendants”). Christian filmmakers need to learn to stare directly into the sun like their secular counterparts. Christian filmmaking is coming way up and improving by leaps and bounds all the time, but we are fighting a huge CYNICISM based on people’s real, cynical experiences due to being raised by real cynical parents in real cynical homes, where people do not have an understanding of “the human,” or human dignity--so they conclude (when they see any kind of “Christian” film): “no one acts/thinks that way,” “Christians are afraid of life, to really LIVE,” “that’s not real life.” We are dealing with a real lack of hope and optimism, so the more hardcore we are—when appropriate—the better.

--I find that Christian films ARE going to the issues, but they soft-pedal them (Hannah wrote some pretty heavy stuff in her journal, but it was downplayed in the dramatic treatment of it). I find Hollywood tends to skirt or dismiss a lot of important issues because they know they just have no answers to give, OR they do a brilliant job of portraying the issues, but encased in nihilism, hedonism and despair. Often happy despair (what could be more American?). As Larry Norman said, “No one leads such a charmed life that they don’t have huge sorrows.” We, as Christians, should be “experts at the Cross” so we can meet people in their suffering. And be able to portray this suffering well in film. No one could accuse Hannah of having a charmed life once her past is revealed to her, but the hope is that people will see how much being Christian, having her life open to God, and coming from a loving family helped Hannah face horror.

--It's always such a dilemma for me: Do we SHOW sweetness so people will know what's possible, show 'em what it looks like? OR do we get more gritty to win their credulity?