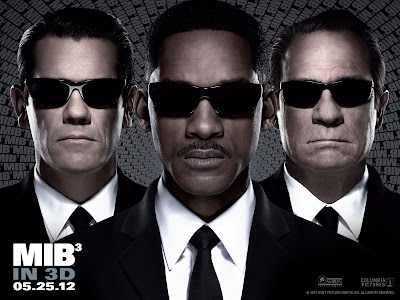 Sequels are hard to do. “Men in Black 3” is no exception. After an attention-grabbing, keeping-in-the-MIB-mode (and a once-only-ultra-risqué scene) opening, "MIB3" strives in a ho-hum way to maintain the MIB quirky vibe and “odd couple” relationship between Agent J (Will Smith) and Agent K (a wan-looking Tommy Lee Jones). Each actor does their best with mediocre, drawn-out, contrivedly intricate situations and dialogue. The beginning of the film goes on and on with a one-note joke about Agent K’s sour countenance and disposition.

The plot? Agent J must go back in time (to the 1969 Moon Launch) to save Agent K so that he can save the world. Along the way, he learns a few secrets of the past. (Therefore, most of the movie is without Tommy Lee Jones. Josh Brolin plays the younger Agent K.)

The villain is “Boris” (NOT “Boris the Animal”)—from an almost-extinct race of aliens—who is pretty ticked about Agent K having blown his arm off. He’s determined to go back to the past and retrieve his arm.

A tedious but sweet, altruistic alien named “Griffin” helps our heroes with his clairvoyance and ability to see ALL future possibilities.

The premise is still fun: The world isn’t what you think it is—there are undercover good guys keeping the world going, saving us from danger. Even Andy Warhol (a truly funny gag). There are lots of squishy, gooey, gross, evil life forms to be subdued. But sentient beings (albeit CGI) are also treated rather brutally—even a “human” head used as a bowling ball.

"MIB3" is colorful; well-lit; chock-a-block with special effects, goofy and exotic aliens; Josh Brolin does a fantastic job as a younger version of Tommy Lee Jones, but the film doesn’t MOVE. Even though we are told how urgent everything is, it doesn’t translate into heart-pumping, mind-tickling action. Much of the clever, interspecies shoot ‘em up gyrations take place in a Chinese restaurant, but it seems like the movie’s budget was primarily expended here (and in Act 3 at Cape Canaveral) and the rest of the film simply strolls along.

As much as I love Will Smith and Tommy Lee Jones, "MIB3" is only mildly funny, mildly amusing, mildly interesting. Even with the bright addition of Emma Thompson as “O”--J’s and K’s British boss--and a truly BIG SURPRISE ending, nothing serves to light the story/screen on fire.

If you want my humble opinion, I would say that MIB3 is just not worth the price of admission or your precious time.

--One sequel (not adapted from a ready-made trilogy or series of books) that I think was BETTER than the original: “Ace Ventura: Pet Detective.”

--Reading through my notes taken during the movie: “I’m not laughing yet.”

--The old, avocado push-button phone! My family had one just like that.

--I think after viewing the sharp, smart “What To Expect When You’re Expecting”—“MIB3” is just so draggy in contrast.

--Undercover agent at Warhol’s “The Factory”: “Get me out of here. I can’t listen to any more sitar music and I can’t tell the men from the women.” :]