A new DVD is out about an oft-forgotten topic and oft-forgotten souls: “Purgatory: The Forgotten Church.” We’re used to thinking of the Church on earth as “the Church Militant” or “the Pilgrim Church,” and the Church in heaven as “the Church Triumphant” or “the Church Glorious,” but there’s a “third” Church--that of the suffering souls in purgatory. It can be too easy to dissociate ourselves from “souls,” but these souls are actually people we know, our loved ones, relatives, friends, acquaintances who are being purified and readied to be with God forever in heaven’s unending, ever-increasing bliss.

The Church has a custom of praying for those we don’t know, also, just generally praying for “the souls in purgatory,” “the poor souls,” and “the most forgotten souls in purgatory” who may have no one praying specifically for them. Why do we call them “suffering” souls? Because they are in intense spiritual agony, longing to be with God. At death they met Him, everything has been clarified for them (what is truly of value, where their desires should be directed), and the “suffering” is simply an overwhelming desire to be with Him.

Why do the souls in purgatory need our prayers? While we’re on earth we have free will, right up till the moment of death. After death, the souls in purgatory can no longer “help themselves,” so our prayers can avail them. In turn, their prayers and sufferings are precious to God and are able to help us. Such is the “communion of saints” and the interconnectedness of the Church, the Mystical Body of Christ.

Chicago-based filmmaker, Friar John Clote, an investigative journalist before he entered the Conventual Franciscans, has delved extensively into this subject to produce a comprehensive 75-minute film filled with authoritative information and inspiration. Cardinal George is interviewed along with great “friend of the holy souls,” Susan Tassone, and others. 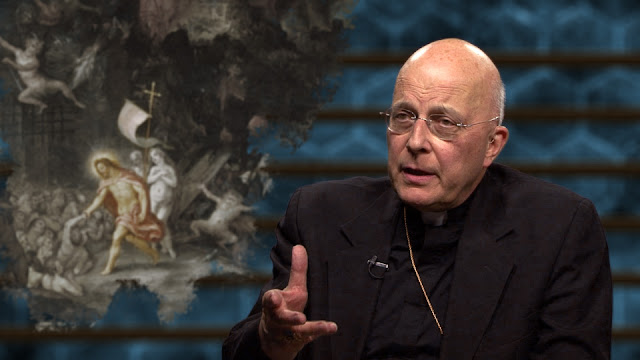 CNW: What inspired you to make this film?

John: I’ve been interested in this subject for years. My Mom passed away in 2008, and that experience of being a grieving Catholic, and having Masses said for her, that made me think about how I would approach this in a film.

I began praying in a Eucharistic chapel in Arizona, praying for my Mom and Dad and all the people I knew who had passed away, friends of my family and my friends. I began thinking of people who weren’t like my Mom who had many people praying for her. She had lots of friends who were devoted, prayerful Catholics. I kept thinking of deceased people I knew who didn’t have these people in their lives.

CNW: What did you learn in the process of making this film?

John: There’s a spiritual connection that exists between the living and deceased: Earth, purgatory and heaven. The theological definition is “the communion of saints,” but there can also be a tangible component sometimes when the veil between this world and the next thins in varied ways, in beautiful ways that can lead one to believe or reconsider unbelief that there really is something beyond this world.

In the film, we talk about near-death experiences and the development of the Church’s doctrine on purgatory. The idea of purification after death is not unique to Catholicism. The ancient Greeks had an idea of it, too.

CNW:  How has making this film changed you?

John: It has reinforced for me the specific notion that our relationships don’t end here. The love and appreciation—even though we are missing the sense of people’s physical presence—doesn’t end, but translates into a higher form of communication through prayer. I believe the deceased in purgatory can hear us more clearly, understand us more profoundly, and pray for us.

CNW: What are some misconceptions about purgatory?

John: First, that it doesn’t exist, and second, that it’s some kind of antechamber of hell, that it’s “down there” with some kind of trap door to get out. The four misunderstandings that we deal with in the film are: 1) time and space 2) indulgences 3) suicide 4) the motif of fire as the chief form of purgation. Much of the Church’s art, especially from the Middle Ages, depicts purgatory as fire. The focus really is on God’s love, God’s love as consuming fire coming from His Sacred Heart. That kind of fire. Nothing impure will enter heaven. We will be with an all-holy God, so His love needs to purify us so that we can become  a reflection of who God the Father really is.

CNW: What do you want people to take away from the film?

John:  Jesus Christ has unfathomable mercy and love for His Creation and all of us, and we need only ask to be enveloped in that Love. Purgatory is just another expression of God’s profound, unfathomable, incomprehensible mercy. 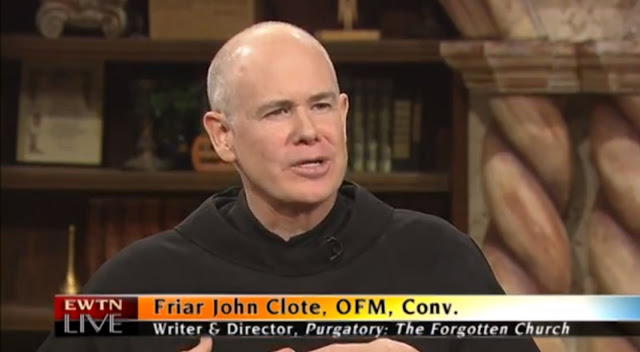 John B. Clote is a Conventual Franciscan friar, broadcast journalist and filmmaker. He is currently studying to be ordained to the Catholic priesthood. After several years as a producer and writer at NBC News in St. Louis he began working in catholic media producing more than a dozen films and documentaries for The Mercy Foundation. John was one of the last journalists in the world to conduct a televised interview with Blessed Mother Teresa of Calcutta and Saint Faustina Kowalska’s last surviving sibling. His films and work have appeared on NBC, ABC, CBS, PBS, and EWTN.

NOTE FROM SR. HELENA: I have seen several of John’s documentary films (you probably have, too—they’re in constant rotation on EWTN). Amazing! His masterpiece really is the life of St. Maria Goretti: “Fourteen Flowers of Pardon.” He has also done DVDs on Solanus Casey, Fr. Seelos, Little Audrey, John Paul II and Mother Teresa.