MOVIES: "TO THE WONDER" 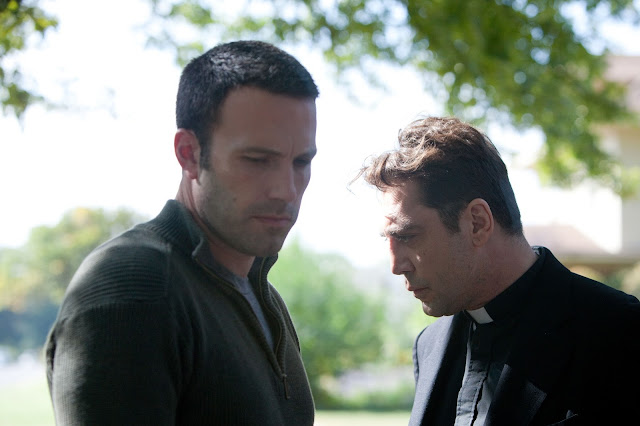 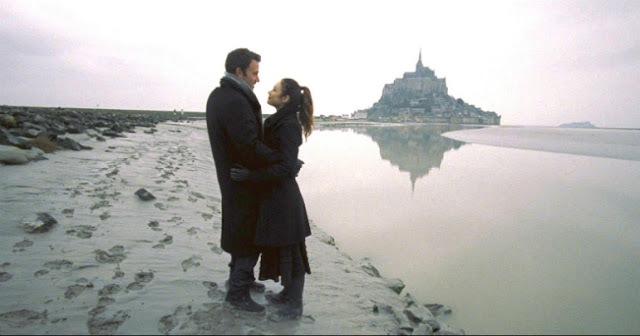 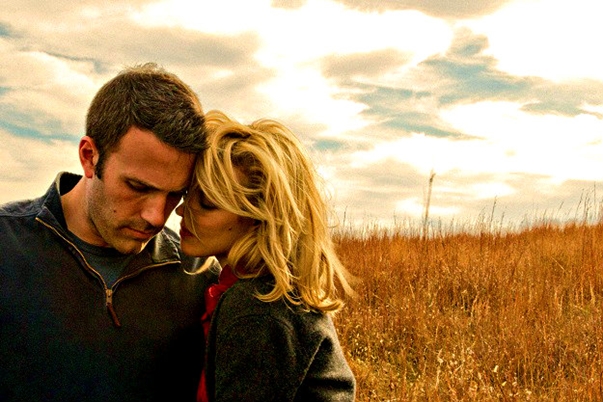 Terrence Malick's ("Tree of Life") new film, "To the Wonder," is, at best, a bit of a disappointment, and, at worst, looks like one long perfume commercial.

Malick employs his now trademark elegant, open, airy, spacious camerawork  (although many shots/scenes are far too reminiscent of “Tree of Life” itself) to tell the story of Marina (Olga Kurylenko)—a waifish French single mother with a pre-teen daughter, Tatiana. Marina falls for American, Neil (Ben Affleck), in her native Paris, and he takes her and her daughter back to the flatlands of Oklahoma. But Marina can’t marry Neil because “in the eyes of the Church” she is still married to her husband who abandoned her and her daughter. She does not state this bitterly, because she is a woman of faith, prays and goes to Mass.

The profound, dedicated but troubled priest at the parish is Fr. Quintana (Javier Bardem). He seems to be going through a dark night of the soul where he feels he has lost God, can no longer perceive Him, and yet he still carries on and prays intimate, Psalm-like prayers. As in many Malick films, characters constantly whisper prayers and converse with the Divine as easily as they do with the human.

Neil and Marina and her daughter share joys, tears and fights. Much of TTW is about the male-female romantic relationship. Most of the dialogue is either snatches of people’s thoughts or snatches of conversations that are purposely not in sync with the visuals. People’s mouths move and the words come out before or after (sometimes it’s easy to lip-read). I found TTW even more “impressionistic” than “Tree of Life.” Malick’s impressionism is decidedly not everyone’s cup of tea. Malick makes what I call “meditation films” that require your full, undivided attention. TTW also has lots of subtitles because French is spoken and even a little Italian. I, personally, like his films, but you have to be in the right mood and feeling very patient.

SPOILER ALERT! I’m doing spoilers because people are asking me what I think especially of Malick’s handling of Church stuff. Malick’s films are intensely Catholic, in every sense of that word.

Marina’s visa runs out and she returns to France. Neil temporarily takes up with Jane (Rachel McAdams),  an acquaintance from his youth, with whom he also fornicates. But Marina eventually returns, and she and Neil marry, first in front of a justice of the peace, and later in the Catholic Church (it’s not explained if she got an annulment).

Neil barely says a word throughout the entire film. He seems like an OK guy, only very indecisive and afraid of commitment. We never get to know him at all. Only the women speak. What do they speak of? Love. Desperately wanting Neil.

As always, Malick can’t get enough of the beauty of nature, and his camera lens/eye seems to just keep wandering off to it in the midst of human travails. It reminds me of a saying from Rumi:

"But listen to me. For one moment quit being sad.
Hear blessings dropping their blossoms around you."

Malick finds God in nature, and, I believe, uses “nature interruptions”—shot at all times of day (he’s particularly fond of dusk as I am) to keep hammering home the delicious and consoling fact that we are  truly “surrounded” (a huge theme in this film) at all moments by God-Love. Magnificent, hoary bison even “surround” Neil and Jane at one point. “God in Malick’s Films” would be an excellent filmic study.

Malick must be beside himself with delight at what today’s film technology enables him to do. Since he uses an abundance of natural light (even indoors), his movies can look like they were shot on film.

TTW is not a “mature” film.  It is almost childish and seems to lack the forethought and careful planning of “Tree of Life.” TTW feels like an unnecessary film. I almost fear it will mar his “Tree of Life” legacy. Malick could have just ceased filmmaking after “Tree.” It cannot be topped—not that the esoteric director is even trying. He’s often like a photag-enthusiast, a kid or film student with his first camera, let loose upon the world.  As Michael Phillips of the “Chicago Tribune” asks: For Terrence Malick,  there can ever be too many fields of waving grain in a film? Phillips answers his own question with a “no.”

As much as Malick’s camera loves human beings, it loves nature more, and would be content to silently, wordlessly make us stop and contemplate it forever.

--Nobody has anything to do. Oh, Neil LOOKS like he’s doing a job once in a while. They go shopping once, and toward the end some dishes get washed. That’s about it. But maybe that’s the whole point? We are busy about nothing, when we should be busy about each other? The important things in life? Love? Remember, in the Garden were only Adam and Eve.* And the Garden. I think this is Malick’s great nostalgia.

--Marina, Tatiana and Jane’s dancing around and jumping on beds gets very tiresome. I realize that, at least on Marina’s part, it could very well be French whimsy, but—in the immortal words of “Monk” (via Randy Newman): “I could be wrong now, but I don’t think so.” I think it is rather Malick’s idealized vision of woman: the woman-child.

--The house in Oklahoma is never fully furnished. Doors to the outside are left open, and messy boxes are always in a state of being packed/unpacked. Horrible impermanence.

--The old Black guy at church (and old lady who says—offscreen!—she will pray for him) trying to help their priest FEEL God again!

--Lots of great quotes: “Jesus does not let us avoid choice. We MUST choose.” –Fr. Quintana
“Why do we come back down?” –Marina
“I thirst for You.” –Fr. Quintana

--Even though made by a man, and with a very strong central male presence, TTW, I think, is meant to be a woman’s film. A woman’s perspective on love. From a man’s perspective. :)

--Like “Tree of Life,” TTW is very reassuring: “All things work together for those who love God.”

--I have nothing against good-looking people, but the cast is far from ordinary in the looks department, and therefore a bit unrelatable, at least the women.

--Maybe I’m a cold-blooded fish, but I didn’t really feel sorry for anyone in this film, except Tatiana, and maybe the priest.

--*SPOILER ALERT: I almost feel that when Tatiana goes to live with her father, she was finally “out of the way.” It’s as though Malick only wants Marina and Neil together, forever young (even though there are hints of children throughout the film), forever sharing a new, young love.

--The love-language between humans easily slips into prayer. Sometimes hard to distinguish whether a human or God is being addressed/talked about.

--TTW feels even more European than “Tree of Life.” I imagine the direction given to the actors: “Just do anything here. Twirl. See how many ways you can twirl.”

--Some scenes (especially the fights and lovemaking in the front windows) beggar belief and border on the ridiculous.

--Definite theme of: “We don’t need anything. Only ourselves, God, nature, love.

--For all the lovey-dovey stuff, there’s very little chemistry. Like a perfume commercial. We hardly ever see Ben Affleck’s face, and if we do, it’s a side view.

--Marina’s Italian friend is the voice of unbridled, false freedom. “Life is a dream! You can’t make mistakes in a dream. Just go! You’re young—do what you want.”

“Love consists of a commitment which limits one’s freedom—it is a giving of the self, and to give oneself means to limit one’s freedom on behalf of the other. This might seem to be something negative or unpleasant, but love makes it a positive, joyful and creative thing.
---BJP2G, “Love and Responsibility”