DVDS: "MESSENGER OF THE TRUTH" & "POPIELUSZKO--FREEDOM IS WITHIN US" 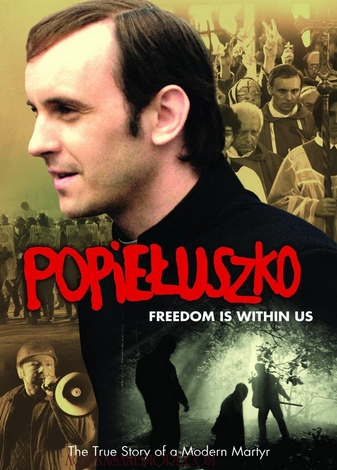 The documentary MUST BE SEEN FIRST! Unless you are intimately familiar with the events of Fr. Jerzy's life/Poland's recent history/Solidarity, you will NOT understand the feature film, like, at all. It was made primarily for Poles and is very sketchy with the historical framing and even the story flow. The documentary, www.MessengerOfTheTruth.com is EXCELLENT and was made by two Americans who gathered lots of actual footage (fascinating!) and tell us the whole story as if we knew nothing. 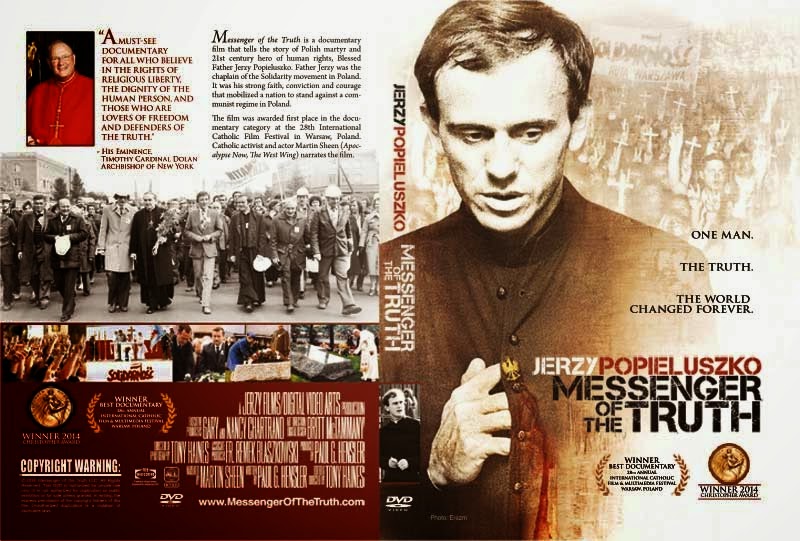 The style of feature film “Freedom Is Within Us” is European, the soundtrack often compelling. “Freedom” is well acted, and begins by cutting in deep to the time of Fr. Jerzy’s mandatory military service. Fr. Jerzy refused to cooperate with his commanding officers by praying aloud whenever he could, suffering bodily punishment for his infractions. This was good training for standing up to the government he would soon be in much more dire conflict with. Popieluszko was a humble, refined man—who attended to all the most delicate details of pastoral care--but he was also tough as nails.

The cohesiveness, religious faith and resistance of the Polish in the face of violent repression is well portrayed. The amazing thing about Polish culture is its unique unity across social strata: from the poorest manual laborer to the university professor to the students to the arts community to the episcopate (often of noble lineage).

We who lived through this period remember all the names, dates and places. For those who did not, the film is a bit chaotic at times, as it tries to organically introduce this information in a dramatic way, often incorporating actual footage of protests, news reports, strikes and John Paul II’s visits to Poland. But no matter. This is a story about a priest of the people who went out among them, participated in their deepest concerns, and “smelled like the sheep,” as Pope Francis has been telling priests they must.

The large-scale re-enactments are convincing, but the smaller action often lags with short vignettes meant to build relationships among characters, but it is often so choppy, disjointed, intricate, and arcane that it is unsuccessful. Coming in at 149 minutes, there are many small scenes that could have been eliminated. However, it’s a good film to watch to understand what must be done, what strategies work in the face of oppression. The lies, evil genius and devious tactics of the communists are on full display here, as well as the Polish people’s outwitting of them. Popieluszko had opposition from all sides, including his superiors in the Church. What was the prudent thing to do? What was the courageous thing to do? What was the right thing to do? For Fr. Jerzy, silence was not the answer.

--The intelligent, caring young adults (with a sense of history) I watched this film with did not understand that Russia occupied Poland after WW2, and that it was not a part of the USSR. They didn’t know that the Polish people themselves were the communists in their own country (instigated by Russia, of course). They had never heard of Cardinal Wyszynski or Lech Walesa, and didn’t know what Solidarity was. They also didn’t realize that the Polish people were forced to speak Russian in public matters (thus many Poles chastise their fellow Poles in the film by saying: “Speak Polish!”) How quickly history is forgotten and/or not passed one, especially recent history!

--Fr. Jerzy was ONE BIG PAIN IN THE POSTERIOR for those Commies. :D (Sorry, child of the Cold War. I say “Pinko,” too.)

--The Poles’ ability to spot the secret police. Ha ha.

--“What if they held a war and no one came?” What if martial law was imposed and everyone ceased obeying? That’s exactly what happened when they killed Fr. Jerzy. (This is not in the film, but a Polish monsignor told us all about it.) Fr. Jerzy’s death was THE turning point. The people said: “YOU KILLED OUR PRIEST? WE DON’T OBEY YOU ANY MORE.” (They had been complying with things like curfews, etc.) BJP2G threw the pitch and Fr. Jerzy hit the homerun. There is audio in the film of BJP2G praising Fr. Jerzy after his death saying that he should be a patron of Europe (must have been thinking of how Communism ravaged Europe).

--“Weak are the people who accept their own defeat…. But mighty are the people who build on truth.” –Fr. Jerzy.  In regard to his enemies: “I fight evil, not the victims of evil.” I would love to find more of his words/sermons/writings in English!

--Fr. Jerzy was brutally murdered. Probably horribly tortured while still alive. Scenes of his killing are in virtual blackness with sound effects. Interesting way to do it that spares us!

--The gargantuan role that Pope John Paul II played in the liberation of Poland is subtle but sustained. “Man creates his identity through culture, but not alone: through society.”--BJP2G Society matters and it’s about more than individual rights.

--There are many light and delightful moments, often in the midst of the tensest moments, and lots of witty Catholic humor. The humor is not dark, gallows humor, but more upbeat humor at the expense of the absurd communist system. The filmmaking missteps are mostly toward the beginning of the story. It’s too bad that film editors don’t often go back and fix faulty beginnings!