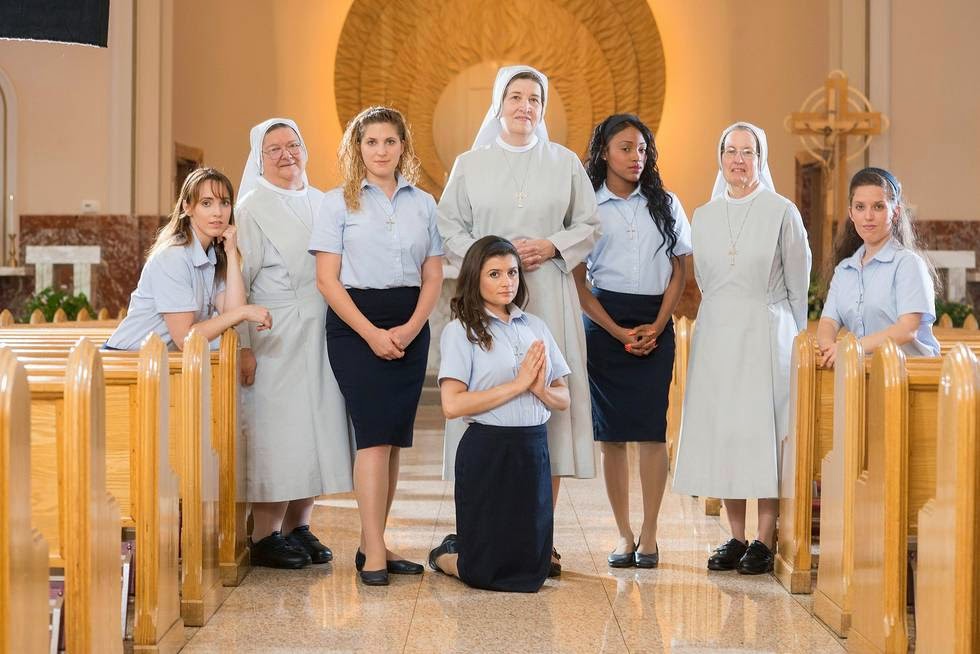 Reality TV about five young women discerning their vocation at three different convents? How could this be the proper vehicle? Won't the cameras interfere with or even hamstring this very personal and intimate process? Will it "work"? When I heard that such an animal was coming down the pike, I had great apprehension, even when assured that it would be "respectful," and that one of the producers is Catholic and loves nuns. This producer was taught by nuns and wanted to show the world how awesome nuns are. (Thanks!)

THE NUNS WHO KNEW TOO MUCH

Let me give my verdict up front. "Sisterhood" is wonderful. Even though it would seem--as a Daughter of St. Paul: media nuns!--I would jump at a chance to participate in such a project, I'm glad that we did not. But in the same breath, I'm very glad "Sisterhood" was made. I think as Daughters of St. Paul we are TOO media savvy to let the dynamic play out. It almost took congregations with a certain media naivete--as well as a trustworthy production company--to pull this off and capture the total experience, setbacks, breakthroughs, spontaneity, honest emotions, revelations, etc. (We Daughters of St. Paul are "The Nuns Who Knew Too Much.")

Being savvy media nuns, our postulants took full advantage of tweet-watching with the hashtag #RealPostulants and even hosted online Q & A sessions before viewings!

I have come to see "The Sisterhood" as an exciting new experiment with a generation totally, totally at ease in front of and behind a camera. For better or for worse, they are so used to externalizing every thought and movement of their souls, and publicly chronicling every aspect of their lives. Why NOT bring radical faith into the frame? A few times one of the young women and/or a nun demands the cameras be turned off, which shows an understanding that not EVERYTHING in a person's life should be seen/heard by the world.

The lovely young women are all in their 20's: Eseni (NYC), Christie (California), Stacey (Virginia), Francesca (New Jersey), Claire (Illinois). They visit three congregations: Carmelite Sisters of the Aged and Infirm (NY), Daughters of St. Mary of Providence (Chicago), Sisters of St. Joseph the Worker (Kentucky). It becomes clear early on that these solid, wise, true-blue nuns are the stars of the show! One young woman watching the show tweeted: "It has become apparent to me that I need a team of nuns advising my life!"

The production company, Hot Snakes ("Breaking Amish"), are masters, MASTERS of reality TV. The snippets, the bumpers, the interviews, the poignant moments are incredibly intriguing. They have a great way of making something look (through sly editing) that something is going one way, when it's not. Great reveals. We learn more and more about the young women each week. You will be hooked. But at first I was so afraid they would trump up the drama to make "discerning"--essentially a very interior thing--worth watching. The first episode is a bit that way, sometimes even feeling set up, or with "repeated" conversations for the sake of the camera. It even looks like the convent is a very scary, militaristic place! (Think "American Horror Story.") My Sisters and I--and our younger Sisters in formation--were very concerned: "This show is going to make young women AFRAID to discern!" We agreed, for example, that we would never traumatize a young woman with acne by insisting she can't wear make-up while she stays at the convent--and let her have a meltdown on camera over it. But, guess what? She got over it, with the support of the other young women!

The biggest drawbacks to this media format and what is being shown?

1. The production company vetted the young women and the nuns. They knew nothing about each other, and the girls had no idea what "the rules" would be or even what States the convents were in (so the raw initial reactions could be seized). At first it was a little misleading because of the subtitle: "BECOMING NUNS." What is really going on in "The Sisterhood" is a prolonged live-in (not just quick visit) "nun run"--with some young women who had barely begun discernment. In real life, this kind of intense live-in experience would be one of the last stages of discernment.

2. The nuns and the girls "talked about" each other in private interviews, sharing negative details and impressions. My understanding of the virtue of charity would prevent this, even if, in the end, everyone would see what everyone said and be OK with it. Even if, in the end it was "real" and "helpful."

3. The attitude toward cell phones. On our discernment get-togethers and retreats, we do not confiscate cell phones. We only strongly encourage certain modes of use at certain times. (NOW my "media nun-ness" is coming out!) The confiscating of cell phones at each convent was a real bone of contention for the young women. Two of the young women were very attached to their phones--mostly because of WHO they called: a mother and a boyfriend. It's true that (not just) our young people are rather addicted to phones/media devices today. However, if we just go whole hog with swearing off media use cold turkey and don't teach them, model for them how to use media well, they are left without media skills, self-discipline, and get the message that the Church is opposed to media. Yes, we need to learn how to unplug (and love unplugging as much as we love being connected) for many reasons, at many times, but the Church should be a leader (and nuns are female leaders in the Church) regarding optimum use of the latest media technology!

When cell phones first came out, people were so amused that we nuns (Daughters of St. Paul) had them in our pockets. I used to explain: "Well, we're media nuns." But I quickly decided that ALL nuns (except cloistered nuns BUT SEE COMMENT SECTION!), and priests, and religious people should have cell phones! If this is where people are at, where the culture is at, are we going to stand back and NOT engage in people's experience, NOT be a part of the conversation? NOT share the travails of modern life? NOT be digital missionaries? Rubbish!

REASONS YOU SHOULD WATCH

--snapshot of the faith of our young women today (the Millennials' faith and lack of it are much studied, and it's not a hopeful picture--but there's always another story, there are always individuals giving the lie to statistics)
--could help a young woman and her family in her discernment
--discerning the religious life is alive and well (close to 500,000 young married Catholic men and women in the USA have discerned religious life or priesthood)
--religious life is alive and well--smaller numbers, but alive and well
--get to know nuns
--get to know THESE particular nuns and listen to their wisdom
--get to know these amazing congregations
--see how closely related marriage to a guy is to marriage to The Guy. The nuns and girls really, really get this. I love how Darnell, "the boyfriend," says: "You want God? I have God in my life, too."

There are so many other details I would like to break down and assess, but I can't be a SPOILER! Are concrete decisions made by the end. YES.

One disturbing detail was the existing/persisting attitude of some of the young women toward chastity and pre-marital sex. The girls themselves reveal that two of them are virgins, at which two of the other girls were truly shocked, but not only shocked: completely uncomprehending! They expected virginity of one already nun-like girl--although they challenge her never having dated--but they are shocked by the virginity of the more "normal" girl! The attitude was: "But if you DON'T have sex with a guy you like, you will lose him and he might have been 'the one' you will marry." WOW. WOW. WOW. I know this is a completely common viewpoint/practice today, but it was just so taken-for-granted, so ingrained in these otherwise deeply faith-filled, faithful young women.

These young women don't even see how sex is profoundly related to their relationship with themselves, with God. Their attitude toward men is: "Of course you HAVE to give it to them. That's just the way the world is." This is not gender equality. These are NOT "liberated" young women in any sense of the word! Not in a feminist way,* not in a Christian way. They don't realize how their philosophy undermines their whole feminine self. And undermines the masculine self of every man they date, even if one of them becomes their husband.

It's one thing to say/believe: I don't always live chastity perfectly, but I try. It's another thing to say/believe: sex before marriage is no big deal. You have to/should do it, and virginity has no value. Any such cavalier attitude toward sex means: "The body doesn't matter. My body doesn't matter. I don't matter." I firmly believe this is one of the root-causes of widespread low self-esteem among women. Other women turn this "I don't matter" into a kind of ambitious, hardened drive toward acquiring.

The "normal" girl in question was shocked at their being shocked. She summed up her own ethos perfectly: "But why should I NOT be who I am for someone who is supposed to LOVE who I am and get to know me as I am?"

Such a crying, crying need for Theology of the Body. These young women--like our culture--has so much going for it, and yet is being eaten up alive from the inside out with a completely destructive understanding and praxis regarding sexuality: the place where we give and receive love and life with our whole person at the deepest level. And yet: "it's just sex"???

Check out this following news article that is similarly troubling on so many levels. Just like the Church's mishandling of the clergy sex abuse crisis, the Church's failure to teach and adhere to her beautiful vision of human sexuality has resulted in messes like this incident below. And the messes are getting bigger and more complex and far-reaching by the day. And this is just the tip of the iceberg. A precedent. A legal precedent. Expect many more such scenarios to follow: http://www.ncregister.com/daily-news/diocese-to-lose-2-million-in-teachers-ivf-lawsuit/

"The Sisterhood" is available for purchase at www.MyLifetime.com and on YouTube. Not available for download in Canada unless you have a VPN.


_______
*None of the young women said: "I like having sex. I want him to show me how much he loves me by having sex." It was just a huge cave-in: This is what guys expect and we have to give it to them.