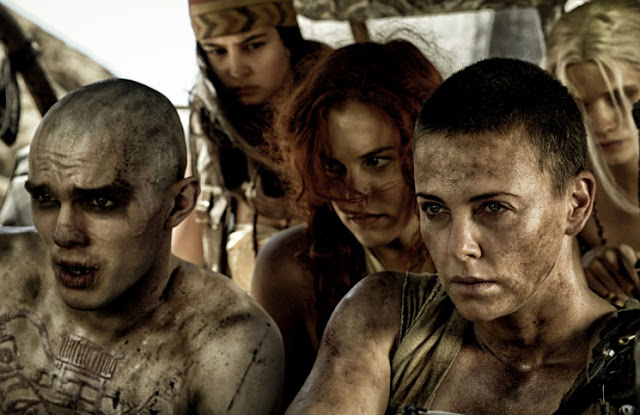 Oftentimes I am sure I'm going to like a movie and am very disappointed. Rarely am I sure I will detest a movie and turn out liking it. "Mad Max: Fury Road" is one of those latter films.
Although named for "Mad Max," this is not his movie. It's really Imperator Furiosa's (Charlize Theron) story. With her shaved head, calm, take-charge determination and hurt-but-gentle eyes, she quietly steals the movie from Max (the superb Tom Hardy--once again with a mask on his face) as the filmmakers no doubt intended. Indeed, Max's name is only revealed at the end of the film, and his backstory is never supplied. Theron carefully avoids falling into a one-note angry feminist rut in her portrayal.

The world of Furiosa and Max is dystopian with a capital "D." A hideous warlord, Immortan Joe, enslaves everyone: men and boys are warriors and laborers, women are warrior-breeders and milk-providers for the warriors (ISIS, anyone?). Immortan Joe controls the water supply in the arid desert and is beyond miserly with rationing. Furiosa attempts to rescue women chosen as breeders, racing across the desert in her "war rig." Max is strapped to the front of an enemy vehicle hot in pursuit as the "blood bag" (hooked up to a direct intravenous line) of Immortan's crazed and ambitious foot soldier, Nux (Nicholas Hoult, Hollywood's go-to ghoul). Max eventually joins forces with Furiosa, spurred on by vision of a little girl who calls him "Daddy."

The film is a non-stop war on wheels. The incredible chase scenes filmed in the Namib desert include trucking it into a massive (visual effects) sandstorm. There are pauses to regroup, reconfigure, catch one's breath, but I wish they didn't use the sparse fades-to-black at all. Completely broke the tension and took us out of the movie. The pace is hoof-pounding, but not heart-stopping, so we could've handled seamless transitions throughout the entire film.

The plot and dialogue are campy but high-minded comic book fare, with deep primal, mythical, Judaeo-Christian roots. There's A LOT to unpack here. Theology of the Body? Everywhere, and not always far off the mark, either. At one point, I realized this film would have been fine with almost no dialogue--it is that stunningly visual of a story. In some ways it reminded me of the brutal elegance of the war-fest that is the film "300," although very different in design. "Fury Road" could easily win Oscars for set design, FX, cinematography and editing. The soundtrack is spot-on with unique drums and beats and strains and sound effects that blend hand-in-glove with the action, except for a few trite melodramatic scorings. (Once again, from the reviews I read, I thought it would be over-the-top, ear-punishing cacophony, but it was not.) The pulse and action can be relentless, but it's not big and dumb, it's clever and mesmerizing. Luxurious attention is given to passing details. You blink, you lose.

The comedy exudes from the meticulously inventive world and characters that have been created. My favorite is the heavy metal guitarist dangling, marionette-like, from the front of one of the vehicles, who strikes up the soundtrack to each battle on cue--not so unrealistic, as we know music has carried troops into battle from time immemorial. My second favorite comedic relief is the half-gazelle, half-giraffe, supermodel breeder women who are inept damsels in distress one minute and mechanics and fighters the next.

One reviewer noted that there's "no sex." True, no sex (the verb). But there is so much about the sexual difference and procreation standing at the crux of the film. This is also a film about life and hope and the rawest of human survival. Furiosa and the women are heading to a garden that once existed, the land of greenery, the land of "mothers." The women are the keepers of seeds of all kinds. Indeed, so much of women's heroism involves living things, growing things, giving "the new person" a chance, protecting life, cherishing life, carrying life, nourishing life, bringing life to birth and fruition. These tasks are not presented as "women's burden" in "Fury Road," in fact they are presented as extremely valuable and privileged, simply that women should not be treated as "things," as the women's rebellious graffiti declares: "We are not things!" "Our babies will not be warlords!"

We have the two extremes in our world today: Women voluntarily and ideologically eschewing their bodies and motherhood as de facto slavery and some kind of biological tyranny on one hand; and semblances of the scenarios in "Mad Max" and "The Handmaid's Tale" perpetrated by the likes of sex traffickers, ISIS, and Boko Haram on the other.

The women are all good. The men? It depends. There are both male and female elders. Like "Maleficent" and "Frozen," "Fury Road" is women saving women (except that there is indispensable collaboration with men who are smart, good and necessary). But this is not a battle of the sexes. It's a battle of the good against the bad and ultimately against a despotic regime.

The body count is quite high, but the gore is minimal (or am I just jaded) and we don't see aftermaths of the extreme violence. The body-abuse is also huge to our heroes and our villains, so much so that out of the oh, 150 blows each receives, we know that just one would have polished each character off. All I could think of was how a career-ending concussion sustained by an athlete could also possibly shorten life or impair quality of life for good. But, of course, this is pure surreal fantasy that's ALL action.

The takeaway? Some things will never change. Men and women are indispensable to life, to each other, to society and human flourishing. But it's really not necessary to look like Rosie Huntington-Whiteley to be a part of that.

--"There's a power that comes with having a child. You've done something incredible that no man could ever do or understand." --Megan Fox

"The woman...[is] reflected in the figure of Mary. It is the figure that embraces society, the figure that contains it, the mother of the community. The woman has the gift of maternity, of tenderness; if all these riches are not integrated, a religious community not only transforms into a chauvinist society, but also into one that is austere, hard and hardly sacred."

"Christ is betrothed to the Church, a woman. The place where it receives the most attacks, where it receives the most punches, is always the most important. The enemy of nature--Satan--hits hardest where there is more salvation, more transmission of life, and the woman--as an existential place--has proven to be the most attacked in history. She has been the object of use, of profit, of slavery, and was relegated to the background; but in the Scriptures we have cases of heroic women that have transmitted to us what God thinks about them, like Ruth, Judith...."
--Archbishop Jorge Bergoglio