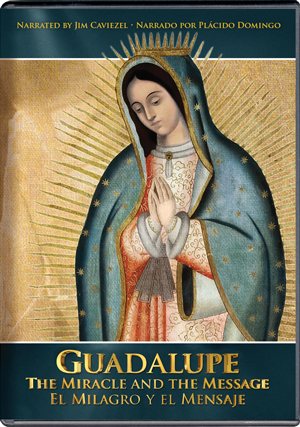 A beautiful new 60-minute documentary, "Guadalupe: The Miracle and the Message" (in English or Spanish), put out by the Knights of Columbus, lays out the story, history and significance of the Apparition of Our Lady of Guadalupe from the last days of the Aztec empire to the present. It's really not to be missed, even if you're very familiar with the story and have watched other documentaries and films on Guadalupe (as I have). What more is there to say about this incredible event, testament and relic--beyond its occurrence in Mexico City in 1531? A lot. Our Lady, Nuestra Señora de Guadalupe, Reina de las Américas, was just getting started in the sixteenth century. Her influence has only grown and reached out to all the corners of the world.

The Aztec religion was caught up in the frenzy of prolific human sacrifice, particularly human blood and hearts which--as the seat of life--they believed their gods demanded. Not only that, they believed that  Tenochtitlán, the location soon to become Mexico City, was the center of the universe and that the world would end without these sacrifices. (Mel Gibson's fine movie, "Apocalypto," depicts these sacrifices in all their horrific magnitude.) Catholic missionaries were not successful in gaining converts. The cruel Spanish conquistadors were wiping out the native population with diseases and slaughter--a kind of human sacrifice of their own making. The treatment of the Indians was so egregious that missionary Franciscan Bishop Juan de Zumarraga, called "Protector of the Indians," was ready to withdraw the very presence of the Church from the land ("strip the altars!" he had commanded his priests). The Aztecs were beyond demoralized. Robbed of their gods, culture, land and lives, they no longer saw a purpose in living. Something had to give. Divine intervention could not have come at a better time.

APPEARING TO THE ELDERS

Our Lady appeared to Juan Diego Cuauhtlatoatzin, a middle-aged Indian convert to Christianity, and not to little children as she subsequently seems to do. Why? Because she was honoring the elders, according to native tradition. Not only did she appear to St. Juan Diego, but also to his elderly uncle who was dying. (She cured him and revealed her name to him: "The Ever Virgin Holy Mary of Guadalupe," which some also translate not as "Guadalupe" but as: "the one who crushes the serpent.")

"I AM YOUR MOTHER"

Unlike other apparitions, Our Lady of Guadalupe had no urgent message. She didn't ask for prayer or fasting, only that a shrine be built. Her message was simply: "I am your mother." At the shrine she promises to the bishop that, regarding the Aztec people: "Here I will hear their weeping, their sorrow and will remedy and alleviate all their multiple sufferings, necessities and misfortunes." Her miraculous image appeared on Juan Diego's tilma (cloak) as a sign for the Bishop of the validity of her appearance and message. (The roses that had suddenly appeared on the barren Tepeyac Hill that Our Lady commanded Juan Diego to pick and bring to the bishop, were Castilian roses from the bishop's native Spain.)

OUR INDIGENOUS WINTER VIRGIN QUEEN MOTHER DANCING ON THE MOON

Our Lady of Guadalupe is probably the most fascinating of all Marian apparitions, and with the profoundest of meanings. It is the most visited Marian shrine in the world. Science is still not able to explain many, many things about the image, or why the tilma itself hasn't been utterly corrupted (as are all other contemporary samples of the same cheap fabric) after five hundred years of stressful conditions. The image is not only of an indigenous Madonna--much to the joy of indigenous peoples the world over, it is saturated with symbolism that spoke to the visually-literate Aztecs. She used all of their own signs and symbols to communicate a perfectly clear message: I am the Virgin-Mother of the True God. I am one of you. My Son and I are greater than your gods. I am your Mother who cares for you. She is depicted as dancing (dancing meant prayer to the Aztecs) on an eclipse of the moon (one of their deities). The stunningly specific communications just go on and on. They were so clearly understood that in seven short years--due to Our Lady's direct invitation--nine million Indians converted to the Faith. The words of Psalm 147:20 are engraved at the shrine today: "He has not dealt thus with any other nation."

CRY IF YOU WANT TO

This documentary is in the style of any History Channel piece. It begins with too-fast, old-MTV-style cuts, but simmers down quickly. Jim Caviezel's mystical-yet-definitive sounding voiceover lends drama (Placido Domingo narrates the Spanish version). The soundtrack is inspiring, and although we are not given all the voluminous details surrounding the apparition, the focus is on Our Lady's effect on believers through the ages. The brief re-enactment of Juan Diego and the beautiful lady are very pleasing. Many contemporary Church luminaries are interviewed, and I caught myself bawling a few times at Our Lady's solicitude for all peoples.

I would like to recommend a few other films on Guadalupe that I consider helpful to rounding out "the basics" of the significance of "Our Lady of the Americas." (To be watched in this order.)

1.  "Guadalupe" http://www.doscorazonesfilms.com/EN/guadalupe-movie.html  (English subtitles) Do NOT watch the hideous trailer. Starts with a hokey fake story about two rocky marriages in Spain, but once the couples travel to Mexico it gets good. Real good. Lengthy re-enactment of the Guadalupe event in Nahuatl with English subtitles (magical!)--and scientific explanation of image.
2. New Knights of Columbus documentary: "Guadalupe: the Miracle and the Message/El Milagro y el Mensaje" www.GuadalupeTheFilm.com
3. Our Lady of Guadalupe's significance for the pro-life movement. A must-see video by Dan Lynch: http://www.jkmi.com/our-lady-of-guadalupe-store/cd-dvd/our-lady-of-guadalupe-mother-of-hope-dvd-1
4. St. Juan Diego animated movie for da kids: http://www.jkmi.com/our-lady-of-guadalupe-store/cd-dvd/juan-diego-messenger-of-guadalupe-dvd … (by former Disney animators) 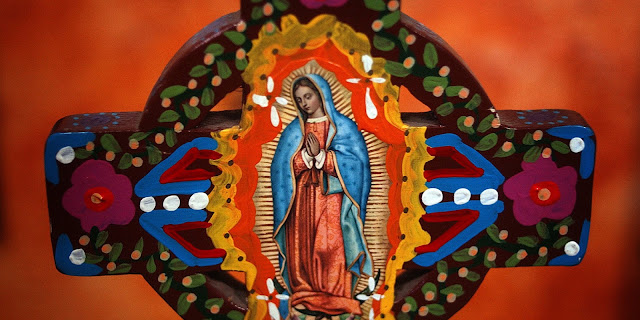