The 2016 Golden Globe Award for Best Picture was "The Revenant"--from a novel based on a true incident--starring Leonardo DiCaprio as a hunter-trapper who, mauled by a bear, is left to die by his companions. There's a little more to it than that, but that's the basic premise. I can't really compare this visceral (in more ways than one), lushly-filmed, gruelling-to-make film to anything else I've seen. It's part Western, part journey film, part revenge flick, part mercy flick, part historical rectification, but always a film-experience you will be totally immersed and lost in. "The Revenant" feels 4-D and makes us feel alive, not hypnotized or numb. We can almost smell the fresh air and taste the snow on our tongue. The film never blinks. The film never flinches. The film never looks away. The film never relents. Is it "all that"? Yes. Does it deserve accolades? Yes, fling lots of Oscars at it, please.

Although it's 156 minutes, the film does not feel long, and there are no dead spots in its masterful pacing. Lest you're afraid there'll be too much "Castaway"-style DiCaprio mumbling to himself in isolation's ennui? There's none of that. The entire film is interspersed with the doings and progress of several different groups, which all weave into the story without it ever feeling busy or like an ensemble piece: a band of Natives, a band of French, Fitzgerald and Bridger, the Captain and the rest of the hunters, the soldiers and settlers at the Fort.

What does "revenant" mean? A "revenant" is one who comes back from the dead to terrorize the living. Many are calling "The Revenant" purely a revenge film, but it's more than that. It's also about justice and the will to live. The will to live was biggest for me. Hugh Glass (Leo DiCaprio) had a son with a First Nations woman (presumably deceased because she whispers encouragement and appears when Glass needs hope--but not in a "nick of time, cue the ghost" kind of way--simply in a way that our loved ones stay with us). This son is a teenager and travels with the hunting party--but he is despised as a half-breed. Glass speaks harshly to his son in his native language in order to protect him from harm by the other men. 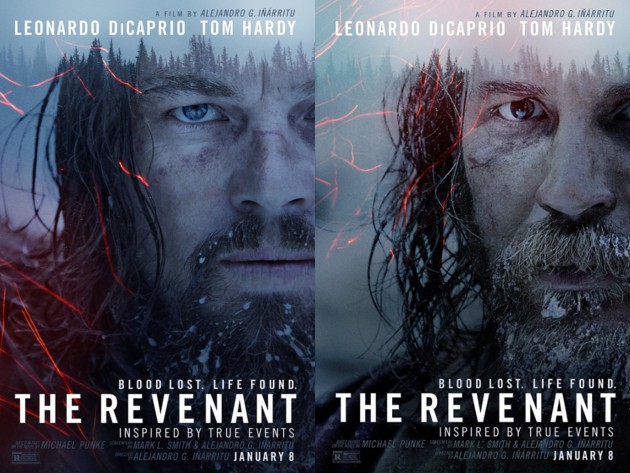 We know there's going to be big trouble right away. Fitzgerald (the incomparable and completely unrecognizable Tom Hardy) is a self-serving, weasely whiner who contradicts and rejects everything the well-respected Glass suggests they do (that always turns out to be the best thing)--after an ambush by a Pawnee chief and his braves, looking for the chief's abducted daughter. Hardy, affecting an unwavering Texas drawl, never shuts up as he alternately complains and taunts. Like Tom Sizemore in "Saving Private Ryan," you feel like he walked right out of the era he's portraying.

Fitzgerald/Hardy is old-world and blood-chilling and dangerous and untrustworthy and doesn't have a decent bone in his body or one iota of conscience.

IF IT BLEEDS, IT LEADS

Is it violent and gory? Let's just say there's lots of blood and guts, but it's never gross, over-the-top or gratuitous. This is a wild and disciplined film at the same time. Nothing out of place. If you just keep telling yourself "this is a film about raw survival," you'll get it. The scenery is all harsh beauty, much of it panoramic. You will be plunged into freezing waters and feel it, your lips will parch and crack.

DiCaprio's breath is amplified throughout the film as a clever ambient noise, to the point where it's almost a character or part of the soundtrack. That sounds in print like it would be annoying, but it's not. Every pain-drenched gasp and grunt and growl and groan is rhythmic and becomes our own. The camera is everywhere: extreme close-up, close-up, mid-range, long-range, just everywhere, almost like virtual reality, but without gimmicks. The camera is a participant deep inside the film which takes us with it and makes us the same. Glass' breath often fogs up the camera (purposely), as we enter into his travails.

HOW ABOUT THAT SCORE?!

The dialogue is meted out, rich without being poetic--and never superfluous. There is naturalistic background chatter that we're not meant to decipher, and what we can hear is not rarified and highly stylized. Life is not cheap in "The Revenant." Oh, and this is also a profoundly religious film. The soundtrack is original music by Ryūichi Sakamoto. It's mostly a sewn-in, atmospheric hum with something akin to drums, but not exactly (hints at First Nations drums, but also, perhaps, Japanese drums?) A cello is used sparingly--as cellos should be. The film was shot all over the world and made by an international cast of thousands. Financing from Hong Kong. I stayed through every last credit (and highly recommend doing so) just to continue being swept along by the thought-provoking, parts-of-your-soul-you-didn't-know-you-had-stirring, never-maudlin score that continues like an undercurrent till the bittersweet end.

Alejandro González Iñárritu is a very unique director ("Babel," "Birdman") but doesn't act like an auteur or indie-guru. His films are deeply entrenched in the best of Hollywood, the Hollywood that can enliven our imaginations and hold up a mirror to our humanity. It's meaty and earthy, but always polished. Not too much grit here: the Hollywood showmanship, glitz and glamour we love are never too far away.

--Although rated "R," I would guess that mostly for f-bombs. This is a great movie for younger mature teens (13+).

--"Revenant" is slightly reminiscent of "Noah," and the frequent wide-angle vistas are similar (but without the FX). The only detectable FX in "Revenant" are the animals.

--The instrument, ondes martenot (an early electronic instrument invented in 1928) is used wondrously in the soundtrack.
Here's a sample: https://www.youtube.com/watch?v=TrBUMZ7aNBQ, and here's a sample from the actual wondrous "Revenant" soundtrack (don't think martenot is in here):  https://www.youtube.com/watch?v=7CfCbM0wNPY

--Discovered a new filmmaking term in the credits: https://en.wikipedia.org/wiki/Greensman


--It's not white people bad, native people good. It's a little bit of a mix, but we definitely see the cruel oppression and injustice done to First Nations peoples.

--"If you can take just grab another breath, you can live."

--This film could also have been called "Breath."

--LOTS of women and First Nations people worked on this film. (Women always excel at: casting, costumes, makeup, but this film has women in many other key positions as well.)

--Please see the COMMENTS section regarding the improbability factors. :)