MOVIES: "THE SECRET LIFE OF PETS" 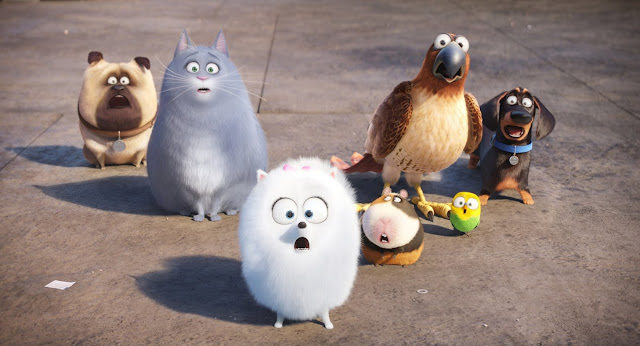 With a juicy, promising title and a screen populated with adorable, fuzzy furballs of varied shapes and sizes, the animated smash hit: "The Secret Life of Pets" is a fun Summer escapade for all ages.

Instantly relatable to pet owners (and kids who wish they were pet owners), the different personalities of species and dog breeds are, well, typecast. The goofy guinea pig, the self-involved cat, the excitable Pomeranian, the slaphappy bulldog, the stalwartly devoted Jack Russell terrier, the conniving alley cat, to name a few. The same simple dog logic of "Up" is employed here.

All is well in the uneventful lives of the New York City humans' lovable housemates (the biggest crises are the daily exoduses of owners going to work). The furry and feathered friends communicate with each other via fire escapes, air ducts, etc., and go about the mundane mischief that pets are wont to engage in in the absence of their humans: getting into the fridge, knocking things over, etc. (These pets are also a little more sophisticated, as they know how to turn on kitchen appliances, music systems and TVs.) If you saw the trailer, you must have howled (pun intended) at the elegantly trimmed, stately white poodle ("Leonard") who turns on heavy metal and begins headbanging as soon as his master his out the door.

Max, the loyal terrier (voiced by Louis C. K.), is owned by Katie, whom he adores and quite literally lives and breathes for. Gidget, the white Pomeranian (who's addicted to telenovelas when her master isn't around), is madly in love with Max, who barely knows she's alive. When Katie brings home Duke, an overgrown, selfish and dopey sheepdog (looking like a monster from "Where the Wild Things Are") who moves in not only on Katie, but on Max's food and sleeping quarters, Max hatches a plan to get rid of him. While the neighborhood canines are outside being dogwalked en masse (the dogs' gossip-chatter is a hoot), Max and Duke break away and become separated from the group. And, of course, never far behind a vulnerable lost woofer in these tales are the dastardly dogged...(drumroll)...dogcatchers!

Max and Duke become entangled with the dangerous sewer gang of  "The Flushed Pets." Yes. Just like it sounds: those pets rejected by their owners (even though some species in the squad are definitely unflushable). Led by what has to be the world's most sinister bunny, Snowball: an impossibly cute, white, bucktoothed, dewy-eyed lagomorph (voiced by Kevin Hart) who is decidedly unhinged. The goal of the FP's is the destruction of humanity, viz., pet owners. Guilty by association are any pets LOVED by their owners, who meekly submit to domestication ("leash lovers"), so Max and Duke must prove their street cred.

The intensity and violence of the vengeful pets might be a bit extreme for wee humans in the audience, however, the danger had to be real for our protagonists. Needless to say, the pets from the block are determined to rescue Max and Duke, led by the smitten Gidget. (Now we not only have women saving women in films: Maleficent, Frozen, Spy--we have the princess saving the prince.) And of course, all of this is done in a day's work. The unsuspecting humans have no idea what their darling charges are up to.

The element of surprise is constant and the occasions for laughter are frequent. Not explosive, eruptive laughter, just a steady stream of unexpected giggle ripples. The gags are mostly visual, and because of the rapid chase-pace of the film, the eye is catching the hilarity before the brain rationally puts together what's actually going on.

At one point, there are three roving bands of pets on the streets--keeping the intrigue lively. Towards the end, a magnificent character is introduced: Pops, an old hound dog with wheels for his paralyzed hind legs. A few sequences could have had snappier dialogue, such as Gidget and the falcon. And Max and Duke in the sausage factory was very out of place, breaking the tension at one of the most climactic parts of the story. It felt like a strange "filler" (pun intended). (Also, vegetarians.) The voice acting is massively on point.

There's some really great throwback swinging flute and Big Band in the soundtrack, reminiscent of some classy animation work of the 50's and 60's--also serving to remind us that all of this is taking place in the uber-cosmopolitan Big Apple, accompanied by the fact that the animals have New York accents.  The sights of NYC are not tiredly and routinely exploited: Times Square! Rockefeller Center! etc. Instead, we have a wonderful scene of all God's critters in a New York taxi, treks through construction sites and an organically integrated Brooklyn Bridge. That's how to use location in a film.

All in all, this is a strong little film that could even bear (pun intended) repeated viewings. I could also have seen "The Secret Life of Pets" work as a cartoon musical.

"The Secret Life of Pets" will get you wondering what your innocent little beasties are up to when you're not around. You may even want to hire a Pet Detective...oh wait...that's another movie....

--Leonard alone sold me on the whole movie.

--Here's a YouTube someone made, looping Leonard headbanging to System of a Down. You're welcome.

--The Minions' short film before "Pets" is a super fun adventure as well.