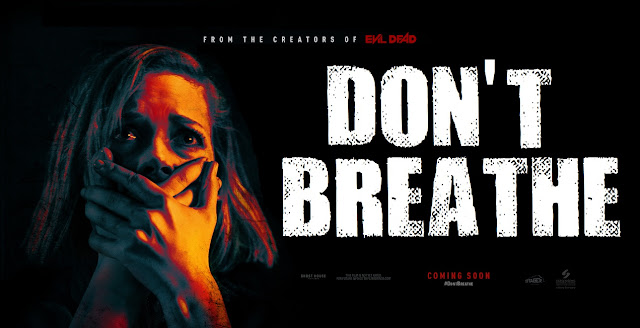 DO NOT WATCH THE TRAILER! GIVES TOO MUCH AWAY!

"Don't Breathe" is a much ballyhooed suspense-thriller from 38-year-old Uruguayan horror-meister, Fede Alvarez, that I was very eager to see. I don't do straight-up horror/slasher films, but I could tell that "Don't Breathe" had more of the air of a thriller, and I wasn't wrong. It's certainly a great little film, but not anything new or game-changing. I was only disappointed because of all the hype. It's engaging but not riveting. Curiously, the film begins with a chilling and intriguing scene of an older man dragging the body of a young blonde woman down the middle of suburban street in broad daylight. Why is the movie giving all this away? How is it possible that the neighbors wouldn't notice? Just you wait.

Set in a depressed Detroit (a delicious setting that serves the film well and is almost a character itself), three young people have become experts at breaking and entering. They take only high-end goods, clothes and jewelry, never cash. What's their secret? The fresh-faced Alex (Dylan Minnette) has a Dad that works for a security company. Alex has access to keys, passwords and remotes that turn alarms off and on. He seems to be the most well-off and middle-class of the squad. So why is he living a life of crime? Could it be that he's sweet on "Rocky" (Jane Levy) the hard-luck blonde whose mother is a true bottom-feeding, white trash trainwreck (a fact that is brought out deftly in just one scene of Rocky's home life)? The ringleader is a manically grinning, streetwise "Money" (Daniel Zovatto) who is also Rocky's boyfriend. There are subtle layers of tension and circles of conflict. Alex is the one who knows the extent of the illegalities of each of their potential actions, and constantly reminds them in the moment. Alex is the film's kind of naive anti-conscience.

The trio plan their last heist. They target a blind veteran (Stephen Lang) who lives alone, but somewhere in his run-down house is cash from a large settlement he got when his young daughter was run over by a car. Rocky urges them to forego their "no cash" rule so that she can make good on her plan and promise to her little sister to flee their miserable life and go to California. So we have an underdog city, at least two underdog ruffians, and an underdog, disabled soldier (the thieves overcome their hesitation about robbing him by saying: "He's probably not a saint"). Marvelous storytelling stakes.

When I read the synopsis of "Don't Breathe" before watching the movie, it seemed it might be a bit of a revenge fantasy, a bit of a "teach 'em a lesson" morality play, but it's actually quite relativistic and amoral. Each character is their own judge and jury. They will decide what's right, where the boundaries are, what justifies what and who will be punished and how. (It made me thank God that God is mercy!) And yes--there's even some God talk. I won't do a spoiler, but a character is made to say a variation on Dostoevsky's famous:  “If God did not exist, everything would be permitted."

The blind veteran character was not a total bogeyman. He wasn't all-knowing and didn't have the house booby-trapped as I had suspected. He seemed somewhat vulnerable, even as his senses of hearing and smell and military training overrode his blindness, to the point that he could trap three young people in his house and hunt them down. He has a gun and knows how to kill with his bare hands. The playing field is further evened when the blind man douses the lights. The filmmakers then use a wonderful kind of grayscale lens or some other technology so that we can actually see the action (unlike so much "dark digital" TV and film where we are truly in the dark and can't see a darn thing). Our young anti-heroes even advance toward their hunter--as blind as he is.

The tale is told with just a handful of characters; hint: more than four. That's all I'm going to say.
"Don't Breathe" is being called a horror film, but there's really very little horror or gore. There are, however, enough twists in what seems like a straightforward story, and a very unexpected ending. So many times the film seems to end, our burglars seem safe, they seem like they're going to escape--but of course, they don't. I was never utterly terrified or jumping in my seat, but we must, must, must know how this ends.

"Don't Breathe" is an 88-minute, solid thriller that left me wanting more. The uneasy, unresolved ending leaves room for a sequel. Because horror-suspense films shouldn't have happy endings now, should they?