The Oscar-nominated sci-fi film "Arrival" is a vacuous, insipid waste of time, in my humble opinion. I can't stand alien movies, but everyone assured me this wasn't an alien movie, or not your typical alien movie. (It is.) "E.T." and "Close Encounters of the Third Kind" are so much better than "Arrival," even though they may not totally stand the test of time. Speaking of time, the theme of "Arrival" is majorly about time. But in a really bad, stupid, fictional way that doesn't translate into anything in science, physics or reality that might be even slightly helpful and useful to us human beings. "Inception" is a much better exercise of the moral imagination on the subject of time and a better use of your time.

NOTHING TO SEE HERE, FOLKS

I forced myself to watch this film on the recommendation of a theology-savvy, pop-culture-maven priest friend who absolutely loves "Arrival" and is (incredibly) mining its "depths" and finding gold there. I wonder if he has heard of "fool's gold." I began watching this slow-moving, boring movie with a grating, irritating, looping "other worldly" soundtrack--waiting for it to get good. But that never happened. Amy Adams does her earnest best to play a language expert who is called on by the U.S. government/military to decipher the aliens' language. Jeremy Renner might as well not have had a part at all (except for the weak, confusing ending). He is less ornamental than space debris. I like both of these actors very much and felt sad and embarrassed for them. "Arrival" was beneath their skill sets. This film could have used unknowns.

My movie reviewing skills were also squandered on this film, and I took fewer notes on this film than any film in recent memory because there was nothing to write about. The story unimaginatively commences like a sequence from a low-budget TV show: We find out what's happening through various news broadcasts: scenes of hysteria, panic and states of emergency. Twelve huge pods suddenly appear on earth, hovering in disparate locations around the world (Montana, USA--where we spend most of our time, Russia, Pakistan, China, Sudan, Greenland). No one knows what these vessels are, what they mean, why these locations were chosen.

The military of each country is, of course, assessing the threat level, veering toward extreme caution, suspicion, taking no chances and assuming hostility. Communications with the beings in the pod are difficult because they use a very unusual form of language (both sounds and script). Do they come in peace? Do they come with a message? Are they offering technology? Do they know something we don't know? How much time are they giving us before they attack? Are we angering them by our miscommunication? Are we misunderstanding them completely? Oh, and the "aliens" are laughable and ridiculous looking. Sorry.

There is a thin, thin A story and no B or C story, except for continuous flashbacks involving Amy Adam's character's daughter, whom she lost to cancer. The love story is Disney princess overly romanticized. The grandiose idea/choice of war vs. peace is simplistically trotted out and simplistically dealt with. The U.S. military are stereotypically impatient, trigger-happy and ready to declare war, putting a time lock on the language-scientists to accurately decipher the aliens' intentions. But nothing feels urgent because the story, acting, tropes and visuals are so trite and tired and unengaging--and we've seen it all before on the small screen. There is nothing fresh and new here. There is abundant use of voiceover (a big no-no at my film school, UCLA), but it comes across (in Amy Adams' ethereal voice) as desperately trying to be profound and spiritual and contemplative and say something IMPORTANT. It fulfilled none of these objectives for me. I did not feel one iota reflective watching this film--many of the sentiments expressed fell on my ears like a sappy greeting card: "Don't take anything for granted." "Every day is a gift." "I embrace the journey now, every minute of it" [but it's a non-linear journey, folks, see the rest of this review]. And the ending--which plays with time--kinda sorta angered me, not because it was some impossible twist or disjointed from the rest of the film, but because it trashes reality while wanting us to believe this trashing is an actual possibility that can help us in some way examine on our own experience.

So here's what got me totally irked. What was presented, in the end, was a totally non-Judaeo-Christian worldview. Which is fine, because there are other worldviews out there! However, I guess what really irks me is not just a poorly-made film with a strong non-Judaeo-Christian worldview, but that Jews and Christians do not even realize how "alien" films like these are to their worldview. They embrace these films as though they contain some amazing meta-wisdom for us when they do not. (Not that we can't learn some truth, beauty and goodness contained in other worldviews, but overall? Nope.)

In "Arrival," Amy Adams' character (who has "secret knowledge" because she has "been here before," and "lived this already") clearly states: "I don't know if I believe in beginnings and endings anymore." This is a classic pagan* worldview: matter is eternal, everything just repeats itself over and over again in a never-ending cyclical pattern. Reincarnation. Time and history are non-linear. This is not the Judaeo-Christian understanding at all, and also not what cosmology and the Big Bang Theory tell us. Time, history, salvation history and each of our lives are linear. There is a beginning and an end to the story of Creation, of the world, and each of our precious life-stories. Jesus Christ is the Alpha and the Omega.
_______
*pagan--not a derogatory term--means literally "from the countryside," those who do not follow one of the Abrahamic religions: Judaism, Christianity, Islam 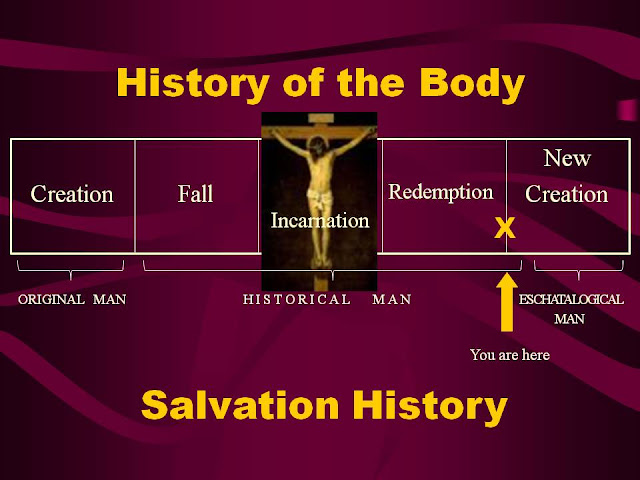 --Some who love this film are telling me that the Amy Adams character is able to "see as God sees." I presume they mean that she has been given the "grace" to be able look backwards over her life, or lead her life in reverse, or know in advance why certain things happen or something like that. Um, no one gets that "grace." Is that even a grace? Isn't that what people go to fortune tellers for and why it's forbidden? No one sees life exactly as God sees it or understands the totality of the tapestry, and if we did, there would be no purpose for faith or hope. I would think this would be more of a curse, especially because we have free will and this "time travel" would allow us to alter the future, etc., etc. There's a reason there are no crystal balls.

Also, folks are saying "Arrival" is so pro-life. I have no idea what they're talking about. "The Girl on the Train" is pro-life. Yes--I thought that film was going to be as bludgeoningly bad as "Gone Girl," but it's actually not bad. (My "micro-review" coming soon.)

FURTHERMORE: God is not even intimated. There are just aliens--who, although butt-ugly--are more peaceful and better at time-twisting or understanding the "true nature of time" than we are or something like that because they're "highly evolved" beings that don't have to care what they look like. Rubbish. I guess I'm just fed up with God being left out. But I shouldn't let myself be fed up (even though "The Young Pope" spoiled me with the amazing overt God-talk and God as a character), because, as Charles Williams once said: "Shakespeare expressed supernatural values in natural forms," as does any good art.

If you struggle with issues of "free will" and "is man truly free"? Read David Foster Wallace's defense of free will vis-a-vis determinism and fatalism: https://cup.columbia.edu/book/fate-time-and-language/9780231151573

--I'm just re-reading my sparse notes from the film. I spy "hokey," "cheesy," "ham-handed," and "schmaltzy" scribbled in the margins.

--I think I read once that the physical form that aliens take in sci-fi movies is irrelevant. They're even made to be uninteresting because we're supposed to focus on something else. But still.

--Those circles drove me NUTS. I kept waiting for a different shape, a squiggle, anything!

--One interesting language theory is put forth.

--Supposedly a big revelation: "There are different ways to interpret that statement [from the aliens]." (DUH.)

--I was left with HUGE plot questions that I can't put here without totally spoiling this "film."

--Some say our obsession with aliens and alien movies is an attempt to make sense of the mystery in our own lives. Some say it's an attempt to deal with our worst fears of invasion and aggression and all-out war and annihilation. Others say it's an escape from God: the "I'll believe in anything but God" stance. I haven't quite figured it out yet. (And maybe all these explanations are true.)