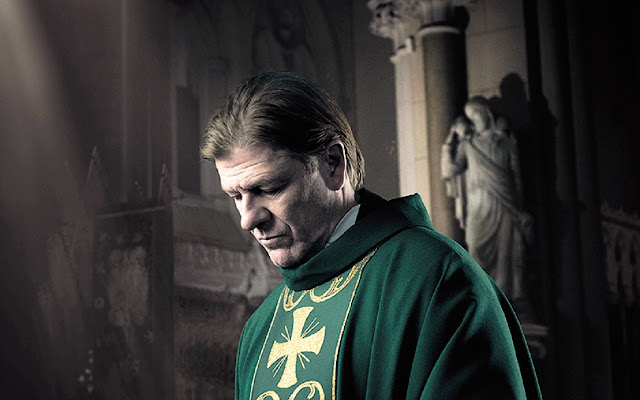 The British Netflix mini-series starring Sean Bean as a Catholic priest is an interesting (and flawed) take on modern sacerdotal life. Fr. Michael Kerrigan leads a rather grim and joyless existence as the pastor of a gorgeous gothic structure with very few congregants. He's intimately involved in his parishioners' lives and knows them well. He's well-rounded in that he enjoys some bowling and pub-time with friends here and there, but is ever-ready for the emergencies (spiritual and otherwise) of his flock.

THE DAILY LIFE OF A PRIEST

Many contemporary realities are presented: immigration, "hate crimes," single parenting, clergy sex abuse, mental illness, suicide, and we follow certain characters through all five episodes. Is there an "agenda" here? Sort of. The screenwriter is baby boomer Jimmy McGovern from Liverpool, so some issues are presented through that hackneyed narrative of "Why can't Catholics just get with it and follow whatever the culture is doing?"

First, what's good about "Broken": the fact that people care about the daily life of a priest! "Broken" has many similarities to the film (not the book) "Diary of a City Priest," a lovely little depiction of a priest in a dying parish in the inner city who leads an unsensational, uneventful life, and wonders if he's doing any good. The answer is yes: A lot of good for both the upwardly mobile and the down and out in his little corner of the world, one needy person at a time.

"Broken" also shows Fr. Michael going to a priest friend (approximately his same age) to talk over personal and pastoral matters. As he's faced with tricky conscience conundrums, he doesn't take them lightly, but is intent on doing the right thing, not the easy thing. (I would have liked to have seen him in prayer more often, however.) Being that Sean Bean is such a looker, I thought they would have the usual  "Thornbirds" Priestly Sexual Temptations. But, no. Fr. Michael seems to have a good grasp on his celibate vocation. "Broken" is also not "Nothing Sacred" (a short-lived American take on a priest having every kind of crisis imaginable simultaneously: existence, faith, Church teaching, etc.).

SPOILER: The fact that Fr. Michael was fondled by a priest-teacher when he was young haunts him, and he eventually confronts this hideous man (he's truly hideous) with so much intensity (but without laying a hand on him), that we are able to get a glimpse of what sexual abuse does to children. The even greater psychological abuse was from his own mother, and we see frequent flashbacks of this. We wonder how both of these harrowing realities of his young life affected his sense of his calling, but to the credit of the filmmakers, there seems to be a bit of a separation there--not just a fatalistic: he was driven to it by circumstances.

At other times, characters have strange, unemotional reactions to traumas that would simply break Americans. But I think what we're seeing is the Brit's "stiff upper lip" thing in all its glorious inaction. It never fails to startle me. :)

GRINNING AND BEARING IT

What's not so great about "Broken"? Sadly, Fr. Michael thinks that the reason there's no female priesthood is because men afraid of women's sexuality. Sigh. He also seems a bit cowed by "well, this is the way we do things now" (e.g., only offering Confession face to face)--regardless of options and how he thinks things should be done and him taking charge. Often, when Fr. Michael states Catholic teaching, it's clinical and without understanding it, owning it or embracing it, like some unfathomable dictate of the universe. There's a kind of guy's approach to it all (with maybe a touch of reverence, but maybe not): "These are the rules. Rules are good. They don't have to make sense." BUT, we know that:

"God has given us the wisdom
to understand fully the mystery
the plan he was pleased to reveal in Christ." --Ephesians 1:8-9

Fr. Michael even admits to his clerical buddy that he thinks the Church's teaching on sex is a crock.

IN BAD NEED OF THEOLOGY OF THE BODY

Everyone in "Broken" is in need of a bracing and liberating dose of Theology of the Body.

The story regarding an older "gay" man who is rebuffed badly by a Catholic Trinidadian father (and told by said father to stay away from his two young sons who were taunting him) is a mixed bag. It's a complex story that involves a rigid understanding and uncharitable application of Catholic teaching (the Trinidadian), as well as excessive "hate crime" legislation. There is also a confusion of "homosexual orientation" with "homosexual acts." Arrrrgggghhhh. But there is a truly nuanced ongoing conversation in this episode about what it's like to experience life as "a gay man," to grow up "being gay," and to be bullied for it (this bullying does not necessarily cease in adulthood).
No Church teaching on any issues is ever explained in "Broken." (But have you ever seen that in any secular TV/film story?) That's the rub. Even the adamant Trinidadian father, who is willing to go to prison for his beliefs, can't explain why certain sexual behaviors are wrong (cleverly, the "gay" man in question is celibate).

In the end, I believe that the creators of "Broken" would really, really, really like to hear the Church's teachings intelligently, coherently and life-givingly explicated. Just once. Call me.

--An excellent commentary on one reason men treat women badly (use women sexually). Before becoming a priest, Michael's self-esteem was so low (in his case, due to constant berating by his mother) that he believed if a woman would sleep with him, she had to be lower than low, and therefore he would treat her like dirt. (Another way of saying also in general: women demonstrate to men what value they have by the value they place on themselves.) Needless to say, good Fr. Michael deeply regrets his actions.

--A very glamorous suicide (even moreso than "13 Reasons Why").

--"Broken" is not a wholesale lashing out at or demonizing of the Church like the newer episodes of  "Midsomer Murders." (I had to stop watching MM because it was so vicious and ludicrous). It feels like an admission that Catholic priests and the Catholic Church are still very vital and important, but are needlessly puzzling. All that's needed is "change."