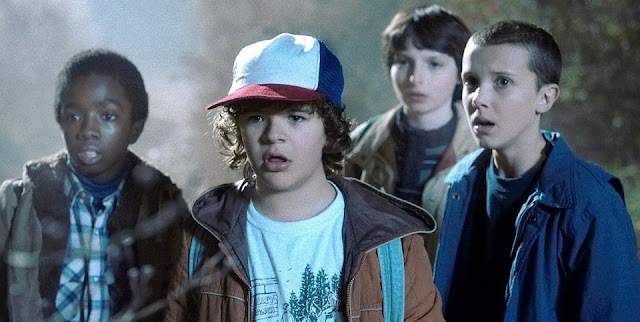 Season 1 -- Here's a series for (almost) the whole family. Pre-teens could definitely handle it. Old fashioned, skin-tingling, mysterious fun, reminiscent of 1980's filmmaking, it's also set in the 1980's. "Stranger Things" isn't perfect, but it's got a lot of good stuff. Four do-or-die friends (pre-teen boys) in the town of Hawkins, Indiana, play a game of Dungeons and Dragons (uh-oh, problematic in itself) that comes to life, or rather serendipitously coincides with a top-secret government experiment going on in their neighborhood. It's a bit of sci-fi meets supernatural thriller meets buddy movie meets John Hughes. "Eleven" is young girl who's been raised as an experiment in the government lab in the little town--an experiment that gives her superpowers.

The kids are the real stars of the show, of course. Solid child actors who must be having barrels of fun.

The series starts off with a lot of bad language, taking the name of the Lord in vain: "Jesus!"--especially awful when kids say it. (You can teach your kids to respond aloud: "May He always be praised!" whenever they hear the name of the Lord taken in vain anywhere: in media or real life, and/or simply make a Sign of the Cross), a teen sexual encounter (that goes awry), massively dysfunctional family dynamics (except for the fierce motherlove of Joyce, played by an Emmy-deserving Winona Ryder) including one useless and one abandoning father (but there are other good male role models). The grizzly bear of a town sheriff is a dissolute ex-boyfriend of Joyce, but for all his gruffness, he is fearless and will do whatever it takes to help and save his townspeople. Sean Astin plays Joyce's new flame, a braniac and a good all-around chump.

So why am I recommending this? There are amazing portrayals of keeping promises, friendship, sacrifice, and in the end, all kinds of people stepping up the plate to love and do the right thing. The adults work together, the teens work together and the kids work together--and then all ages groups work together together. Families are reunited.

As always, family viewing and discussions with your kids about the media they watch will be in order here.

Season 2 -- A LOT more PROFANITY and more COLORFUL profanity on the lips of everyone (including even more taking of the name of the Lord in vain) by young and old. Lots of SCREAMING at and MANHANDLING of children. Some VERY INTENSE scenes and lots of VIOLENCE. One teen sexual encounter and teen drinking facilitated by an adult set in a happy-go-lucky light. "Stranger Things" went from PG to PG-13 in the second season. Why Oh Why???

Hokey sets and futuristic machines (a la the original "Star Trek") keep up the campy feel. A new red-headed girl is allowed to sort of join the squad. The only reason they like her is because she's like a boy (pinball wizard and likes to skateboard). Although that's typical of the boys' age, it still sends a message to the girls watching that the only way to be validated in this world is to be like a boy/man. No, be BETTER than boys/men at boys/men stuff. Ignore and eschew any typically female stuff. Oh, and probably be good at STEM. "Eleven" ("El") also is very "tomboyish."

One of the boys gets sad "girl advice" from an older teen: basically to never fall in love with girls (just enjoy them) because they'll break your heart. (Oh, and pretend you don't care and aren't interested and they'll come flocking.) Some of this gets corrected and resolved in a good way by the ending.

The "Upside Down" (not to be confused with Australia) is interesting. It's this creepy dark, blue-lit place where large white flakes float in the air in slow-motion. To enlarge the concept: it's almost like Purgatory or somewhere where no one ever really dies, they're just suspended, waiting for rescue--but on the concrete level, it's also just part of the government experiment.


"Eleven" is desperate to find her "Mama" and "Papa." The deep ties of family are all over ST.

One of the boys undergoes a truly harrowing kind of possession by the "Shadow Monster"--a self-replicating mutant that's taking over the town of Hawkins from tunnels below.

"Eleven" discovers her name is really Jane and is enlisted to revenge-kill (with her special powers, summoning up her anger) "the bad men"--the government agents who raised her and experimented on her and others. Revenge is offered as "healing." She goes full-on hoodlum vigilante...with a good, redeeming twist.

"Stranger Things" could have been a scary thriller, "dark" and "realistic," but still kid friendly--but it's really not. It constantly goes just a little too far every time (definitely in Season 2). Perhaps it's a reflection of the coarsening of society in general.

If a family chooses to watch "Stranger Things" together (I would suggest not allowing kids under 12 to watch), it will require a good Theology of the Body and Media Literacy conversation.

In the end, darkness is dispelled, but an opening is left for ST3.