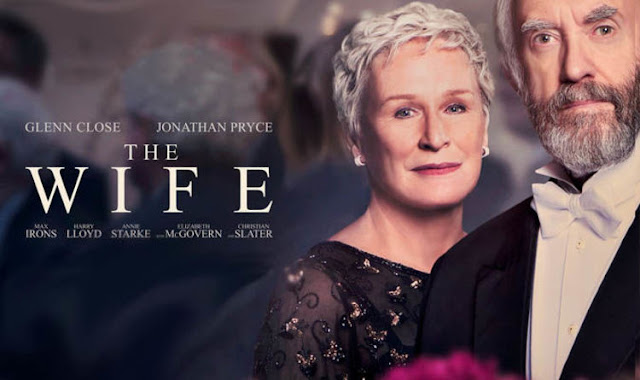 In case you're thinking--as I was--that you pretty much know what the film "The Wife" is all about? You kind of do and kind of don't. If you think it's about a woman who has devoted her whole life to her husband while she stays in the background and then has regrets, you're half right. Glenn Close is absolute perfection in the role of an older woman whose husband has just been awarded the Nobel Prize for Literature. Jonathan Pryce is sterling in all his irresponsible despicableness. The opening scene is the white-haired couple canoodling in bed, so you know their relationship is strong and sweet. So why the strange look on the wife's face when she listens in on the phone call announcing the prestigious award?

The second wrinkle in the blissful afterglow of the jubilant news is the adult son, himself an aspiring writer, being patronized and rebuffed by the father he idolizes. In fact, it doesn't take long for us to realize that this Nobel awardee is a bit self-involved, rude and self-indulgent. His wife strives--sometimes in vain--to keep him cordial, healthy and on time.

But hubby seems to truly adore wifey. He introduces her to all the bigwigs, credits her constantly and sincerely with being the love of his life, his muse. He evens says he is nothing without her. So what's the problem? What is the discontent between them?

This lean, tight drama that unfolds like a Harold Pinter play, could easily have been a play, but fits smoothly on screen. There are untold amounts of foreshadowing everywhere, and the acting is so believable that we are almost convinced we're watching a documentary of the pair in Stockholm--getting ready for the biggest day of a deserving, brilliant writer's life.

Flashbacks tell us how the relationship began: he the writing professor, she the enthralled student. What secrets they have built up together over the years gradually emerge. The exposition is incremental and masterful. The relationship is steady as a stone and as volatile as a volcano. Who will win? Who will lose? Whose love is real, whose is not? In some ways "The Wife" reminded me of "Phantom Thread," where the logic of unspoken husband-wife agreements from another era seems inscrutable to us. But as my mother once told me in no uncertain terms when I was dishing out advice on her marriage (to my Dad): "You can judge us as parents, but not as a couple. You have no idea and no understanding about what has gone on between us."

--The young wife is played by Glenn Close's real-life daughter!