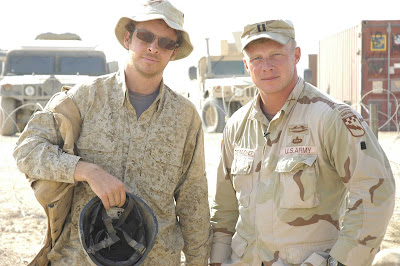 Wikipedia defines a documentary as an attempt to visually express and document reality. "The Complete Film Dictionary" defines it as a film that deals directly with fact and not fiction, that tries to convey reality as it is, instead of some fictional version of reality. "Brothers at War" comes as close to this definition as any documentary I've seen. (Wikipedia admits that "documentaries" are continually evolving with no clear boundaries, but if we are thinking "traditional" documentary, "Brothers" is it.)

At first, I wasn't able to put aside the immorality and illegality of the U.S.-led invasion of Iraq, but filmmaker Jake Rademacher "disarmed" me, because "Brothers" is more about family than it is about war, or rather, a story of war that is woven into a story of family. This is simply NOT a political film.

Jake is the oldest of five brothers and two sisters from a close-knit DeKalb, IL, family. He had planned to join the Army like his brothers Isaac and Joe, but bad eyesight made it impossible. He got into acting instead. "Brothers" is, in part, Jake's quest to see "what might have been" in his own life as he goes to Iraq to film Isaac, Joe and their fellow soldiers in action. He is also interested in winning his brothers' respect and wants to show the rest of his family (and the world) what his brothers are doing "over there." Jake's narration is humble and insightful with an open, straightforward Midwestern sensibility. He inserts himself into the story sparingly. "Brothers" is almost about the war tangentially, or only insofar as it matters to his brothers, which of course it does. It seems to matter to Jake only secondarily.

Nothing truly sensational transpires beyond the tedium and danger of a long war made of up IED and sniper attacks, surveillance, community PR, and a matter-of-fact death or two (some sanitized, some not). The pacing and editing are consistently engaging. Flashbacks to the Rademacher boys as kids is wonderful. They have continued their tactile playfighting, jokes, and hugs into adulthood. Jake tells his family's story in a non-dramatic, unemotional way. I've never been so touched without crying. This is a war documentary made by a sensitive guy. He is determined that he and his brothers are not going to "grow apart" emotionally, and he'll do whatever it takes—even follow them to Iraq—to make sure that doesn't happen. Jake's quiet strength and other-giftedness (the arts) are his gift to his family that they will treasure now for generations.

There is just so much love in this family, so much other-centeredness and thinking about and looking out for each other. I wonder if they realize that this is their true greatness? Do they know how LUCKY they are? The whole family, including parents, have their say, but it's the brothers who are the focus. How Rademacher made this film so objectively and yet so intimately about his own family with their full cooperation is truly amazing. If the Rademachers had been any less remarkable, this film would not have been possible.

Jake gets nicknamed "Hollywood" by the troops, and he looks truly out of place in Iraq. Jake admits he's "soft," but he doesn't care. As the oldest, he seems to hover protectively over his family, even describing helping out with his siblings when he was growing up as "parenting." What better way to hover than with a camera? Jake is the nostalgic one of the family. He seems to want to draw them all around him forever: "If we know our brothers better, maybe they'll never be gone from us." The fear of Isaac or Joe getting killed is always lurking, especially after having lost one of his five brothers, Thaddeus, when Thad was age 20 (not war-related).

Isaac comments that Jake embedding with troops on a five-day mission will help him find what he's looking for, the heart of the American soldier, and it is then that we catch soldiers jawing about the usual: girlfriends and wives; why are they doing this, anyway?; their love of America and freedom; and one young man sums up: "It's confusing: I'm home for a year, away for a year, home for a year. I love the adrenaline rush of kicking doors down, but I love my family, too." The love extends to the Iraqi people and their struggle. One wisecracking New Yorker is assigned to train Iraqi forces, and for all his impatience with them, he really cares. The camera captures a certain simplicity and child-like innocence in these neophytes, and even our Yankee tough guys are a bit gentled by their genuine, unmasked humanity. The Americans seem to be actors, cowboys, philosophers, and well-trained/well-disciplined warriors, while the Iraqis seem to have more spontaneous reactions of fear, joy and pride. The contrast is often comical.

There is something wholesome about this documentary. U.S. snipers eat M & M's as they do their job, and it doesn't feel the least bit wrong or surreal. Either Jake just sees these episodes as the banality of wartime duty, or he's a masterful propagandist, getting us to swallow anything. I think it's the former. I've read and watched other accounts of both Iraq Wars from very different, darker perspectives, but that doesn't make Jake's perspective any less real or true. For the most part, Jake shows us what is truly good in the "American spirit," in our American military, in his brothers. What's true and real is the love at the core of his family, and each military "band of brothers." A love "stronger than death." And a love story in wartime trumps all other stories. Or so we were taught at UCLA. There is another kind of "brother" and family here as well, that is, the brothers in arms—that camaraderie that we women just don't have. These guys worry more about each other getting killed than themselves. They know they will be friends for life. They know that nobody but these "few," these "happy few" understand.

One young soldier say: "I would give my life for America any day. I wouldn't think twice." And he means it, and he knows exactly what that means now, and he just might have the chance. Most amazing of all, and I have heard this since the beginning of the Iraq Wars from those serving in the military: they don't seem to care whether people back home understand or appreciate what they're doing. What matters is that they know why they're doing what they're doing. So that people may live free. So that people may be free to criticize the military or kill themselves eating too many hotdogs. One soldier even says: "There must be chaos so that others may live in peace." There is honest talk of the less altruistic motivations: military are higher caliber people to be around, make Dad proud, I didn't want to get stuck in my little town, etc. In the end, most soldiers agree it's all about family. They do what they do for family, even for the baby girl who may not remember who you are when you return.

THEOLOGY OF THE BODY--This is textbook men's spirituality, from their own lips. My problem with war is that first of all, it is blowing up other human images/temples of God (that we drone on and on about in religion). How dare you? Who gave you the right? And second, I think war takes that natural, good impulse of men to guard, protect and defend their families, and then actually takes them AWAY from their families, and they begin to be almost permanently directed away from their families OR are so damaged when they return to their families that they no longer know how to or are incapable of being directed toward them. In short, war is a big lie, whispered in men's ears century after century.

Email ThisBlogThis!Share to TwitterShare to FacebookShare to Pinterest
Labels: brothers at war