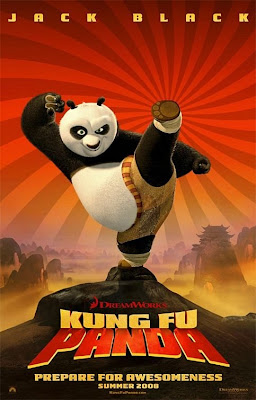 "There is no charge for awesomeness. Or attractiveness." Jack Black does awesome and attractive voicing of this loveable, out of shape, noodilicious bear. There I was, thoroughly enjoying all the martial antics and Asian flavor of the movie when--Hi-YAH! (big, furry, black-and-white, rolly-polly spoiler alert)--the long-awaited contents of the practically sacred Dragon Scroll were revealed and they were...EMPTY! "There's nothing." Yes, folks, everything behind everything in this movie is nothing. As I look back at it, perhaps it was a Zen joke, but, as Randy Newman sings in the "Monk" theme song: "I could be wrong now, but I don't think so."
AFTER seeing nothing in the scroll, the Kung Fu Panda (who is the messiah-figure Dragon Warrior) sees himself. It's important that it happened in that order. A big deal is made of the fact that there is NOTHING. Then it reverts back to the Panda to reach down inside of himself and find his own strength and courage and whatnot. So, why did the Panda win out over the much more powerful Tiger-dude (who also saw the empty Dragon Scroll and believed mightily in himself)? This is not explained. There is a Kantian (unfounded) assumption here that goodness is somehow preferable. (The good-hearted Panda.) That goodness wins. That people want to be good. But if nothing's where it's at, why be good? However, I had a revelation of SOMETHING. Earlier in the movie the cute old tortoise wisdom-figure keeps saying: "Believe! Believe!" This staple catchphrase of Hollywood feel-good movies has long irked me. Everyone from Tinkerbell to Polar Express to Elf to Prince of Egypt* uses it. Just what the hey are we believing in??? And if "KFP" is speaking for the rest of the tinseltown fare, it IS nothing! Pretty nihilism. The whole discipline of Kung Fu and the master-student is empty. We ARE alone in the universe. Nothing is "special." "It's only special if you say it is, treat it like it is" (KFP's Dad). Nothing has intrinsic value and meaning, only the value and meaning we give it. Oh dear, oh dear.
Please hear me out. I am NOT one of those watchdogs who see subversive images and messages in every Disney animated flick. But a constant repetition of this message, or rather non-message, this omission of God, the natural law and the integrity of each thing that presents itself to us, does go into little minds. If God is so great, why can't we talk about Him? At least hint at Him? I'll never forget the kid in my mother's third grade CCD class: "If Jesus is so great, how come he's not in my history book?"

There's something very deliberate in the faithlessness of "KFP" (lack of faith in ANYTHING). Perhaps the "law of attraction" and "positive thinking" was at work here, and maybe my ignorance of the mindset required in the martial arts is coloring my understanding of "KFP" (e.g., maybe if you THINK you can break a stack of 2 x 4's with your noggin, you can). Or perhaps it's the "nothingness" of Buddhism that's suddenly being presented to KFP and his companions (who didn't seem to be aware of it before). I could be wrong now, but I don't think so.

God is not really a character in "Prince of Egypt." It's more of a nationalistic movie.