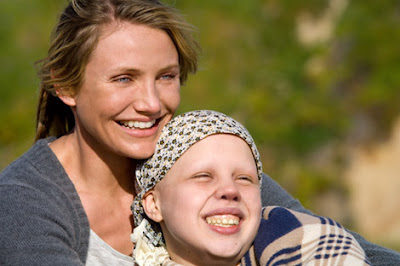 "My Sister's Keeper," much-loved novelist Jodi Picoult's first book-into-movie, is about death and familial love. It looks death straight in the eye and comes up blank. As it should. The film's conclusion is that we don't know much about death or the afterlife, but we do know about love.

I was immediately grabbed by the book's premise when it came out, meant to read it, and never did: A very determined mother is impregnated with a daughter who is specifically designed by medical science to be compatible "spare parts" for her sick older daughter (leukemia). At eleven years old, the younger daughter sues for control over her own body. Sound like creepy sci-fi? It's not at all portrayed that way. As these technologies become commonplace (think: Sarah Jessica Parker and Matthew Broderick's twins, recently carried and birthed by a surrogate mother; Octomom; the widespread use of IVF; sperm and egg "donation"; frozen embryos; etc.), emotional, home-y narratives will accompany these decisions/choices/actions, and thus, these stories will become just "normal."

As is well known, the Catholic Church sees the above-mentioned "solutions" as disrespectful of human dignity. Anything that treats human beings as objects, things, products, tools, "rights," possessions, etc., is not in keeping with that dignity. (Certain technologies to aid fertility ARE approved, as long as it's within the context of the nuptial act, aiding the natural process. Contrary to popular belief, the Church wants you to have sex, and is very back-to-nature, crunchy granola.)

"My Sister's Keeper" is really a bio-ethical drama, but I've never heard anyone put it in that context which is kind of scary in itself. It's also a legal drama—what are the little girl's rights, if any? While watching the film, one is acutely aware that this is simply the state of the question/problem FOR NOW. Things are only going to get weirder.

Lots of great ponder-this statements and questions surrounding the issue are posed by characters:

"We went against nature. It's our fault. Anna's reaction was bound to happen. If we force her to give her kidney, will she look at us from now on as though we used her? Maybe we just wanted what we wanted."—Dad

"I was engineered." –Anna

"Who stands up for Anna?" –Lawyer

The action starts off with a bang—Anna's voice-over brings us up to speed in just a few minutes: how she came to exist and why, and then off she goes to the lawyer. But MSK is an uneven ensemble piece. In the beginning, we hear the thoughts of each character, but that stops abruptly and we switch to Anna's thoughts alone and we think she's the main character, but, no—suddenly it's Kate for a long stretch, including visual meditations of her illness and a budding romance with a fellow teen cancer patient. Perhaps this asymmetry is intentional—to defy expectations and remind us of the unevenness of life. And death. However, each family member, even the devoted, ditzy aunt, has their moment, gets their say by the end.

The conclusion-twist, although altogether a probability, clever, generous and heroic, felt like a bit of a cop-out (much like the miscarriage in abortion movie "Citizen Ruth"). Why NOT follow the real question through to the end? Actually, we know such cases have already happened (families having a child for the therapeutic purpose of healing another child). What ARE the rights of these too-young-to-speak-for-themselves-de-facto donors? Should this ever be done? (Starting from babyhood, Anna has been through many painful procedures with side effects that compromise and jeopardize her health.) Picoult sets her dilemma in the State of California, so she refers to CA law, and also federal law and precedents which I assume are real.

What side does Picoult come down? Hard to tell—if she's even taking sides. Is she trying to "accomplish something" through her literature? Picoult is a graduate of Princeton, does extensive research on her books, is the mother of three teens, and tends toward what is being called "child-peril lit." She does mention in a New York Times Magazine interview that she feels she is somewhat superstitious and hopes that by dragging these possible family disasters out into the light, maybe somehow they won't happen to her family.

This film is quite well done (director Nick Cassavetes, "The Notebook"), and only treads the edge, but never falls into the chasm of sentimentality. This is not to say that you won't be sniffling.

The actors are all outstanding and really mesh: Cameron Diaz (the control-freak, blinded-by-smotherlove Mom--we ALL know women like this, who have complete confidence that they alone know what's best for every member of their family), Jason Patric (the strong, often silent, makepeace fireman Dad), Anna (the strong-willed-as-her-mother fighter, who also loves her sister, literally "to pieces"), Evan Ellingson (the lost-in-the-shuffle middle child), Sofia Vassilieva (the dying-to-live but otherwise typical teen who bounces from highs to lows, from consoling her family to needing their consolation), Alec Baldwin (the slick personal injury lawyer doing one good thing in his life), and Joan Cusack (the judge, but why can't we have a Joan Cusack movie? A series of Joan Cusack movies? All Joan all the time? Why don't we see more of this consistent-bullseye, scrumptious actress with her thick as pea soup Chicago accent? OK, I'm done.)

MSK is like one of those really good "Lifetime" movies. There's not a lot of humor, but the overall tone of the movie is gentle, light, touching. The lack of laugh-out-loud-laughter feels right. Too many movies seem insecure by trying to make us laugh too hard, too often.

The everyone-talking-at-once, rollicking extended family dynamic feels unscripted. Watch the scene where Dad tries to take Kate (the sick older daughter) to the beach. Ugly to watch, but boy, is it true to life! (People clapped for the Dad in my theater.)

In the courtroom, Anna's lawyer comes close to asking: "Where does our 'culture of absolute choice' end?" We pretend it ends when my rights crash into yours, but that happens early on in many cases, and I'm afraid we've learned to deny, justify or just force our way.

--Abigail Breslin--forever our little Miss Sunshine!--is still totally natural and fluid and "her-age" and tripping the light fantastic. A pox upon Hollywood if they ever destroy her. Amen.

--Director Nick Cassavettes' daughter was born with a congenital heart condition, so he knows of what he directs.

--People in my theater were laughing at the wrong times, which made me wonder if they were just nervous because they would do the same thing to Anna if they had a Kate?

--When hip Mom (Cameron Diaz) calls the hospice lady "broad," and "sister," it felt like false notes—the words of a much older woman

--The "culture of absolute choice" and "doing what I want with my own body" comes back to butt-bite when the designated-designer-donor-daughter uses the same rhetoric!

--Just exactly was Jesse (the son) doing in Hollywood late at night?

--Wouldn't Anna's relationship with parents be MUCH more strained?

--There's no God in the movie. But there's lots of genuine sacrificial love.

Speaking of "The Insider":

"The word 'God' was not there but the Reality was; when someone lays down his life for another, God is present." 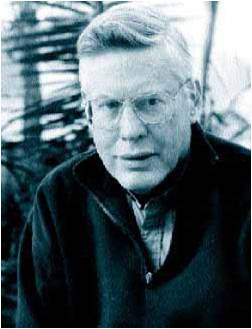