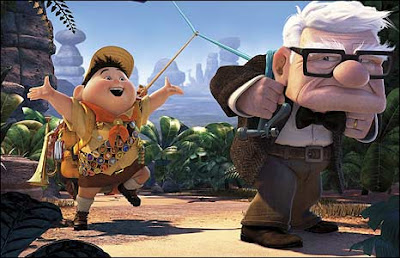 "Up," the new Disney/Pixar gem, takes the unusual tack of making a senior citizen the main character and hero. Kid-oriented films almost always have a kid as the protagonist. The kid in "Up" is the grumpy old man's sidekick, but becomes every bit as much a hero by the end. Carl (Ed Asner) and his beloved wife, Ellie, had always planned to go adventuring, but never did. Ellie dies, and Carl continues to talk to her regularly. The house they shared becomes the presence of Ellie for Carl, so when adventure calls, of course, the house must go with. A young adventurer, Russell (Jordan Nagai), inadvertently comes along for the ride (Carl's balloon-borne house sailing to Paradise Falls, South America), and Carl resents him until he discovers that Russell doesn't have the love of family that Carl once had. Two more companions join the unlikely duo: a gigantic, rainbow-colored, ostrich-like bird that is supposedly non-existent; and a friendly mutt with a collar that reads his simple, happy-go-lucky dog thoughts and interprets them out loud: "I have just met you, but I love you!" "Squirrel!" Everyone's mettle is tested by the hardships of the jungle and a dastardly plot to capture the bird (named "Kevin" by Russell). The animals are truly hilarious. Raucous laughter is in order. Sample: To the dogs, all humans are just different kinds of "mailmen," Carl is known as the "one who smells of prunes."

Everything is just right in "Up." The animation is uber-realistic, while at the same time being very much caricature-esque (balloon-y, block-y and button-y all at once). Due to the careful craftsmanship and artistry of the Pixar gang (director Peter Docter, Bob Peterson, Andrew Stanton, Brad Bird, etc.) the voice-acting is perfect, never sounding a false, disconnected-from-the-visual note as often seems to happen in other animated flicks (think: "Horton Hears a Who"). The narration is recorded first, so actors are basically sitting around a studio reading from a script, trying to imagine the action. The child performances are especially well done, with a big shout out to the young Ellie (who happens to be Elie Docter, the director's daughter), a half-toothless seven-year-old, who sounds like a youthful Granny from "The Beverly Hillbillies." (Incredible expression and dynamics. This young lady is going places.)

The Disney/Pixar ethic allows the artists at the helm to do their thing. Loving attention is paid to each detail. The filmmakers actually went to South America to sketch the flora and fauna and get ideas. The crew also play music, so they performed Tin Pan Alley gigs at old folks homes just so they could watch the mannerisms and movements of the residents. You'll be saying to yourself throughout the movie: "How do they think of these things??" Case in point: the sound that Russell's face makes as it slides across the windshield of the dirigible. At Disney/Pixar an old-time sensibility, the sense of wonder, remembering what it's like to be a kid, and the spirit of adventure are all alive and well.

Much has been made about the image of Carl dragging his house behind him, or rather, above him, held aloft by balloons, and tethered to earth by Carl's living in the past. It is not a burden for Carl, but a labor of love. It makes us instantly reflect: What am I carrying around that is ridiculously too old and large? The fact that Carl was able to remove the house at will by tying it to a tree for a rest, reminds us how easily we can let go what needs to be let go, if only we will.

Carl was a devoted husband, but seems to think that that's all life asks of him. His answer to everything else is: "That's none of my concern." As the saying goes: "Old dreams kill new ones." And sometimes we just can't have both. But Carl uses his ingenuity to incorporate the old into the new. He transforms his comfortable nest into a vessel of rescue for the living. And he knows Ellie would have approved.

--Russell is the fat-kid hero!

--Afraid of heights like me? You're palms will be totally sweaty since much of the action takes place at 30,000 feet above sea level.

--Reminded me of the "island of misfits" from "Rudolph."

--There was a yellow house that looked JUST like Carl's house in downtown Toronto in the 90's, surrounded by skyscrapers, holding out against development. It was uninhabited but you could still see the old lace curtains in the windows. Would love to get a picture of it. It's gone now.

--Tons of production babies in the credits!

--Film dialogue/plot understatement of the year: "Assisting the Elderly" badge.

--A charming, waltzing, muted brass soundtrack peppered with way-south-of-the-border bold brass dance music. It's on my wishlist of movie soundtracks.

--Coming full circle for Pixar: didn't they start with a short of old guys playing chess??

Email ThisBlogThis!Share to TwitterShare to FacebookShare to Pinterest
Labels: "up", elie docter, pixar