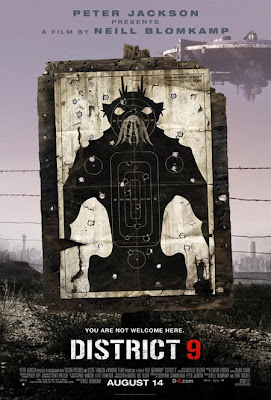 The sci-fi hit "District 9" is 30% social statement (a la Ray Bradbury) and 70% blast 'em to Hades violence and special effects.

An alien spaceship breaks down over Johannesburg, South Africa, and the government sequesters the aliens in a refugee camp that quickly turns into a restive slum. Signs—many which you and I saw on buses and billboards as a clever promotion for the film—are everywhere: "Humans only!" White South African writer-director Neill Blomkamp is, of course, holding a mirror up to apartheid. White and Black South Africans are now united against the new outsiders. The two-legged, erect, human-sized aliens that look like a hybrid of Star Wars' Storm Troopers and giant shrimp are pejoratively called "prawns."

The movie is filmed in a gritty, pulsing, hand-held cinema-verite style, much like "Cloverfield." It's hard to look away, and the acting is superb. Much of it is presented as a video news magazine/diary that makes it seem even realer. "D9" feels like a European film without the "auteur" arbitrariness, and like a Hollywood action film without the greatly overblown pyro-technics and soundtrack. But this is not a small film. It's big, just somehow a little closer to the bone and a little less sleek than an "American film," which, for me, is a welcome change. Small horrors, encroaching on our normal lives and growing, are far more terrifying than big, loud, "BE AFRAID, BE VERY AFRAID RIGHT NOW ON CUE!" Tinsel Town tropes. The CGI creatures (whose language is translated by subtitles) are completely, I mean completely, and seamlessly integrated into the live action as never before.

Wikus Van De Merwe (Sharlto Copley), a government operative, is in charge of re-settling aliens in a new camp. He likes his job way too much, and has prawns killed with impunity. (He has much more pause killing humans later on.) This almost-goofy overachiever transforms (in more ways than one) into a desperate fugitive in a matter of hours. The hunter becomes the hunted. The story-line is very imaginative, and the film world can toast a fresh talent in the not-yet-30-years-old Blomkamp (who has a background in visual effects)!

The ethos of "D9" can be summed up in Wikus's terse reply to an alien's son who is delighted by similarities to himself that he observes in Wikus: "We are NOT the same!!"

A thought-provoking subplot involving bio-tech, power-lust and armaments firmly embeds "D9's" subject matter in the sad realities of (often black market) international commerce. I thought to myself at one point: just change up the players and the goods a little bit and we've got reality happening somewhere in the world this very moment.

The action only lags at the suddenly slowed-down, drawn-out gun battle ending which tries to play up a few heart-warming plot-points that were thin to begin with. Also at the end, the terms, conditions and rules of the story are repeated too much. We get it. But these are minor flaws. The final resolution is rather unique and complete, albeit with a hint of mystery.

"D9" is rated "R" for "bloody violence and pervasive language." It's no more violent than today's general movie violence, but there's a lot of, well, carnage. Alien weapons vaporize/liquefy people like juicy tomatoes. And there's a lot of vomit. Oodles of vomit. If you don't like violence, gore and just plain groddiness (although I wouldn't deem it "gratuitous), "D9" is not for you. The considerable use of the F-bomb doesn't feel gratuitous either, given the circumstances. And uttered with an Afrikaner accent, it doesn't even sound like our harsh American usage, if there's such a distinction.

Nigerians come off looking very, very bad in this movie. This would never happen in a contemporary American-made film. There's a huge buzz online that "D9" is racist. It seems to be an intra-Africa thing as to how certain Africans look at other Africans. Seems to me this is the REAL "alien" story here! However, at one point, it was confusing, because when the Nigerians supposedly switched into their own language, they were speaking the Zulu "click" language. Forget "Inglorious Basterds": D9" seems to be some kind of revenge film when it comes to Nigerians. Just Google "Nigerians and District 9."

"D9," in the end, is pure entertainment. There's not a whole lot of heroism. Nobody really changes. The good stay good. The bad stay bad. In the main, everyone is just trying to survive.

And what does the ever-hovering spaceship signify? Home--always out of reach? And what is home? Where you're welcome?

--Is the slightly mysterious ending ripe for a sequel?

--You will not, I repeat, not be able to eat a Big Mac or any other meat for a while after watching D9. Trust me.

--The magic elixir that every protagonist in every movie is after is actually an elixir!