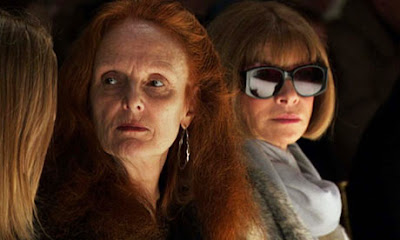 Ever since God made us clothes to cover our bodies, we've been obsessed with those coverings. But what is fashion? What is beauty? Anna Wintour, editor of "Vogue" magazine, and her longtime collaborator, Grace Coddington, seem to know.

In "The September Issue," a low-key PG-13 documentary (could've been PG)--an A & E indie film that feels like television--we not only get to follow Anna and Grace all over the world to fashion shows and fashion shoots, and observe their interaction with the world's top designers, we also get inside Anna and Grace's heads and eyes as they work on the September issue of Vogue (a phonebook sized mag). What's the big deal with the September issue? It's THE time of year when women see what's new and change things up in their wardrobe. And Anna Wintour will have a lot to do with making or breaking what's "in." She is considered the world's most powerful woman in couture.

If you read/saw and enjoyed "The Devil Wears Prada," a novel-into-film about Anna Wintour (played to the teeth by the incomparable Meryl Streep), penned by a young woman who used to work at Vogue, you'll want to meet the real Wintour. She's more an intensely-focused British businesswoman than the ice queen she's made out to be, although she doesn't readily suffer foolishness. It's fascinating to watch her work and carry herself with a sort of unquestioned absolute aesthetic moral authority. "Vogue" not only operates like a tightly run ship, but also like a religion. "High priestess," "pope," "church," and "infallible" are alternately used to describe Wintour's world and verdicts.

Grace Coddington, a former model from Wales, is a hands-on stylist and a warm complement to Anna's efficiency. If Anna is the soul of "Vogue," Grace is the heart. (Interestingly enough, the names "Anna" and "Grace" both mean "grace.") Despite the tremendous respect, admiration and trust in each other's ability, you'll probably want to get out of the way when they go toe to toe over their differing tastes. Both are women of incredible resolve who love what they do. So much of what they do is simply SEEING. Anna and Grace's eyes take us through "SI." Anna's fixate like a hunter's, Grace's constantly dart around, gathering and creating.

This documentary is getting high marks from all corners, and for fans of "Project Runway," and "The Rachel ["I die"] Zoe Project" or fashion magazines in general, "SI" is a wonderfully human window into the day-to-day innermost workings of the industry. I expected this doc to be a fast-pasted, pumping catwalk, madcap ride, but it's actually quite contemplative. Models (and their crazy world) don't figure in too heavily. "The September Issue," after all, is just that: an "old media" printed periodical (albeit dominated by pictures), and Wintour's world is anything but frenzied. (Sing to yourself the Mary Poppins' song: "A British household is run with precision….")
I was hoping to learn something about color and fabric and artistry and design, and I did. Anna is less candid about her rationale than Grace, and because of that, Grace begins to steal the show. Grace comments that she feels "left behind," because she's a "romantic," and she hearkens to a sensibility of the past (which shows up so elegantly in her artistic choices—I'm with you, Grace!) However, she draws herself up bravely and says: "But we have to charge ahead." Anna echoes these words about fashion being futuristic: "So, what else?" This must be the meaning of "fashion forward."

Never having flipped through even one issue of "Vogue," I was pleasantly surprised that Wintour's choices tend to be classic rather than avant-garde (like the New York Times Style Magazine which I DO read: you know, models throwing raw meat at each other, sitting on rubbish heaps, and often dressed in garb that one wouldn't even wear on Halloween). The ethos of "Vogue" is to tell stories through the photos, to create thematic worlds of fantasy and make-believe. Wintour's personal style is conservative, feminine, multi-colored, contained and slimline—always looking like a young Mom from the 60's or 70's. Her hair and makeup fit her perfectly and give her a certain agelessness.

What's fascinating about the Vogue offices and those that work there, is that it seems Wintour alone dresses up every day. Others, especially the women, are make-up free, with often unkempt hair and the plainest of clothes. Most are model thin. There are many wonderfully human ("they're just like us") moments, inclusive of Anna, Grace and everyone else: When Anna leaves the room, the staff look around nervously: "So what are we supposed to do with feathers this Fall?" Someone breaks the tension: "Wear 'em!" And even the best designers make giant fashion faux pas. Wintour herself wishes for "a better back end."

In the opening minutes of the film, Wintour shares that she thinks some people are intimidated by fashion, they don't understand it, and so they put it down (reminiscent of Anne Hathaway's character in the film "Devil Wears Prada" being cut down to size by the Wintour-character when she giggles at the seriousness with which everyone is taking fashion).

So, do nuns care about fashion? Why not? We're women, aren't we? At World Youth Day 2000 in Rome, I was with twenty other congregations of Sisters. We voted on the prettiest habit, and the Sisters of Life won. Designer: the late Cardinal O'Connor.

OTHER STUFF:
--Anna Wintour wears/promotes fur. :[
--There were many men in my audience. The whole audience felt free to groan (disagree) with Anna's decisions.
--"September Issue" has lots of genuine, not-set-up humor.