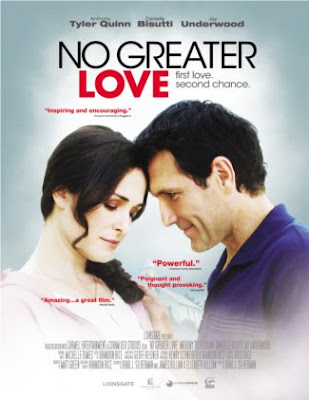 At the beginning of NGL, husband Jeff (Anthony Tyler Quinn) and wife Heather (Danielle Bisutti) fight over Jeff's stubborn dedication to work, which often takes him away from home. Heather descends into a spiral of substance abuse and disappears, leaving Jeff with their young son, Ethan (the pre-adolescent Ethan is played by a talented Aaron Sanders). It's a smartly-done exposition, but then the story logic and emotional timbre unravel from here on out and the whole movie screams ideology. That horrible kind of religious ideology that subordinates the truly human (and therefore truly godly) to misguided derivative platitudes that end up denying the truly human. This is the kind of ethos that makes non-Christians (rightly) run as far away as they can from Christianity. NGL confirms their (mistaken) fears that God wants to obliterate our personhood, squelch our humanity, and turn us into robotic, irrational, uncompassionate religious operatives.

Where to begin? The writing, especially the dialogue, is often stultified and doesn't flow. Genuine reactions to new information do not happen. E.g., when Jeff tells his girlfriend (Heather has been gone for about ten years) of Heather's disappearance, she doesn't ask right away if there are any clues to her whereabouts. She asks this later. This is called the writer's objective rather than the character's objective. The writer's objective must always take second place, or rather be hidden in the character's objective, but we see it baldly throughout NGL. SPOILER ALERT: When Jeff and Heather finally meet again, Heather has become a Christian (while Jeff is not). Heather is strangely detached from wanting to see her son, and the first place Jeff takes her is to see a friend of his. When she is finally reunited with her son, she is more than willing to abandon him again if it's "God's will" that she move to another State. ("God's will" is discerned by an extremely deterministic notion: If God allows this or that to happen, then this or that course of action MUST be taken. There is very little room for reason, intelligence, free will, or even kindness and love.)

Strangest of all, however, is how marriage is viewed. Even though Jeff and Heather's marriage was not a Christian marriage, marriage is a natural institution, and hardly anything is said about the essence of marriage. The only thing that determines whether or not Jeff and Heather are actually married is the question of whether or not Jeff signed the divorce papers, and even though this is technically correct for a non-Christian/non-sacramental marriage, it is all rather cold and clinical (as well as requiring of the audience a breadth of knowledge about the institution of marriage). And later, when Heather's pastor and his wife urge Heather to stay with Jeff, it seems mainly to "influence" him and hopefully make him a Christian.

As a mini-refresher on the sacramental, and therefore Catholic, understanding of Christian marriage: it's indissoluble. Civil divorce is "allowed" by the Church for legal reasons (property, child support and custody, etc.), but divorce itself is not recognized by the Church because it's not recognized by Jesus. Why not? Because marriage is meant to reflect the faithful, forever bond of Christ and His Church, that is, marriage is meant to show us how God loves us. But we're only human and sinful and life is messy and sometimes married couples can no longer live together. Terrible things can happen. Yes, and so separating may be necessary.

What about annulment? Isn't that just "Catholic divorce"? No. An annulment says that the necessary grounds for marriage did not exist from the get-go (although none of the parties involved knew it at the time). So there was never a true marriage in the first place. But doesn't that make one's children "illegitimate"? Absolutely not. Again, "illegitimate" is a civil, legal term and concept. Human beings can't be "illegitimate" in God's eyes (and shouldn't be in ours). It's only the State that calls children "illegitimate" if there was no legal bond between parents when the child was born. So, you mean to tell me that because there have been hundreds of thousands of annulments granted by the Catholic Church in the U.S. (in the 20th century), that there have been that many "never was" marriages? Ah, here's where it gets problematic. Has there been an abuse of giving out easy annulments* in the U.S.? Oh yes. John Paul II addressed this many times during his pontificate. At one point he even appealed to the couples requesting annulments themselves and asked that they really examine their consciences as to whether the conditions for valid marriage existed when they got married. (For example, if couples just keep vaguely claiming that they were immature or not psychologically ready—at whatever age—just about every married couple could say that. All of life is a growth process.)

NGL leans toward a kind of Christian fundamentalism. Christian fundamentalists purport to "take the Bible literally," which, of course, they do not. Otherwise they would have chopped their hands off and plucked their eyes out when last they sinned with them. They also do not take Jesus' teaching against divorce literally. However, we know that the Bible DOES have to be taken literally ACCORDING to the literary genre and MEANING God intended. Which is why we need the Church, "the pillar and bulwark of truth" (1 Timothy 3:15) to help us INTERPRET Scripture, otherwise we become like "sheep without a shepherd, each going its own way" (Isaiah 53:6) and we wind up with 30,000 Christian denominations—and counting—in the USA alone. When we cut ourselves off from Peter, our Jesus-appointed shepherd (and his successor, our "German shepherd"), we can come to the oddest conclusions on our own.

How does NGL lean toward fundamentalism? By taking "literally" the passage from Ephesians 5: "…wives obey your husbands." I just love it. This one line is frequently excerpted from the whole passage which includes: "Husbands love your wives as Christ loved the Church." Whoa! What a big bill to fill! A professor at a small, orthodox Catholic college I attended said: "Technically, if husbands aren't loving their wives as Christ loves the Church, why should wives obey them?" Also, the MUTUALITY of love and marriage is missed (by taking only one sentence out of its context): "Submit to ONE ANOTHER out of reverence for Christ" (Ephesians 5:21). Heather begins "obeying" Jeff in all matters. Asking him what he wants her to do in every little situation, which, appropriately, drives Jeff nuts. Until the pastor explains what she is doing. In fact, Heather's whole demeanor now is that of a demure, shrinking violet.

From a story-telling point of view, there are several large flaws. One is that Heather protests she tried but couldn't find Jeff and Ethan (even though they eventually ended up living in the same town under their own names and Jeff owned a business). In an age of Google, this is just not probable. Another is that it's emphasized that Jeff has not mended his workaholic ways, and this continues to greatly disturb Heather, but then the issue is dropped and never dealt with. There's an attempt to apply 1 Corinthians 7:12-16 (about non-believers married to believers) to Jeff and Heather's situation, which makes the plot points obscure and technical (never a good thing), not to mention, confusing.

I would have just dismissed NGL as an unfortunate attempt to make a movie in support of fidelity in marriage, but when two well-known Catholic media companies began promoting NGL as a wonderful movie on marriage, I became alarmed. I even checked with one company to make sure it was Catholic and not simply Christian. I called them up and asked if they had seen the movie or if they had any theologians on staff who vetted whatever they were promoting. Thus, this review.

We need to make sure that in our enthusiasm for Christian entertainment and the promoting of Christian values and outcomes, we don't begin compromising quality and the fullness of truth. We don't need to. We can't afford to. The end doesn't justify the means.

Be on the lookout for a new movie by the producers of "Fireproof" called "Courageous." It's about fatherhood. Here's hoping it will be as great as "Fireproof"! http://www.courageousthemovie.com/

*Things are somewhat better now, but in the 70's and 80's, certain dioceses were known for their McAnnulments.