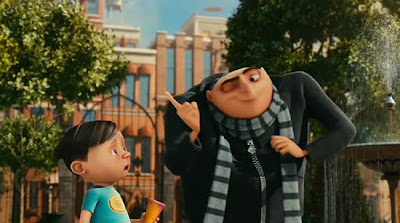 Run, don't walk to your nearest cinema and experience this feel-really-really-good movie! OK—I'm tying it with "Diary of a Wimpy Kid" for best movie of 2010. (I have to honor what I said about preferring live action figures over animated ones.) But here's the thing. It seems the animated movies are putting all the tenderness and sweetness that we're all longing for in real life into the animated films. (Think "Up," and "Toy Story.") And I don't think that's because these films are geared for kids. I think we're afraid to express these sentiments (that only make the world go round, make life worthwhile, make life bearable), because we think life is too harsh, or real for that, or that we're just being corny. Well, give me corny or give me death. But it's not corny. The softer side of life is just as real as the rougher side.

"Despicable Me" is something completely different. If you saw the trailer, you laughed, didn't you? Well, there's lots more funny in the movie. The first thing that strikes you is the evil Russian accent. What is this, Boris and Natasha from "Bullwinkle"? Isn't this a leftover from the Cold War? (Maybe not, seeing as how we just kicked a bunch of Russian spies out of the U. S. of A.) Is this movie from people who actually REMEMBER the Cold War (check out the 1969 Moon Landing flashback—hilarious)? Or are Russian accents just funny? I mean, is this PC? Are we even ALLOWED to do this? Fear not--and I hope I'm not giving anything away by saying that perhaps the evil Russian villain, Dr. Gru, also has a softer side?

Basically, the plot is: two super-villains trying to outdo each other in supervillain-ness, that is, stealing the great landmarks and monuments of the world. It's WAR in the villain-sphere. What a great premise. Dr. Gru has an army of "minions," little yellow capsule-shaped creatures that wear blue overalls and speak their own language. "Minions" are not very bright (even though some glow in the dark when needed). Three little orphan girls move in on our super-villain and change his life. OK—maybe that's a spoiler, but you have no idea HOW. You just don't know what's coming next in this romp.

The filmmakers have to be PARENTS because of the loving attention to kinder-details. There is no doubt about the filmmakers' first-hand initiation into a child's world: the crazy exchanges when trying to reason with kids, the little rituals that are so important to kids, the whole way kids approach the world, the way kids make you see things their way.

THEOLOGY OF THE BODY? Oh yeah. Guys will love the jokes and explosions (while learning valuable lessons in true manhood, heroism, Daddyhood), while gals will see themselves in three of the most adorable little girls ever to grace Miss Hattie's Home for Girls. (Miss Hattie looks exactly like Megan Mullally, but MM has nothing to do with the movie.) All will HAVE to admit by the end of the movie: Thank heaven for little girls. I'm gonna use clips of DM for my TOB talks. Seriously. REAL heroism (which—NEWSFLASH!--often seems like weakness, cf. Jesus) makes guys feel good, and ladies love it! (See the girls' dance rehearsal scene.)

Note the anti-hype. The skillful use of silence. You probably saw it in the trailer. There are Wall-E-esque sequences with no words, just music and sound effects. Luscious. And then, characters are also having actual conversations lasting longer than a soundbite. With pauses in between. Perhaps it takes animators, who spend long, patient hours at their craft, intensely collaborate and expound on story and vision ad nauseam, to think, hey, maybe this is a better way to live. Let's show it. Maybe the animators are taking us to a "slow life" or "slow-er life" tipping point (like the "slow food" movement). I'm in. Animators have incredible heart. There's just such a wholesomeness here (and I also like films dealing with tragedy and sin), such a feeling of DM coming from a good place, from good people…. Animators will save the world!

We Americans have made a "dream" for ourselves. And we've made a mess of it. Maybe we can re-dream ourselves through art. Isn't that what art is for?

The random scene I laughed the hardest at (among many, many riotous scenes), was when Dr. Gru was parking his enormous, outlandish, angular villain-vehicle and bumping, nay, smashing the car in front and in back of him, like, COMPLETELY out of the way. And all I could think was, he didn't have to go THAT far, but there are people in this life who DO that, who just want what they want and everyone else be darned and they just overdo everything. HILARITY. I remember hitting the arm of Sr. Gemma's seat repeatedly at this scene and having to seriously stifle myself.

I'm so glad adults are loving this stuff, too. Young adults (not married, no kids), also, are big fans.

--Went to the theater with one of our Korean Sisters (Sr. Gemma). Had to explain the words: "despicable" and "minion."

--There's even a PRAYER uttered by the orphans! Sr. Helena like.

--Pharrell Williams and the ever-amazing Hans Zimmer did the seamless and greatly variegated ear-honey music. SUPERLATIVE. NEVER invades. And yet UBIQUITOUS. Disappears into the action like Tang in water.

--DM bears out what we were taught at film school: the more specific you are the more general you are. If you get real specific about something, people will be able to relate.

--Great "buttons": ending each scene on a punchy note.

--I fault this movie on only one count: Dr. Gru's nemesis, "Vector," was supposed to be much younger, and he looked it, but the voice-casting was a much older man's voice. Did not fit.

--Stay for the CREDITS. Not only is there a hysterical "contest" by the minions (in 3-D!), but you will see tons of French names. Perhaps the wonderful whimsy, the joie de vivre is partly from them.

--The first hint that Dr. G might not be as evil as he seems is that he's afraid of his own dog. Kyle--the world's ugliest dog!

--Also, notice how Dr. G, in very tiny increments, begins to listen to his instincts to protect and take care of the girls....

--The girls' beds are made out of old Russian BOMBS! (I can't breathe I'm laughing so hard!)

--Great scene at end that simply and VISUALLY shows our super-villain-hero's two choices: SOMETHING VERY BIG (nothing) or SOMETHING VERY SMALL (everything).

--This is a CHICK FLICK in the BEST sense of that word! "It's so fluffy I'm gonna die!" But do NOT tell the guys.

--What's DM really all about? SPIRITUAL FATHERHOOD. See VJP2G's "philosophy of the body" book: "Love and Responsibility" which came out in 1960. (Much more readable than his "Theology of the Body" text.)

Email ThisBlogThis!Share to TwitterShare to FacebookShare to Pinterest
Labels: despicable me