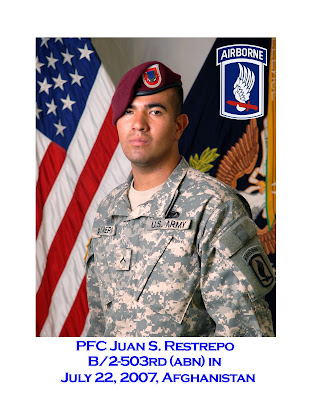 There is nothing new about war. There are no new American war documentaries. It seems like the same old story over and over again. The country asks her young men to fight for her in a not-always-so-clear war with not-always-so-clear rules of engagement. The big picture is often murky, complicated and disconnected from the small picture the soldiers are actually engaged in. The soldiers may not always be able to do what they know will work, will succeed, but must follow orders from the top. Men answer the call for a whole gamut of motivations (from the pure-spirited Pat Tillmans to the school/career opportunists to the adventure-seekers). But all, it's safe to say, love America and her way of life, want to protect her, but also respect what is best in other human beings and their cultures. After the first of their buddies is wounded or killed, it all turns personal, ugly and revengeful. Don't these people know we're trying to help them? The end of the war feels out of view. What would success look like? How do you fight a hidden, constantly multiplying (albeit in trickle-fashion) enemy that doesn't want anything you can offer them? Or rather, what they want is nothing you can offer them? A sense of futility must necessarily settle in.

"Restrepo" is the name of a medic with the U.S. Army's Second Platoon in the Korengal Valley (the most dangerous place for the U.S. military in Afghanistan, near the Pakistan border). Although we barely meet him, he becomes the centerpiece of their fifteen-month deployment and of the documentary.

The writer, Sebastian Junger ("A Perfect Storm," "A Death in Belmont," and now, "War"), was embedded with the troops along with director Tim Hetherington, to capture the lives, missions, and firefights from inside the bunkers, as well as the heads and hearts of the handful of men securing this crucial pass used by the Taliban. They take fire every day. And give it back. It's a crucible of offensive and defensive strategizing with excursions to the local mountainside homes to try to discover who's on what side and find out who will talk. One young man tells them plainly that if he tells the Americans about the Taliban, they will kill him.

Captian Dan Kearney meets frequently with Afghan elders (a sage, squatting bunch that calmly negotiate, sip tea, listen and nod as they have done with foreigners for centuries, fingering their prayerbeads all the while). They question him as to the whereabouts/welfare of men who have been taken for questioning. Kearney answers in terms of "good" and "bad" men. At one point, the planes Kearney calls in to bomb the enemy kill civilian women and children (70% of the ordnance dropped in the war was dropped in this valley). The camera does not record a lot of remorse. At times, we Americans can look like bullies.

We have seen this hand-held trench warfare footage in other films, or simply in news coverage. The male bonding, camaraderie, nostalgia for home, patrols, monotony, lighter moments, and even the casualties are fairly standard, except that this is a fresh group of mostly young soldiers in a 21st century conflict. The filming never gets too graphic and the horror of war never really leaps off the screen, it's more the ordinary routine interspersed with feverish excitement and fear that comes through. The filmmakers really seem to be pushing hard to zoom in on every little expression of emotion from the guys in the field, and during the interviews, the camera is fawning and trying to squeeze tears out of them during very long pauses that are meant to squeeze tears out of us, also.

No matter how long our present wars run, we need to go back and keep asking the original questions: What are we doing? Why? Do we even have a "right" to be there? Is it in accord with international law/treaties that we be there and do what we're doing? Is it moral? Is it just?

The men seem eager to experience all there is to be experienced during this, their difficult tour of duty. One of them comments that there is no greater high than getting shot at and surviving. He has no idea how we will return to civilian life after that. But there's also a sense of, "This? This is it? This is what life is about? This is all that life has to offer? This is what being a man is all about?"

I've heard soldiers tell other soldiers (often father-soldiers their soldier-sons): "Preserve your humanity." The men of the Second Platoon did just that in their remembrance of their fallen friend.

--First of all, Junger's book "War," is much more gritty and describes in detail the dire circumstances these soldiers were contending with. It just doesn't come across in the movie, mostly because many things are simply not shown (e.g., infestations of tarantulas, the fact that their bodies smelled of ammonia because their fat was gone and they were burning muscle, etc.).

--"The Korangal Valley is a sort of the Afghanistan of Afghanistan: too remote to conquer, too poor to intimidate, too autonomous to buy off." –"War," by Sebastian Junger

--After five years of hell in the Korangal Valley, our military command decided to close the U.S. outpost.

--I try to watch a lot of these type of war films, coverage, documentaries, etc., and read the books, memoirs. I feel obligated, actually, because this is my country, too.

--One of the soldiers was raised by a "hippie Mom" in Oregon who wouldn't even let him have a squirt gun.

--The interviews are in such extreme close-up that we're almost inside the soldier's pores. Sr. Helena does not like this technique and can't wait for the trend to end.

--In the interviews (done after their tour of duty), the guys look so strange and uncomfortable out of uniform. Strange.

--Sgt. Brendan O'Byrne had a full-on mental collapse at the end of the tour when he was finally released from the daily tension between life and death. And he's not alone among the scarred. Even the ever-smiling Ortiz now says he takes 4 or 5 different sleeping medicines that don't help and he'd prefer to stay awake anyway rather than have the nightmares. Obviously, the human psyche was not made to withstand war. A priest-friend of mine asks: "Then why do we keep doing it?"

--"War is an adventure from which there is no return." –VJP2G

--Our essential unity as Americans—as exemplified by these multi-ethnic soldiers—is really quite remarkable. I first became aware of this when I lived in Canada. The organization and discipline of American soldiers is pretty impressive.

--The guys seem self-conscious on camera although this is "the most filmed generation" ever. Maybe they were afraid of getting reprimanded for various words/actions. At other times, they seem to almost be playing the celebrity, swaggering a bit. But at the same time, they probably get how surreal everything is. They play war videogames in their downtime. They play-fight with each other in their down time. They talk about hunting in their down time. Men love to fight. But it was such a contrast to watch several of the men playing the guitar so well and so delicately.

--Sebastian Junger, who lived in MY hometown of Belmont, MA (and wrote a book on the Boston Strangler who did construction work on his house when he was a little boy—the Boston Strangler also came to my house—but that's another story for another time), recently got married and owns a bar in NYC. But it seems he is addicted to war journalism and wants to head back to Afghanistan.

--Christians are called to love everyone, so it is possible to love one's neighbor, one's enemy, and also love the soldier, but hate the war. (I'm sure a lot of soldiers hate war, too, ESPECIALLY the very wars they're engaged in!)

--It would be indecent to say whether or not this documentary is "well-done" or not or judge it for art's sake. It just is what it is. And of course the whole thing is wrong because there's nothing right about war.

--At the end of the History Channel's "World War II in HD," an old veteran simply says: "What this world needs is love."

Email ThisBlogThis!Share to TwitterShare to FacebookShare to Pinterest
Labels: restrepo