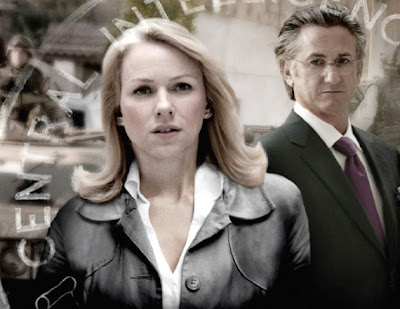 “Fair Game” is one of those very-recent history movies, based very tightly on a true story. It’s actually two stories evenly balanced into one: that of Ambassador Joe Wilson (Sean Penn looking all Michael Douglas-y) and his wife, CIA operative Valerie Plame (Naomi Watts). These two distinguished actors knock their respective roles out of the park.

The historical anecdote is, of course, the lie that started a war. The lie that Saddam/Iraq had a nuclear program, was enriching uranium and had weapons of mass destruction (WMDs). The “proof” was that the country of Niger had been providing the materials—something Joe Wilson disproved on a fact-finding mission. In retaliation for Wilson not going along with the “program” to get the war on, and instead turning to the news media to out the lie, Valerie’s identity was revealed to all the world by none other than the White House/U.S. government itself.

This action of disclosing the identity of an American spy was illegal, and although the chain of command went all the way up to the Vice President, it was underling Scooter Libby who eventually took the fall.

Since the start of the Second Gulf War took place almost ten years ago, this film can be very instructive for younger people who did not live through these events, so fresh in older minds. In fact, there is a movement in education to use these types of films in history classes—while simultaneously checking the films for accuracy and comparing them with reality. Many actual TV newscasts of President Bush and others are heavily interwoven throughout the film.

All is pretty much exactly as I remembered it unfolding. Even the mood of the country is recreated: the fear and panic right after 9/11, the patriotism, the accusations of disloyalty to America and the troops if one was against going to war, the fact that 50% of Americans thought Saddam had attacked the Twin Towers (making the connection as they heard the war drums rattling every day in the media), the “shock and awe” as the bombing of Baghdad began. Another comment is made about us recently having been allies with Saddam during the Iran/Iraq war: “We put him there.”

This incident was a pretty clear-cut one. Other news stories can tend to get all murkified and we wind up with what one character says in denial and defeat: “Who knows what really happened?”
Much of the film centers on what the stress of it all did to Joe and Valerie’s marriage, their decision to fight, their love of country, their love of truth. (One does have to ask, however, about the truthfulness of being a spy! The filmmakers must have anticipated this, because at one point, Valerie is asked how she can look people in the face and lie, and she responds: “Know why you’re lying, and never forget the truth.”)

Both Joe Wilson and Valerie Plame have written books about their experiences.

--I just realized how much my friend Michelle Halm looks like a raven-haired Naomi Watts. And have told her so.

--I bet Sean Penn loved making this movie and “sticking it to the man.” Ha ha. Although I don’t care for his leftie politics, I applaud him profoundly for his humanitarian work: Katrina, and especially Haiti.

--Fascinating brief (real) footage of skeptical faces of the representatives of various countries at the U.N. as Bush makes his case to go after Saddam.

--Do NOT invite Joe Wilson to your next dinner party.

--The great title is a quote from Karl Rove who said: “Joe Wilson’s wife is fair game.”

--I really admired Joe Wilson when he spoke out. He really was all alone. I’m glad he has a movie now.

--If you like “Fair Game” you’ll like “Spy Games” (fictional) with Brad Pitt and Robert Redford, about how the U.S. sometimes treats its friends, what spying might be like, and what the spy might ultimately have to do to avoid their own government.

--Other good Iraq/Afghanistan War movies: “Brothers at War” (documentary), “Restrepo,” “Three Kings” (1st Gulf War—heavily watched by soldiers DURING the 2nd Gulf War), “Jarhead (1st Gulf War),” “Hurt Locker.” I have reservations about all these movies, however, because none really show the horror and repercussions of war.

--THEOLOGY OF THE BODY? A beautiful portrayal of getting through extremely tough times in a marriage.

--Saw this film in Boston—a very politically-active, ideological city. Mostly upper middle-aged audience. There was a kind of reverent silence during the whole thing and the audience didn’t move till halfway through the credits. I love my people. :]

--Great speech at the end about what it means to be an American.

--As much as I was (and am) against the war in Iraq (and women in combat!), even I got swept up for a few days with that amazing photo-op of the young blonde female soldier being handed a flower by a grateful Iraqi woman as the statue of Saddam was pulled down in Baghdad. The power of image, the power of narrative, the power of wishful thinking, the power of nationalism, the power of interpretation, the power of power.

--Can someone please tell me why we REALLY went into Iraq?