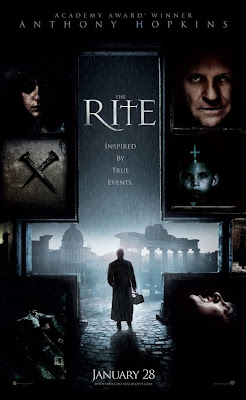 “The Rite” is not scary. Not for adults (and I’m a scaredy-cat adult) at least. But it’s a good story with lots of thought-provoking dialogue.

An almost-ordained American seminarian, Michael Kovak (Colin O’Donaghue), winds up in Rome at “exorcist’s school,” but his skepticism and doubts about the devil AND God continue to plague him. His Rome professor sends him off to an unorthodox but experienced and successful exorcist, Fr. Lucas (Anthony Hopkins--in both a brilliant and delightful performance--makes a great priest), in order to be “convinced.” But Michael is a tough nut to crack and remains of the belief that all he is witnessing is psychological pathologies.

The film avoids clichés and puns about the devil, but manages a very sophisticated humor in the face of evil—something that just rings so true. God and humans are fun and funny, Satan is not. He’s kinda angry and takes himself very seriously and is closed to and incapable of any originality.

Is this a film about faith? Yes, but not just religious/theological faith--which it is, explicitly! It’s also about human faith in our fellows, in ourselves, and in where “life” leads us. When we can’t see the total picture, we need to believe there is a “reason,” that somehow things make sense in spite of our limitations, in spite of ourselves, and that we’re all on the way—we’re not there yet—and it’s not terribly helpful to dig our heels in in disbelief. Life is not static. Michael makes the mistake of equating truth with certainty, something no one is entitled to.

Accuracy? The film is “suggested” by the book “The Rite,” by Matt Baglio, a journalist, and the book is based on Baglio’s experiences as he accompanied an American exorcist, Fr. Gary Thomas, through his exorcist’s training in Rome. Fr. Gary was available for interviews to promote the film which I thought was odd, since generally exorcists keep a low profile. But perhaps--with his bishop’s permission I’m assuming--and in an effort to educate (and re-educate) the public about the reality of the demonic, this might be seen as a “catechetical” effort. It's also a bit vocational--not that anyone would or should aspire to being an exorcist, but it shows priests standing up to evil....

The movie gets a few things askew that are probably only irritating to Catholic geeks like myself: 1) the movie keeps talking about Michael getting ready to take his vows. Diocesan priests don’t take vows. They get ordained, and make a promise to the bishop. 2) The devil keeps calling Michael “priest,” but he’s not yet. Maybe the devil respected him like a priest or something, but the devil is pretty shrewd and only obeys ordained authorities. If even that. 3) Um, a doubting, in-a-vocational-crisis seminarian would NOT be sent to Rome to exorcist’s school. 4) The screenwriter couldn’t resist having a little bit of a showdown between the faith/strength of the exorcist and the temptations/strength of the devil. But it’s not about that, even though Satan would love to destroy all people and especially priests and exorcists. It’s about God vs. the devil. But it seems to be so hard for film to take God seriously as a real character, a real person who really acts. But “The Rite,” does not totally miss the mark on this! St. Michael and Our Lady majorly figure in, too, which is quite correct. Who-Is-Like-God? Viva la Virgen! Actually, "The Rite," does a fine, fine job of making spiritual things, the spiritual world, palpable.

Fr. Gabriel Amorth (who is one of our Society of St. Paul priests and former exorcist of Rome) wrote two best-selling books printed in English by Ignatius Press: “An Exorcist Tells His Story,” and “More Exorcist Stories.” I held off reading them for a long time because I felt they would be sensational, and who wants to give Old Scratch any limelight, anyway? But when I read them, they were very instructional about how evil works, even in very ordinary circumstances. Without going into a lot of details, my first encounter with manifestations of a demonic nature and deliverance prayer (NOT said by me) was in the Charismatic Renewal in the 90’s. I was instructed in and read a little about it back then. There are different levels of demonic interference: infestation, obsession, etc. “Possession” is a total taking-over the person by a demon—or as much as a demon is capable of invading a person.

It’s important to know that a person is not always to blame for this interference. The first books I read said there are three ways that the devil gains entrance:

1. Dabbling in the occult or explicitly calling on Satan.
2. A life of unrepented sin.
3. Emotional wounds inflicted by others.

Fr. Amorth added another in his books:
4. We’re not very bad, we’re very good, and Satan tries to stop us from doing more good.

The important thing to remember is that no matter what the case, Satan can’t force our will. As long as we’re alive there’s hope, and often this interference can be healed with the help of the ministry of the Church.

The movie, “The Exorcism of Emily Rose,” which IS scary--based on the true story of a young woman in Germany--bears out #4 above. We might think that getting possessed is the worst thing that could happen to us, and although it’s totally dire, the worst thing that can happen to us is that we freely choose to sin. As Fr. Jeffrey Grob—Chicago’s exorcist since 2006--said in a recent article in the Chicago Sun-Times: “One good sacramental confession is more powerful than 100 exorcisms.”

--Interesting, good stuff about how a vocation can work in someone’s life, and, indirectly, the call to celibacy for the Kingdom.

--Stuff I question (even for poetic license): “A persistent tremor in a limb” is a sign of possession?

--True: Exorcists don’t always know how things will turn out….

--True: The work of exorcism takes its toll on the exorcist.

--Movie really brings out how much Satan hates us.

--O'Donoghue also makes a good seminarian, but is a bit one-tone, one-note, one-mood. Perhaps he could have played it slightly more nuanced?

--VERY interesting how temptations to fornicate are seen as coming straight from hell.

--The devil knows all our weaknesses and sins and knows a lot about a lot of things. Except how to love.

Chicago exorcist: The ‘evil one’ is very real - Chicago Sun-Times

Email ThisBlogThis!Share to TwitterShare to FacebookShare to Pinterest
Labels: anthony hopkins, the rite