MOVIES: "SEASON OF THE WITCH" 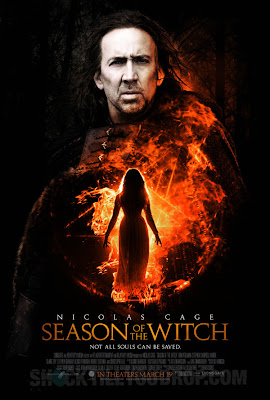 “Season of the Witch” is one of those movies that had such potential, but drowns (like the three women accused of being witches in the first scene) under the weight of its own petering out of imagination. The premise was solid, the casting was appropriate, the execution mostly enjoyable: What went wrong?

A frail, pretty young woman (the fetching Claire Foy from “Little Dorrit” whom we’ll be seeing plenty more of) is accused of being a powerful witch who has brought a deadly plague on every town she passes through. Two errant knight-crusaders (Nicholas Cage and the always spot-on Ron Perlman) are charged with bringing her safely to a monastery where she will have a fair trial. So far so good. The best scenes are the subtle, creepy interactions with “the witch,” a harmless looking creature, but as soon as you engage in conversation with her, she will find your weakness and use it against you.*

Without giving too much away, the whole thing climaxes with a ridiculous-looking, goofy, gray winged gargoyle that looks like an enhanced Antz. After tons and tons of supernatural powers and special effects, this wimpy reptilian bad guy can be pinned against the wall in mano a mano fighting with Nic Cage. Yeesh.

There are uneven directing and editing problems, also. So many times I wanted to shout: “Cut! Cut!” And some of the camera movements are so Austin Powers-like, I couldn’t believe the folks in my cinema didn’t burst out laughing. But these missteps occur in the middle of some great, tense sequences, which is a shame. This is not a tongue-in-cheek movie, although there are funny lines. It’s more of a supernatural thriller, with sometimes comic-book-hero action.

The Church is made to look like the powerful worldly entity it was back in the day, and there’s a fair amount of anti-religious barbs and jokes-at-the-expense-of-religion (which, of course, would have been very appropriate to the times, and no doubt, often well deserved). But Hollywood also recognizes the spiritual power wielded by the Church. However, the only hope to stop the darkness is “The Book of Solomon,” painstakingly copied by hand by monks. Oh dear: “Book of Solomon.” At first I thought—professional, informed Catholic that I am—“You mean the real book of the Bible: The Wisdom of Solomon? But how can you slay witches and demons with aphorisms?” I was so confused. Then I realized we were in quasi-fictional Dan Brown territory, because this Book of Solomon, although written and illuminated by monks, is “the book used by all the holy men through the ages” to overcome evil. Ooooh. This isn’t the Catholic brand, it’s generic. Leave it to a nun to spoil all the fun (by pointing this out).

A word about Nicholas Cage. In the first scene we see him in, we think “oh-oh.” He is sticking out like a sore thumb with his distinctly American-casual-diction and “I am Nicholas Cage” presence. My thoughts drifted to Kevin Costner in “Robin Hood.” The cast is mixed with Brits who can make ANYTHING sound like Shakespeare and make you utterly believe ANYTHING they say. I don’t know if Nic Cage can do period pieces. And I like the guy’s acting. I just think he needs really extreme characters with psychological-type quandaries.

Is “Witch” worth seeing? Yes. But I think things are at their spookiest without CGI! Why did the realistic-looking wolves (who were probably CGI themselves) suddenly need turbo-CGI faces? They became LESS scary! This is my beef with Stephen King, too. He sets up these amazing scenarios that get under your skin, and then he jumps to some outlandish, bad drug trip story-line that could definitely never happen in my living-room/house/town/life. And I can no longer relate, and I’m no longer frightened or interested.

Although in “Witch” much is made of chivalry and vows to God--the true nature of evil is never dealt with. The evil of sin that lives in our hearts. There are fleeting references to sin and penance, but actually with a sense of disbelief. In the new book “Light of the World,” Pope Benedict says: “We have to recover the understanding that it is really necessary to come to terms with evil. We cannot simply shove it aside or forget it. It has to be worked through and transformed from within.”

Hollywood gets evil half-right. But we will not be saved by a book. Not even the Book of Eli. We are saved by our relationship with God, the living Word of God.

It’s so much easier to draw a sword and decapitate demons than it is to wrestle the demons within. Interior battles are hard, lonely, unseen, unapplauded and unvalued in our completely external, Twitterized, publish-my-life world. But as Thomas More said in “Man for All Seasons”: God and your little circle around you will notice, “not a bad audience, that.” Want to really man-up? Take up your cross of a life of discipleship, spiritual discipline and self-sacrifice. Only love, truth, beauty and goodness will win the day.

--*I am tempted to a do a feminist read on the whole female witch thing, but I’ll spare you. Suffice it to reproduce a line of dialogue here: “The witch will turn men against each other.”

--“The greatest persecution of the Church comes not from her enemies without, but arises from sin within the Church.” –Pope Benedict XVI

--Another word to Hollywood about CGI: I hate things morphing into other things all the time. Cease and desist, you shape-shifters!

--Like I said, I don’t believe this movie was meant to be tongue in cheek, so I think it was a bad thing when Monty Python came to mind once or twice.

--“Witch” might even be a candidate for “Mystery Science Theater 3000” because I was reflexively thinking up awesome MST3K lines as we went along.

--The real outdoor settings are spectacular with a mottled color palette of brown, blue, black and white.

--We could have done without the frequent “Happy Trails,” suspender-snapping, horseback reminiscences of the two knights. But Nicholas Cage looked like a good horseman.

--What was with those doctors with the bird beaks surrounding the dying Cardinal?? Looked occult.

--Some good advice from “Witch” about evil:

Don’t even talk to evil. It’s way smarter than you.

Turn to God and the Church.

“God will never abandon us.”

“We believe what we want to believe” to our own salvation or ruination.

Satan is the “accuser”—he’s always bringing up our sins before us (and not in a good way, to do something about them, but so that we’ll despair over them).