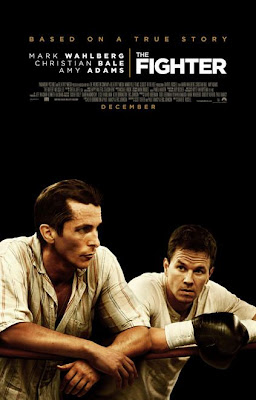 The buzz is true. “The Fighter” is a contender. An Oscar contender. If you ever, ever doubted Christian Bale’s acting chops (after those stiff Batman performances—hey, maybe the Batman WAS stiff and Bale is just playing to character)—get yourself to a cinema and be prepared to gape. “The Fighter” (based on a true boxing story) could be either Dicky (Christian Bale), a one-hit (literally) wonder, “the pride of Lowell, Mass.,” now washed up and on crack, OR his brother Mickey (Mark Wahlberg, who puts in an interestingly gentle and almost contemplative performance). Bale totally nails the Boston charmer/wiseguy attitude, Boston accent and mumbling-and-talking-in-bunches which isn’t easy to do. The entire cast gets it, too. Amy Adams, as Mickey’s girlfriend Charlene, latches on to the immediate, in-your-face, rapid-fire, Bostonspeak. Amy plays against type here as a lovely toughie who could probably hold her own in the ring, and is firmly in Mickey’s corner, even over against his family. Melissa Leo—whom we just saw in another Boston story, "Conviction," as the evil small-town police chief—plays the boxers’ scheming manager Mom.

The opening sequence is a wonderful introduction to the love between the brothers, their place in the community, and who they are as people and sluggers. This story never lets you go, there are no lags, only plenty of Oscar scenes, moments and performances, without them posturing to be “memorable.” Masterful movie-making all around. David O. Russell (“Three Kings,” “I Heart Huckabees”—both also starring Mark Wahlberg) directs, and it probably doesn’t hurt that one of the screenwriters is a native of the Bay State and also wrote the gritty “8 Mile.”

Dicky has always coached Mickey, but Mickey’s career is going nowhere and Dicky’s addiction is becoming a liability. Will Mickey stick with family or take advantage of other opportunities? This is the deceptively simple choice Mickey has throughout the movie. “The Fighter” has miles and miles of heart. You almost want to be part of this crazy, brawling, dysfunctional family that sticks together like glue. Almost. The dialogue is some of the real-est, non-stop, conversational banter I’ve heard in movies in a long time.

“The Fighter” is rated “R” for “language throughout, drug content, some violence and sexuality.” The instances of the “F” word are certainly pervasive and it’s used constantly both as an expletive and a verb, but the drug abuse is an object lesson, and “sexuality”? We see Charlene in her underwear, there’s implied sex between her and Mickey, and off-screen oral sex performed on a john by a prostitute in a car. The violence is not excessive or glorified—it’s just what this family does, the family business, almost matter of fact—but the punches during the fights are audio-enhanced to sound like oil drums thudding around inside a cement mixer.

God/prayer/religion are natural and interwoven like they really are in the lives of people of faith. Children are ever-present, and although they don’t have many speaking parts, they are important, precious members of the family who count, and about and around whom important decisions are made (even if the adults are often acting like big kids).

Definitely a feel good movie (after the bruises and cuts heal) about wanting to make your mark in life, and doing it for your family and the place on the map you call home.

--Make no mistake. This is Christian Bale's movie. Without the character of Dicky (and Bale's embodiment of him) this could have been a middling movie. Bale has managed to make his character a backdrop, a landscape for the whole film, thus enabling the other actors to shine. Amen.

--Like the actor who plays the pivotal role of the serial killer in “Changeling,” actor Jack McGee does such a realistic turn as Dicky’s and Mickey’s stepfather that you forget he’s an actor, too! (But I could also feel that in real life he is a New Yorker, and so he is. New Yorkers are truly unedited because they have a completely closed worldview--they have it all figured out, and they know New York is a world-class, world-vital city. Bostonians ARE edited because their worldview is not quite closed. For all their bravado they hesitate, they're not sure, they don't have it all figured out, they're still open and they have the "small city," "little brother" complex, especially toward the city of New York.)

--The extremely short epilogue of the real Dicky and Mickey doesn’t say much at all, but is just tastily random.

--THEOLOGY OF THE BODY? Well, “Fighter” certainly shows how a MAN can be USED for his body, how others can use his body as a commodity to make money. The female prostitution is a sad note. The premarital sex is not taken terribly lightly because both Mickey and Charlene are people of integrity in other aspects of their lives, and Charlene’s main concern is for Mickey to the right thing for himself, and even breaks up with him until he does.

--The soundtrack exposes Michael Brook as a fine connoisseur of the best music of the 70’s (even though the story is set in 1993) and present day. He includes at least two Boston bands: Aerosmith and the DropKick Murphys.

--The way Bostonians (and I’m sure they’re not alone) don’t want their own to get ahead is shot through this movie. (“Thinks she’s superior ‘cause she went to college!”)

Email ThisBlogThis!Share to TwitterShare to FacebookShare to Pinterest
Labels: the fighter