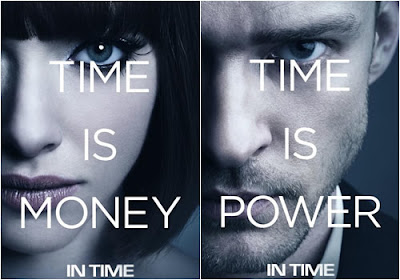 “In Time” is a sci-fi thriller set in a dystopian world (i.e., Los Angeles) with a fascinating premise: The new currency is not money but time. Everyone has a glowing green digital display clock on the underside of their forearm (reminding one of concentration camps) that ticks off the years, days, minutes and seconds. Poor people of the “ghetto” time zone have a short life expectancy and live from time-payment to time-payment. Rich people, who live in their own time zone (filled with “Surrogates”-perfect people), may have centuries. Or more. But everyone looks young because people are genetically engineered to live to twenty-five years old, and then they literally drop dead in one more year unless they can somehow get more time (often by fighting or gambling). Time can be “given” to another by a handclasp. (The concept of “In Time” is from the brilliant mind of Philip Dick who also inspired the films: “Blade Runner,” “Minority Report,” “A Scanner Darkly,” “The Adjustment Bureau.”)

“In Time” was written, directed and produced by Andrew Niccol--who wrote the excellent “Truman Show,” and amazing “Gattaca”—however, he flounders with “In Time.” Justin Timberlake (a solid actor) is Will, a scrappy ghetto-dweller who is given a huge gift of time by a stranger. However, the ever-watching “timekeepers” (the new police) begin tracking Will as he heads to the rich people’s time zone for some payback (the rich have an economic system that trades off the backs of the poor). “In Time” is rather “timely” given today’s economic woes and ever-widening gap between rich and poor.

Will gets close to the uber-time-wealthy Weis family and falls in love with their coddled and sheltered daughter, Sylvia (Amanda Seyfried). The head timekeeper (the ever-mesmerizing Cillian Murphy who could be the next Al Pacino) picks up Will for questioning while revealing secrets to Will about his deceased father. But Will escapes the timekeeper’s clutches, dragging Sylvia along with him both as intermittent hostage and love interest. They return to the ghetto where Sylvia learns how the “other half” lives and is moved to some compassion.

SPOILER ALERT: Will and Sylvia become both Bonnie and Clyde time-bank robbers as well as Robin Hood and Maid Marian stealers from the rich who give to the poor—with the justification: “If it’s already stolen, is it stealing?” (Which slogan, I was thinking, could start a real-life anarchical class warfare revolution of gargantuan magnitude, so I’m hoping the Occupy Everywhere people don’t see this movie.) The End.

The movie fails as a movie in many ways, and EVERYTHING needed to be shored up: directing, editing, acting (Amanda Seyfried—surprisingly—breaks NO emotional sweat whatsoever and makes her character and the whole story verrrry unbelievable. And she runs and runs and runs and runs and jumps out of buildings and from roof to roof in tiny dresses and 6-inch inverted ice cream cone-shaped heels).

There are constant breaks in the action/tension and lots of small, unnecessary, repetitive scenes that bore us to death. The story/dialogue is completely linear and often laughably simplistic. The dialogue does not “cut deep” into the world we’re introduced to—the characters always sound like they are explaining something to US. (To quote “The Truman Show”: “Who are you talking to???” It also imitates one weakness of “The Truman Show”: someone raised in a totally rarified environment immediately adjusts to a completely foreign world.)

The three twentysomething gals in front of me in the theater were NOT buying any of this movie (and it seemed like they were genuinely looking forward to this film as I was). We are simply used to much more sophistication in films these days. This might have cut it 10 years ago, but not today.

The music is nothing special and the set direction is truly horrid and fake. The “ghetto” is just too clean and nice, and if you simply look to the periphery of the action, everything screams “this is a set!” (Along with the fact that there are very few extras, so there’s never the feeling of a crowd or a multitude.)

Multiple Oscar-winning costume designer Colleen Atwood made unfathomable choices: the ghetto people are all snazzy dressers who look like they just came from an upscale nightclub. Um, I think Hollywood doesn’t always know how to do truly “shabby.” Case in point: Another recent film had a lower middle-class character complaining about the “small hovel” he was living in. What??? With a huge kitchen lined with glass-windowed cabinets and an immense free-standing island with a granite counter-top? Hollywood just doesn’t get it.

And yet, for all my criticisms, this is not one of the worst movies I’ve ever seen. The premise is still solid and the concept of giving freely of the most precious things in life in a cutthroat culture that doesn’t understand the concept of “gift” or charity is well portrayed.

There’s some great soul-searching about whether or not it’s right to want to live forever here on earth (especially at the expense of others): “For a few to be mortal, many must die.” Some of the wiser heads see an innate, existential need for death. Others, a practical need: “If everyone lived forever, where would we put everyone?” Or, to paraphrase Steve Jobs: “Death sweeps out the old to make room for the new.”

There is also—yay!—an explicit condemnation of applying Darwinian notions of natural selection and survival of the fittest to capitalism and human beings—double yay!

In actuality, time IS the only “good,” the only “currency” we have. We just can’t know how much of it we actually have on this earth by simply glancing down at our arm every few minutes. Unfortunately, we Catholics don’t seem to emphasize the preciousness of time very much any more (or our eternal destiny and the eternal consequences of our use of time). Recommended reading: “The Last Things,” by Fr. James Alberione.

--The citizens of the world of “In Time” were genetically manufactured, and the poor are cogs in factories. New York City’s Cardinal O’Connor warned of a possible future where humans would be created in laboratories for just such types of “menial” tasks. And as zombie-like soldiers for wars.

--Only Olivia Wilde’s character made us feel how scary it is to only have hours at a time left on your clock.

--Everyone is just way too calm.

--Big “fight” scene foreshadowed in detail so that when it actually happened, audience groaned: knowing exactly what they would have to sit through.

--“Are you insane?” is asked by characters of different characters about 14 times.

--The failures of “In Time” remind me of the failures of “Hotel Rwanda”: a completely tense set-up…and hardly any felt tension, with lots of little bouts of characters relaxing in between where there should have been no let-up. 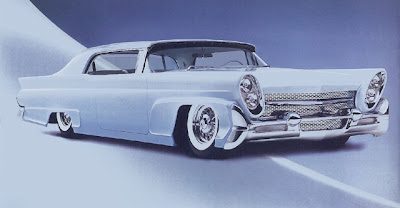 Email ThisBlogThis!Share to TwitterShare to FacebookShare to Pinterest
Labels: in time