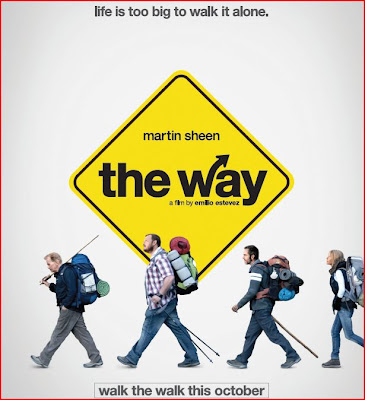 For anyone who has walked “The Camino”—the ancient pilgrimage to Santiago de Compostela, this film will be a treat as you relive your trek. For anyone who has not—this is your video travelogue, and much more! “The Way” is a journey film (physical and spiritual) and it’s a WALKING journey film.

Written and directed by Emilio Estevez--who also acts in it with his father, Martin Sheen—it’s a moving and all-too-common scenario of an estranged father-son relationship. Martin Sheen is the main character—a stubborn codger who winds up on “El Camino” with three aging Gen-Xers (one of whom dubs him “Boomer”). Boomer’s traveling companions are (successively): an hilarious, portly Dutchman (think John Candy in “Planes, Trains and Automobiles”), a chain-smoking Canadian gal, and an Irishman with writer’s block. They all have their issues to work out, but “The Way” pretty much avoids heavy-handed clichés in this regard.

This was a VERY difficult film to make. Think about it. Four strangers walking. For the entire film. But it holds your attention and interest the entire time. There are tiny suspenses, and a certain tongue-in-cheek, amiable self-consciousness of what a BIG METAPHOR FOR LIFE it all is. And we can see ourselves in this motley crew. The film totally works, totally comes together.

I don’t want to give too much away of the simple but rich storyline by telling you more of what happens, only that this film is a “sit back, relax and enjoy it” film. We are not given any beautiful countryside landscapes, even though we subtly note the changing seasons, because the film is shot in lots of tight medium range shots. This is squarely a film about people, not about breathtaking nature, and not about people being enthralled by breathtaking nature. But we WILL experience all the human customs, hospitalities and tropes along the Camino.

The lesson of the Camino seems to be that we’re all on it, whether we want to be or not. Whether we’re in Spain or not. And as the tagline of the film says: “Life is too big to walk it alone.”

“The Way” is as open ended as life. We have no idea what’s going to happen along the way. And opting out is really bad form.

“The Way” goes to great pains to make sure we understand that none of these “pilgrims” are doing it for religious reasons. I think at least one of them could have been. Hey, trillions of people from time immemorial have been earnest religionists. Why can’t we see that on the big screen (or any screen)? It almost felt MORE insincere to leave the believers out! It seemed to be a carefully-studied areligiosity. Any true acts of faith and devotion belong to those outside our little cadre. But of course, the reality is that many, many who take up the sojourn are NOT there for religious reasons. To each his own. And I guess it IS more reflective of our postmodern world where belief in God and expressing that belief through the practice of religion is something that is declining in the West.

--"The Way" is a filmic journey not to be missed.

--This film totally makes you want to go do the Camino or get out and hike with others…and Him.

--I think my favorite part was the Gypsy sequence. It’s another mini father-son story (there are MANY in the film)! But it’s tied as my favorite with the swanky hotel scene where they all start off in separate rooms….

--There’s a book about the Camino called “Walk in a Relaxed Manner.” “The Way” nails this pace, and maintains it consistently. Again, I think it must have been very difficult and very crucial to nail the right pace in a walking film! AND it’s NOT episodic, another huge would-be pitfall of this movie.

--Pope Benedict calls the Catholic Church in Spain “creative.” You’ll see why.
--All I can say about the incense thurible at the end: “W-H-O-A.” Pretty wicked awesome. At a screening, Martin Sheen said that in the old days, it was actually used as AIR FRESHENER for stinky pilgrims! Flying Febreze!
--Very funny how Americans are perceived in Europe and the rest of the world.
--There’s a certain amount of philosophizing, as one would expect along the Camino, but it’s not tedious.
--A short but beautiful cremation scene. I don’t think I’ve ever seen such a thing in a film.
--The soundtrack is mostly lovely light rock and folk rock. But light rock with teeth. And a very fitting Alanis Morissette ballad. Sometimes the walking is just silent. But the audio always always feels natural and right on the money.
--Martin Sheen looks like he’s in VERY good shape. It’s hard to even think of him as “Boomer.” Isn’t he the President of the United States of America? “The Way” could have devolved into “Grumpy Old Man on the Camino,” but Sheen is just too classy for that.
--At the very end, Martin Sheen’s character should have “littered.” Because of the wind blowing in the wrong direction. You’ll know what I mean when you see it.
--The only few false notes for me were the Canadian woman’s initial “introductory” speech as well as the Irishman’s. Both of them were a little too theatrical. Also, the Gen-Xers looked more like Baby Boomers.
--I don’t know if I like the movie poster. It looks like: 1/3 Abbey Road, 1/3 the famous evolutionary progression chart, and 1/3 the Jesus Freaks’ “One Way” symbol. But maybe it’s supposed to!
--Great Lenten film. Great film about community. Four seekers who still need community. Who still need to be “alone together.”
--We meet A LOT of people along the way, but it doesn’t feel like too much. Just like all the people we meet in our own lives.
--There’s lots of WINE on the Camino. :]
--Shot with Red??? The background was often in focus with the foreground!
--Why are we afraid to show MORE Western religion (Christianity) in films? While we can.
--Hmmmm: were the precious (various) guidebooks a BIG METAPHOR as well? Of course.
--“The Way” is screaming for a group-discussion booklet or guide book component of its own!