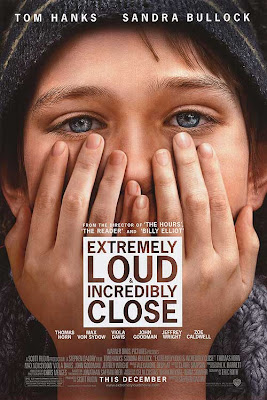 “Extremely Loud and Incredibly Close” is the story of a boy who loses his father in the Twin Towers on 9/11. Oskar Schell (wunderkind Thomas Horn) seems to have Asperger’s syndrome (Oskar comments that tests were “inconclusive”), and his dad (Tom Hanks) was the only one who really understood his brainy but socially awkward and phobia-ridden son. Oskar’s relationship with his mother (Sandra Bullock) is distant and strained.

Oskar, his mother and his paternal grandmother (with whom Oskar is also close because she communicates on his level) live right in Manhattan. “Extremely Loud” reconstructs what Oskar dubs “the worst day.” We are taken through the exquisite pain of what families must have endured during and after their terrible losses. To “make sense” of the pain (Oskar is all about science, facts and logic) and to be able to hold on to and feel close to his father, Oskar sets out on a mission to find the lock that goes with a mysterious key found in his father’s closet.

Oskar’s quest takes him all over New York City to meet many, many people, and in the process he must overcome his many, many fears (exacerbated by the trauma of 9/11). He has a fiercely determined and obsessive will, and his general inability to empathize/sympathize with others makes him sometimes verbally and otherwise abusive, especially toward his mother.

It’s pretty interesting and enlightening to see the world from this geeky kid’s perspective. There are more and more young people like Oskar, and we will be seeing more and more films incorporating these characters. However, the total improbability of a guileless young boy journeying around NYC alone (although the highly improbable reasons for his safety are later explained to us, and the fact that at one point an older gentleman [Max von Sydow] accompanies him on many of these treks) makes the heart of this tale feel exceedingly unreal.

Although there is a delicate, moving soundtrack, and the dialogue and acting is meticulously executed by the finest in the business, there is just so much artifice to the whole project that I never once lost myself in the story or forgot that “these are actors” and “this is a film”—a well-simulated tale, but ultimately contrived. It hits all the right notes, tropes and hackneyed themes, but the only originality here is getting into a boy like Oskar’s mindset when faced with a horrible tragedy (Oskar gives abundant voiceover to the slow-paced 129 minute film, but it fits). The clichés are attacked head on: “Everyone has a story to tell.” “Everyone has suffered something.”

There were many sniffles in my theater, but I just couldn’t. It didn’t feel as though 9/11 was being exploited, and I didn’t feel emotionally manipulated: it was more like the product I was watching was pitch-perfect, Purell-sanitized with very few surprises or light moments although it tried mightily to aim for both. We were taught in film school that you’re allowed one perfect coincidence in a film, usually in Act One, but ELIC has quite a few. I just didn’t buy it.

The value of ELIC? To hear the distinct voice of an Asperger’s kid who moves from headstrong to heartstrong. Life is a bunch of little moments. To re-live 9/11. To examine various archetypal father-son relationships (solid and weak). To look death squarely in the face and know that “love is stronger than death,” even for a little boy who doesn’t believe in miracles.

--Another film with PRECIOUS little media technology shown being used (even though film IS set back in ancient 2001). People talk to each other, write longhand letters, hug, draw, scrapbook, have deep conversations, play old-fashioned games, admire and use artifacts from the past (note old camera, old film projector). Today’s movies are becoming refuges for depicting hyper-tech-free living, no-tech zones.

--The title was never used in the film (that I caught, anyway) but totally appropriate since Oskar does not like loud noises (one of his quirks).

--Like the “Twilight” series, the folks in “ELIC” have lotsa, lotsa time on their hands. They don’t cook, eat, shop, go to the bathroom, do dishes, make coffee, take showers, do homework, clean, etc. Hey, even Lisbeth Salander goes to the grocery store for supplies.

--Thomas Horn (discovered when he won during Kids Week on Jeopardy) is just totally precocious, like so many of the incredible crop of child actors today.

--Oskar has an Oscar moment when he’s explaining in a deluge of a monologue to his grandmother’s mute elderly gentleman “renter” all that he has endured since 9/11…. Also, great scene of his rage at the end, when Mom tries to calm him down.

--Oskar is very hard on himself and demanding of others. He feels things so intensely, not just external stimuli, but emotions, too.

--Oskar comes to the conclusion that: “People are not like numbers. They’re like letters and letters make stories and stories want to be told.” Nice.