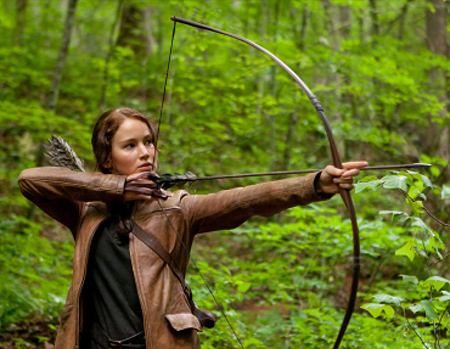 “The Hunger Games” books-to-movies juggernaut has captured the imaginations of young people and adults alike. It’s been said that writers of young adult literature are the true risk-takers and innovators today, creating believable, daring and intriguing new worlds and characters. (Full disclosure: I have not read the books, so this movie review will not be a comparison.)

“The Hunger Games” is set in a way-beyond-dystopian future in which the rulers living in the Third-Reich-like “Capitol” keep the peons in the “Districts” in fear and subjugation by holding gladiatorial games each year. The combatants are children and teenagers, picked at random to fight to the death, each representing their District. This shocking and unusual premise keeps its promise and delivers all kinds of unusual twists, which are at the same time familiar to us because—everything is televised. Like a gruesome reality show.

Katniss Everdeen (the flawless Jennifer Lawrence) volunteers to take the place of her little sister when her little sister’s name is drawn. A young man, Peeta (Josh Hutcherson), who has a crush on Katniss, is also chosen from her District. Out of twenty-four contestants, there is only one victor. We follow Katniss through her Hitler Youth-like “show no mercy” training and prepping in fighting and survival (which includes a stylist, played by Lenny Kravitz, because Katniss will need “sponsors”). The mechanics of fame are clearly delineated for the young combatants as they are packaged and presented to the public. All of this does not come naturally to the honest, unvarnished Katniss. When the games begin, alliances are made to stay alive. Some are genuine and others’ only self-serving.

“The Hunger Games” books are written by a woman, Suzanne Collins, and she gives us a strong female heroine in a cruel and violent world (although some of the other young people are also kind). Katniss never loses her humanity through it all, and never initiates the killing. Instead, she tries to flee it, and help her friends at her own peril. My one beef with the film is that Katniss has no character flaws. None. She is perfectly noble at all times. Even her weaknesses are her strengths (pluckiness, her inability to be anything but herself and play-act, etc.). It’s true that some people in real life are like this, but it makes them less relatable/imitable on screen, and it’s just one of those cardinal rules of storytelling/screenwriting: the main character has to have at least one flaw!

“The Hunger Games” is a story of veracity and self-sacrificial love in the face of power, control, image and spin. It is sharp social commentary on the very military-business-elite-media complex system that surrounds us more and more. The Games are schadenfreude, others’ misfortune as entertainment. Entertainment as control and distraction for the benefit of the few. There are potent ideas to chew on: “Not everyone likes the underdog.” “We don’t always have the luxury of being heroes and rebels if we are responsible for others.” “A little hope keeps the status quo—too much hope can foment rebellion/revolution/resistance.” “Hope is the only thing stronger than fear. Contain the hope.” “What if no one watched the Games?” (This last idea reminded me of the 60’s expression: “What if they held a war and no one came?”)

The young cast is fabulous, but so is the star-studded adult cast, and they work together like a well-oiled machine. Woody Harrelson plays Katniss’ and Peeta’s mentor. Elizabeth Banks is a Capitol operative that needs a visit from the fashion police. Wes Bentley is the TV producer of the games. Donald Sutherland is President Snow, and Stanley Tucci is simply at his best as the effervescent, toothy, blue-ponytailed host and commentator of the games.

President Snow is clearly in iron-fisted charge as a kind of Wizard of Oz-like social engineer. And the ending—showing him dissatisfied with the outcome of the Hunger Games—segues us to “Catching Fire,” the pending sequel (#2 in the trilogy).

One of the big questions surrounding “The Hunger Games” has been: Is it too violent for children? Especially since this is kids killing kids? I would say: know your kids, and at what age YOU think they can handle this. A fascinating article appeared in the Chicago Tribune citing a Hollywood script doctor turned pediatrician (yes, you read that right). The article talks about the difference between violence in print (the imagination protects the child) and violence on the screen (the imagining is done FOR the child). Another point brought up in the article is that when the aftermath of killing, maiming and violence is NOT seen, this can be more desensitizing than when it is. (There is not much aftermath in “The Hunger Games.” Most injuries and death are swift and the camera swoops away.) http://www.chicagotribune.com/entertainment/ct-ent-0321-violence-hunger-games-20120321,0,4551798.story

The question I would ask is: Why do we need/want to see this at all? I realized halfway through the film that I was actually watching a show within a show. What makes ME essentially different from all the people in the Districts and the Capitol who are watching this AS ENTERTAINMENT? Why do we find this entertaining and not repulsing? Is it simply: “I like to put myself in that situation and wonder what I would do?” “I like to see the good win out over evil?” (Good is firmly portrayed as good and evil as evil.) Am I desensitizing/preparing myself to accept a possibly more vicious future in reality by allowing myself to imagine one? Of course, World War II (or any real war) is far more hellish than this film. I couldn’t help thinking of the Jewish children of the Warsaw ghetto who were shot on sight--for sport--by Nazi soldiers.

The film is extremely well done on all counts. Once you know what you (and your children) are in for at the cinema, it’s your call.

--Jennifer Lawrence (who is 22 but looks like a teen) has an incredible ability to project innocence, resentment, simplicity, fear, anger. In an interview with “Rolling Stone” magazine, it was said of her (by those responsible for casting her)—they had never seen such reserves of emotion in an actress before. Lawrence already played a “girl surviving in the woods” in the small but acclaimed film “Winter’s Bone.” Evidently, in real life, she’s a tomboy from Kentucky with a wild streak.

--From the moment Katniss rises up on the pedestal in the middle of the wilderness to kill or be killed, we feel what war really is: an arena for mayhem and slaughter—with very few rules. She is now fair game. She is now meat.

--The movie is 142 minutes (and feels a bit long), and there were a few lulls in the rivetingness.

--The soundtrack is subtle and invisible (a good thing).

--Jennifer Lawrence has this incredible ability to put a look of "unknowingness" in her eyes.

--Katniss—although she never articulates it--would rather die with her humanity intact. She is trying mightily to win and preserve her life, but she won’t stoop to treachery or cruelty to do it. “Better to suffer for doing good than for doing evil” –1 Peter 3:17.

--The set design is sheer eye candy, from the Appalachian-like hills and woods, the miners’ drab homes, 1930’s plain Depression-era dresses; to the contrasting, garish Wonka-like world of the Capitol; to the Riefenstahl-esque propaganda-pageantry of the opening of the Games.

--I like how Katniss’ enemy was humanized at the end. We actually feel sorry for him. He was created by the Capitol.

--5 FACTS ABOUT "HUNGER GAMES" FOR THOSE WHO DIDN'T READ THE BOOKS: http://screenrant.com/hunger-games-movie-books-facts-kofi-160434/ (I just have to laugh at one of these facts: "The young actors can act, too...." I find it's just the other way around these days! I have to put a good word in for the adult actors because young adult/teen/child today usually act the adults--even the seasoned ones--under the table.)