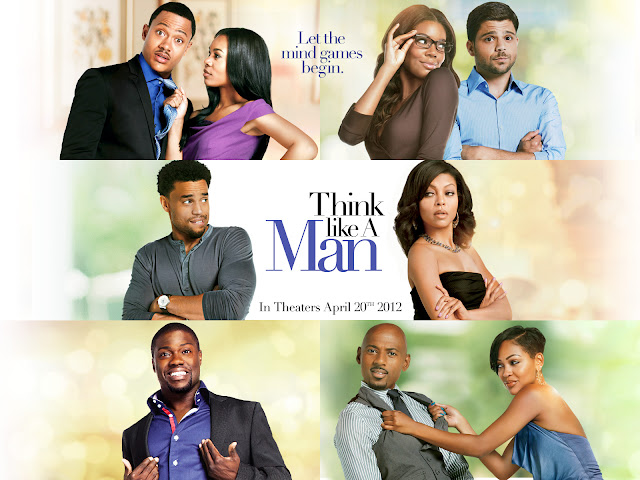 When I read comedian Steve Harvey’s serious book: “Act Like a Lady, Think Like a Man,” my first thought was: “Wow! He’s breaking the code of silence! Men must think he’s a traitor—telling the ladies all the guy secrets!” (The book came about as a sincere effort on Harvey’s part to genuinely help clueless women in bad relationships with men.) The premise of the movie: When a group of guy-friends realize that the women in their lives are using the book to “change the game” and get what they want from the relationship, the men decide to use the same book to make the women THINK they are getting what they want.  But, as the voiceover says: “The only problem with PRETENDING to step up? You may find that you actually HAVE to step up.”

Harvey’s main point to women is that men are inherently lazy, or rather, that they’ll take the easy way out whenever given it. (The “player” character admits he prefers women with “no standards.”) Women need to raise the bar. Women need to require men to do certain things and take certain steps in the relationship. The book itself is brilliant, exceedingly helpful, and is quoted all through the movie. The movie also includes snippets of Harvey himself on a fake talk show giving pointers. However, one unfortunate guideline in the book is “The 90-Day Rule,” that is, women should make men wait 90 days for sex, and then it’s OK. (Harvey has no problem with pre-marital sex.) Of course, this is a longer waiting period than many, many “couples” utilize, so at least it’s getting people thinking about the value of waiting at all.

Actually, the more I think about it, Harvey undoes and undermines all his good info and good advice (book & film) with his stance on pre-marital sex! Eeeeeek!


Sex IS marriage and marriage IS sex. Don't believe me? If you don't have sex, is your marriage consummated? I rest my case. If you still don't believe me, just listen to Cameron Diaz:

The film good-naturedly calls love a “battlefield” and accuses the ladies of starting the “war.” Guy “types” (player, Mama’s boy, dreamer, non-committer, happily-married man, miserably divorced man who thinks he’s happy) are pitted against gal “types” (powerful CEO that can’t find her equal, the one-night stand woman, the woman in the live-in relationship whose partner is too comfortable and is not proposing, the single Mom who can’t find a guy who likes kids). These are, of course, extremely realistic  and common situations.

The conclusion of the film is a kind of a win-win for both “sides.” It’s true that men are leaders in so many ways, but women must also exert their feminine power to help shape overgrown boys into real men, NOT to emasculate them, but to call them to true manhood! The guys may rise to the occasion kicking and screaming, but as Harvey says at the end of his book: down deep, men really want to be the real men that women want.

--Theology of the Body? Except for the premarital sex...HECK, YEAH!

--The screenwriters are men. It feels like there was a woman’s touch in there, but it might simply be that Steve Harvey really LISTENED so well to his female callers-in to his radio show (the inspiration for his book) that he is now an expert on “what women want.”

--The movie highlights my FAVORITE parts of the book!

--VERY slight overtone of kids being a “problem.”

--Excellent character and plot development. Especially for an ensemble piece.

--The basketball scene could've been funnier. That includes the outtakes at the end, too.

--This film is FILLED with lots and lots of banter. Guys really talking stuff out with each other (and gals, too, of course) in their guy way. The audience in my theater (young adults) were glued to the long dialogue parts. It felt like they were trying to catch some wisdom.

--The live-in female partner is treated like “one of the guys”!

--Lots of sex talk, but it’s somehow sweet and, ultimately PERSONAL, not IMPERSONAL, and ultimately HUMANIZING, not DEHUMANIZING.

--Men also expect a lot from women. “It’s 2012. She can open my door for me!” Even sadder commentary: “Women will put up with anything once they’re into you.” Actually, it’s even sadder than that. Women LOVE. And sometimes they love very badly and put up with all kinds of things when they should be loving themselves, too, and should either be changing the situation or getting out of it.

--There is a faint underlying Christian element in the film. One couple briefly pauses (before having passionate sex on a first date) because they’re “Christian.” At LEAST we see that religion matters and has something to say here.

--I have come to believe there’s nothing more beautiful than a Dad. (Actually saw two happy fathers—without Moms--bringing their 3 kids each into the cinema—but not for THIS movie! It was just such a beautiful sight.) Especially nowadays. Because they don’t have to be. Society today does not push men in that direction at all. And they can always impregnate and take off—as it has always been, but now that is totally socially acceptable. Dads aren’t necessarily respected by other men (but they get BIG props from women!)--and in popular media, fatherhood is portrayed mostly as EMASCULATING and a DRAG—when fecundity used to be (and actually IS) the epitome of masculinity!

--Men lie to women. Men won’t lie to other men, but they’ll lie to women. Or at least some will. Just one more double standard. Women, perhaps, manipulate, but are we as much outright liars as men are? I don’t think so. Unless we’re just imitating bad men once again.

--The male/female differences are captured sooooo well in this film. So true to life. And there’s plenty of defects on both sides.

--Most honest comment which is actually a good thing and the way God made us:
Zeke to Maya: “OK. I DO want the sex. And YOU.”