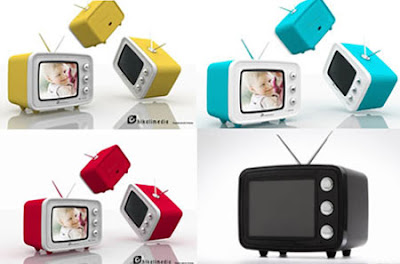 Anything good on TV this Fall? The very word “TV” can conjure up so many different concepts depending on how one uses TV. “TV” does not have to be watched on a television set anymore (although Americans overwhelmingly watched the 2012 Summer Olympics on their TVs) . It can be watched on our iPhone or laptop by going to a website or using an app. We can record up to five shows simultaneously on certain DVRs. Or we can just buy, download or rent an entire season of a particular show that aired five years ago or longer. Our TV choices are endless today. But content is still king, and it’s only the most captivating and watched shows that get to stay on the air.

Why are there so many mediocre new shows put forth each Fall? Shows you just know are going to fail? Because the money is still made through advertising as people rush to try out these new shows in their first few weeks, and through international sales. Scheduling? It’s beyond confusing with new shows having their first episodes rolling out as late as November, and then recess for weeks and start up again.

The scope and quality of shows differs greatly. Some shows (also depending on genre) look like the ephemeral media that they are(“Two Broke Girls”), others look like the finest in costly cinematic productions ("Cold Case," “White Collar,” “NCIS,” “Mad Men,” “Burn Notice”). Some shows are still basically sweet and innocent even in this day and age (“Psych”), and others are consistently assaulting and continually pushing the raunch-envelope (“Two and a Half Men,” “Family Guy”).

There are plenty of returning, favorite shows this Fall and plenty of new ones.  “Entertainment Weekly,” in their “Fall TV Preview” double-issue recommends these five (I am NOT condoning any of these choices—haven’t seen even previews):
1. Nashville—the music industry
2. Ben and Kate—an adult brother and sister show
3. Elementary—a take-off on Sherlock Holmes in the USA
4. Last Resort—two ballistic submarine officers together on an island (EW swears it works!)
5. The Mindy Project—Mindy Kalling from “The Office” is an OBGYN and party girl (this does NOT bode well)

More shocking violence? More explicit sex? More profanity and crass language? Yes, yes and yes. (There are watchdog groups that track the escalation of these things and the report/outlook is grim.) So why wouldn’t someone just stay away from it all? Because there are gems among the muck, and if we want to be a part of the New Evangelization, we need to know what people are drinking in and where their heads are at so we can engage the culture and offer right remedies and tailored prescriptions for what ails it. But always with prayer and prudence, of course. “Know thyself.” Are certain TV shows occasions of sin for you? (Absolute honesty is essential here.) We are not allowed to do evil that good may result.

An interesting sort of “study” of Fall sitcoms revolving around family life might be:
“Modern Family” vs. “The New Normal.” “Modern Family” portrays a three families: a white, older Dad with a Latina wife and boy, a white gay male couple with an adopted Vietnamese baby, a “traditional” family of Mom, Dad and three kids. “Modern Family” was praised for the fact that it showed up-to-the-minute realistic modern-day details like families bringing iPads and other media devices to the dinner table. “The New Normal,” features a politically-incorrect, crass, loud-mouthed (but “traditional values”) grandmother.  Her daughter and granddaughter are friends with a gay male couple who will be using the daughter as the surrogate for their child. Even the titles of these two shows is telling. The emphasis is on societal changes, the agenda is acceptability, normalization, mainstreaming.  Reality check? Yup, what they’re portraying is true to life, if even among a minority. EW calls "Parenthood" "tender" and "grossly underrated."

I polled my young adult friends on Twitter and Facebook about their favorite TV shows, especially sitcoms, that they consider “morally OK” (not necessarily perfect). Here’s what I got: 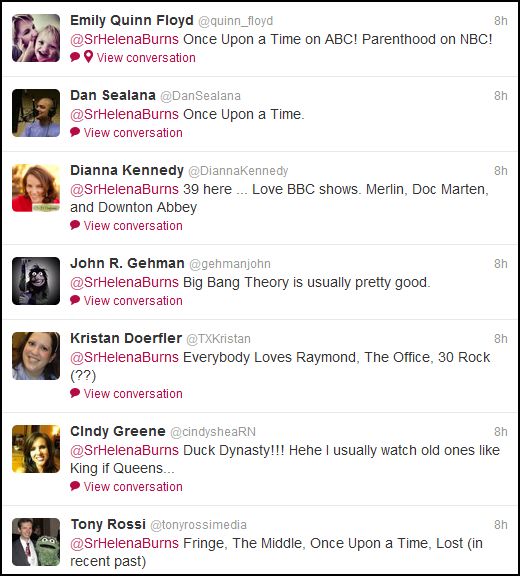 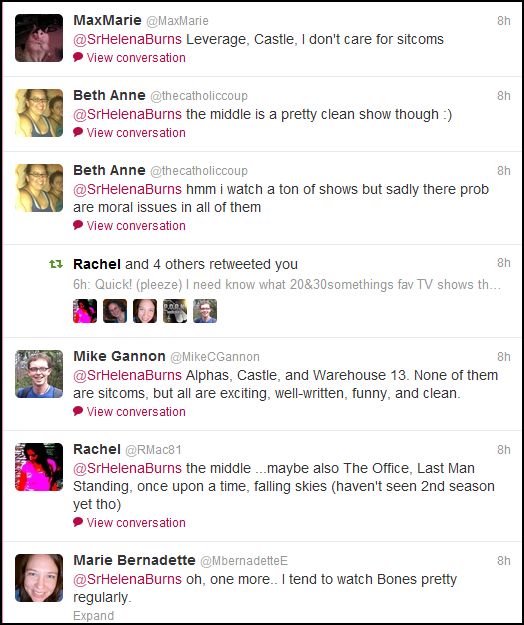 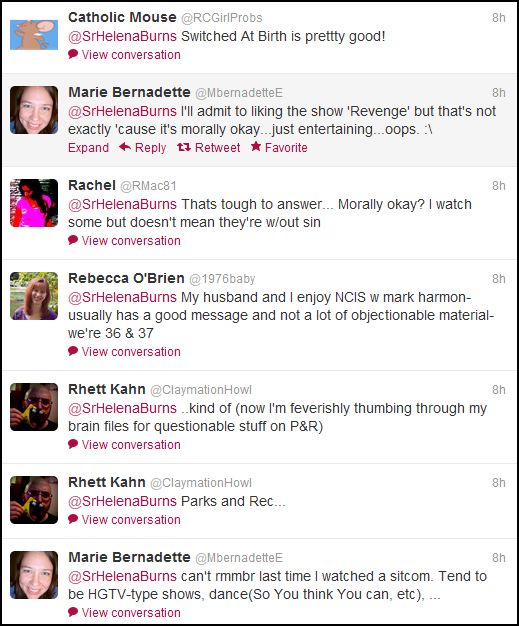 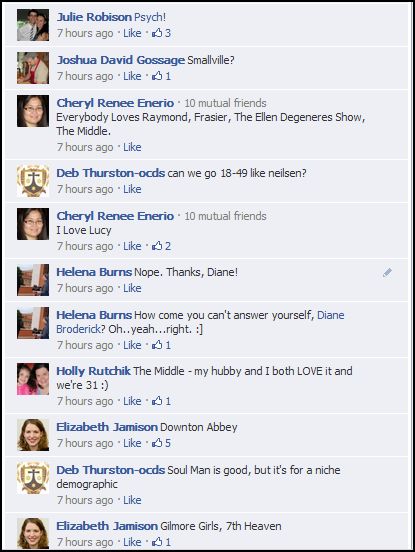 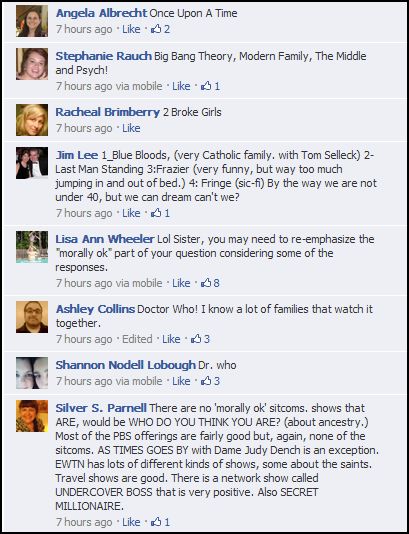 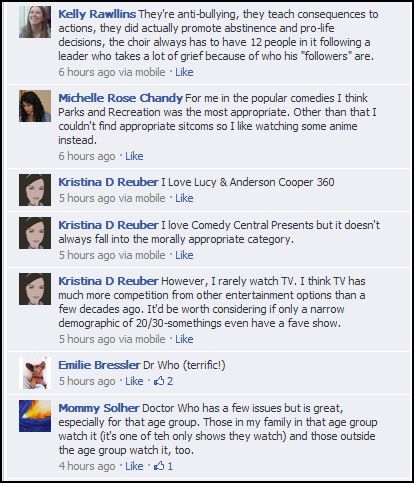 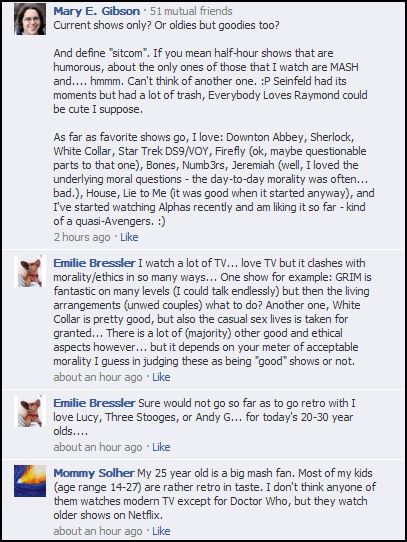 Another interesting “study” might be the whole genre of “singles” shows (TV is rife with them!), perhaps thinking about singles living “as” families. Since young people are waiting longer and longer to marry and/or “settle down,” twenty- and thirty-somethings find themselves in all kinds of living arrangements that act as proxy families—neither family-of-origin nor forming-one’s-own-family. More of an unknown-timetable, interim situation. (“How I Met Your Mother,” “The Big Bang Theory,” "New Girl"--there are just so many!)

Starting with, perhaps, “That Girl” (1966-1971), there have always been TV shows about singles, seemingly focusing on women more than men. The stigma of single women as “spinsters” or “old maids” was done away with starting in the early 60’s with the Sexual Revolution and “Cosmopolitan” Magazine editor Helen Gurley Brown’s 1962 book “Sex and the Single Girl."

“The Mary Tyler Moore Show,” and even “Golden Girls” celebrated being happy, fulfilled, female and single. Then came “Sex and the City,” which upped the risqué-factor with a concentration on thirty-something single women’s very active sex lives in NYC (which, unfortunately, is true to life). NYC is also the abortion capital of America. One zip code in Brooklyn has 16 abortions to every 10 births.
As early as 1961, Joan Didion wrote about New York City as a kind of holding pattern (she calls it a “leave of absence”) for young women, where doggedly pursuing their future goals was put on hold to “mess around,” rather prolongedly.

And now we have HBO’s tragic “Girls.” But it’s supposed to be a (poignant) barrel of laughs. “Girls” picks up where “Sex and the City” left off. And things have devolved for…guess who? Women. “Girls” is written and produced by Lea Dunham and stars herself and three other twenty-something girlfriends. The audience is treated to lots of nudity and (purposefully) awkward sex scenes which Lea herself describes (semi-autobiographically) this way: “My girlfriends and I are all in degrading sexual relationships with guys. But we’re all feminists.” The boyfriends expect the girls to act out maneuvers they’ve seen in their porn. Also, tragically, true-to-life. (This also goes for married women today.) The paradox and horror of it all is that these shows are being honest about how things really are, but there is a wholesale ACCEPTANCE, and a carefree “What can you do?” attitude on the part of women. Really? And you’re feminists? Ah, but with so-called absolute sexual freedom, women are ALWAYS the losers, but we have to keep that stiff upper lip and pretend it’s the only way to go, and we can live with it and we’re OK with it and we gotta keep on lovin’ the abuse! Right, ladies? Cuz we’re enlightened. Oh yes, and abortion is funny in “Girls.” One girl gets all giddily excited about “going to her first abortion” (she accompanies a friend). I can HEAR my heart physically breaking.

MY FAVORITE TV SHOWS? (I never just watch TV. I’m always working in front of it, usually at my computer, and only later in the evening.) I’m a huge surfer, watching little bits of everything. But when I put the remote down, I find myself staying on:

--“Dog the Bounty Hunter” (believe it or not, the most Christian show on television, showing forth the mercy of the Father). My all-time favorite TV show, hands down. No one beats the music they use for their soundtracks.

--Real-Life TV (non-sensational following of people in their real lives and unusual jobs, as opposed to Reality-TV which are hyped-up, unnatural set-ups like “Survivor,” “Fear Factor,” “Real Housewives,” etc.)—I like shows like “Pawn Stars,” and anything job-related

--news shows (serious ones) or serious talk shows like Tavis Smiley (best interviewer in the biz) and Charlie Rose. “Nightline,” for example, is not a serious news show.

--“Project Runway” (I usually stay far away from competitive shows because they are often so mean and heartbreaking--“PR” can be, too—but Tim Gunn was once voted “nicest man on TV.” and I love the principles of art and design that come out on the show.)

--Lifetime Movie Network (LMN)—a truly mixed bag, but always a woman’s story! Some are salacious and ridiculous, others extremely intriguing and well-done thrillers or true-life stories. As a screenwriter I’m always studying story structure, character development, dialogue, etc., and LMN is a great place to do that, even though it’s mostly “made for TV.” (They also have lots of fluffy fare produced in Canada and I have a pathological fascination listening to Canadians trying to hide their accents and trying to imitate Americans but they’re just  don’t have the same surreality and delusions of grandeur and pizzazz that we do because they’re so serious and sane and normal and I love trying to guess what part of Canada they’re in and look for red mailboxes and stuff.)

--and, of course, hockey (but only in season. Those reruns are just sad.)

I HARDLY EVER WATCH:

--late night (morning or daytime) talk shows--(pure silliness of a kind I can’t endure) “Wendy Williams” is just the worst. There is no excuse for that show.