MOVIES: "THE HOBBIT: AN UNEXPECTED ADVENTURE" (PART ONE)

The film adaptation of the beloved J.R.R. Tolkien classic, “The Hobbit,” has finally made it to the silver screen as a part one: “The Hobbit: An Unexpected Journey.” Running at two hours and forty-five minutes, it shouldn’t disappoint fans of the Middle-earth fantasy. “The Hobbit” is, of course, the prequel to the “Lord of the Rings” trilogy of films: “The Fellowship of the Ring,” “The Two Towers,” and “The Return of the King.”

Gandalf the Grey (a wizard, played by the made-for-the-role Ian McKellen) invites the homebody hobbit, Bilbo Baggins (an impeccable, humble and nuanced performance by Martin Freeman), on an “adventure.” Baggins declines, but suddenly finds his hobbit hole filled with dwarves intent on a quest to win back their homeland which was taken over by the evil dragon Smaug (which the British actors pronounce very painfully: S-M-O-WWW-G). A hobbit is needed for the journey because the dragon (and assorted nefarious creatures they will meet along the way such as orcs and goblins and trolls, oh my!) isn’t used to the smell of hobbit, and being tiny, Bilbo will be able to slip around unnoticed. The “dwarf prince” doesn’t want Bilbo along, thinking he will be a burden because he is not a warrior. But Gandalf believes in Bilbo.

There are many, many action scenes and battles and one perilous predicament after another. However, the scenes are so carefully planned out, easy-to-follow, and truly interesting that our attention is held. This is not just generic swashbuckling and sword clashing. (There are many different kinds of swords in “The Hobbit.” Swords are a Big Deal.) The intense action scenes lead us from one stage of the journey to the next. We never know what our little band will encounter as they advance through diverse terrain.

At times, it almost seems that Tolkien has the mind of a child or an animator (where everything is alive, everything comes to life, even the mountains)! There is an amazing interplay of species, and animals/nature are either corralled for the service of evil or good.

There are two extremely long scenes that seemed to be smaller plot points than others: One where Bilbo tries to save the dwarves from being eaten by trolls, and the scene with Gollum and the ring in the cave. But the acting, dialogue and overall execution is so captivating, it didn’t really matter. The movie is long but never tedious.

Tolkien was a devout Catholic (and even helped translate the Jerusalem Bible), and his fantasies were really “the moral imagination” at play. Multitudes of readers have found deep purpose, hope and meaning for their lives in his yarns. 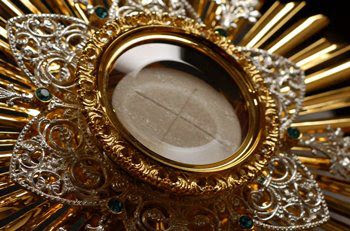 “Out of the darkness of my life, so much frustrated, I put before you the one great thing to love on earth: the Blessed Sacrament.… There you will find romance, glory, honour, fidelity, and the true way of all your loves on earth….” –J.R.R. Tolkien

(Apparently it's from a published collection of Tolkien's letters: http://www.amazon.com/Letters-J-R-R-Tolkien-J-R/dp/0618056998.)

--Man, those orcs are ugly. But the goblins are uglier.

--OK, so I just have to describe the ugliness of the goblin king. He had a beard, but it wasn’t hair, it was flesh! Like a huge goiter hanging down. Groddy to the max!

--When Gandalf was uncertain, afraid, whom did he turn to? Galadriel! “A strong man of God appreciates the strength of a woman of God.” –Pastor Rick Warren

--I feel so relieved. I was beginning to think I was a moral flibbertigibbet* because after reading The Hobbit 5 times as a teen and the Trilogy about 3 times, I just DID NOT GET THE LOTR FILMS. Like the Star Wars movies, I couldn’t get past the first film. I think my problem—for LOTR—had something to do with Elijah Wood. I felt like I was drowning in his doe eyes for the whole film. I’m sorry. It’s just the way I feel. BUT I redeemed myself to myself by loving, embracing, enjoying and UNDERSTANDING “The Hobbit”! Yay! Maybe I could venture to watch LOTR?

--The whole process of Gandalf-inviting –Bilbo-on-an-adventure is really a wonderful depiction of the unfolding of any vocation/calling. I’m SURE it will be used in the future for that!

--Dragons really like gold. They even sleep in it.

--MOUNTAIN trolls are “slow and stupid.”

--The mountain trolls look exactly the same as the troll in “Snow White and the Huntsman.”

--The necromancer dude reminded me of “the culture of death.”

--“The dark reign has spread.”

--The birds start returning to the dwarves' mountain after the dwarves set out on the quest and have a few victories….

--The Irish dwarf (actor James Nesbitt) was the Irish guy in “The Way.” I KNEW IT.

--The eagles at the end looked a lot like golden eagles, but they had white spots on their tails….

--I FIRST heard, yes, “heard” “The Hobbit” when I was about 9 years old and was being babysat by the teenage maids at HoJo’s Motor Lodge in Amherst, Massachusetts, where my father would attend summer classes at U Mass Amherst to be an Assessor, and we’d vacation at the Howard Johnson’s. (They had a great pool.) These teen maids were kind of bohemian and we’d sit on the floor of the laundry room, backs against the washing machines and they’d read to my brother and I. We LOVED the Sphinx-y riddle-contest between Gollum and Bilbo, and it was so thrilling to hear it in the movie again after all these years.

--Tolkien should have put more chicks in his stuff. Do not these dwarves have dwarf-wives--at least that they left behind on the homefront? No sightings. No mentions. (It's OK that there are no female orcs or goblins.) And yet, women really like LOTR, too. Maybe the women Tolkien DOES put in are so awesome and influential that we don't mind? Or maybe we didn't fully notice because we're so used to men's stories?

--I'm thinking of including "The Hobbit" in my canon of Important Theology of the Body films. Why? Because, like "Tree of Life" (THE primordial TOB film), "The Hobbit" links all of Creation/the Cosmos together. We ALL share in this drama. No one is unconnected.