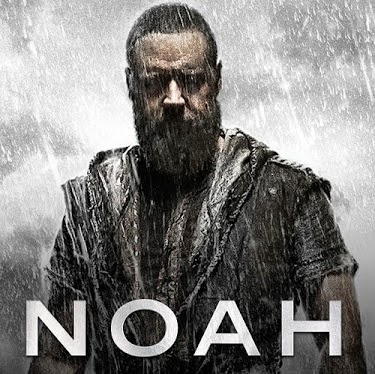 UPDATE! What I--and many others in favor of this film--did was a Judaeo-Christian read of "Noah." And it almost totally works. I can explain (by doing a Judaeo-Christian read) many elements that people say are Gnosticism or Kabbalah. However, some pieces didn't seem to fit. Especially the snakeskin (a concrete relic of the Garden--so that they will always remember they are sinful beings and from what they have fallen, just like the angels fell? Creation started off not fallen?)

In addition to my review, PLEASE also read this review by a theologian because I think what he's saying could be convincing on some levels.
http://drbrianmattson.com/journal/2014/3/31/sympathy-for-the-devil …

I still think there is much good to be gained from doing a Judaeo-Christian viewing/contemplating/discussing of this film, a biblical film like no other, served up in a way that people will take seriously for its cinematic quality. Fr. Robert Barron agrees: https://wordonfire.org/Written-Word/articles-commentaries/April-2014/Noah--A-Post-Modern-Midrash.aspx

Only Aronofsky knows what he actually intended throughout this movie (where he drew inspiration from at various moments). There are actually several different ways to read this (see "Comments" section below). On the "Colbert Report," he sounds like he's trying to be utterly faithful to the Jewish Bible (with added artistic license, of course). Perhaps even more explanation by Aronofsky will surface?

Sr. Helena recommends carefully reading the whole Noah story in the Bible before (or at least after seeing the film). It will clarify a lot!

Months ago, when I first heard that "Noah" was coming out, I, like the biblical Sarah, laughed to myself. "It'll be this big, ugly, off-the-mark extravaganza, just trying to make money off believers, and it'll flop." Like Sarah, I had to eat crow. Not literally! (Noah is a vegetarian in the film.)

"Noah," written and directed by atheist(?) Darren Aronofsky, is coming from a very good place. Aronofsky is Jewish, and his favorite Bible figure since he was little was Noah. He particularly set out to explore this momentous, but unplumbed Bible passage (Genesis 6:5-6) where God is sorry He made mankind (because of our wickedness) and decides to wipe mankind out. What is completely blowing my mind is that Aronofsky puts himself squarely in the place of a believer and enters so deeply into the psyche of Noah and those around him (as well as attempting to understand why a GOOD Creator would "feel" this way, and come to this conclusion).

Aronofsky lets God be God. God permeates the film. And He is not an ogre or a caricature. He is personal but ineffable. He is mercy and justice. "We are made in His image" is repeated over and over. I never really gave Noah much thought at all till now. Wow.  Everything refers back to the Garden of Eden. Aronofsky is careful that we don't just start in the middle--he wants to hold the whole story together.

"Noah" is the best Bible movie ever made. Yes, I just said that. It marries what was orthodox and more verbatim from the Scriptures in older films like "The Ten Commandments" with Charlton Heston--and combines it with today's sensibilities and filmmaking genius (in all ways). But when I say "today's sensibilities" I don't mean politically correct and anachronistic. In "Noah," men are men, women are women, fertility is everything. Family is everything. Fidelity to God is everything. The tension between fatherlove and motherlove is palpable, and we see why we desperately need both to be in balance! Oh, and women kind of save the day as well--in their womanly way. That's all I'm going to say.

A little study of WOMEN IN "NOAH" (and in other of Aronofsky's films, and perhaps life) would be very interesting!

The only thing that smacks of any kind of agenda might be the heavy stress on treating Creation well, especially animals (which I have absolutely no problem with and cheer heartily). The script even goes so far as to say (at one point) that the reason God is wiping out mankind is for the way we treated Creation. If this was ALL the script offered as explanation, I would have to give "Noah" big, big demerits. But in several other places, it tells/shows that we were corrupt in every way, in our dealings with each other (and treatment of women!), killings, wars, etc.

I applaud ANY film that tell us that, no, it's not OK to trash God's Creation. Dominion is not domination. Creation is sacred and it's God's and we are called to be good stewards and treat it with integrity.

Animal lovers (of which I am one) gonna looooove "Noah."

"Noah" is how you make a Bible movie. "Noah" is how you take the Word of God and seriously and humbly explore it in all its depth, complexity, nuance, raw human and divine drama without preconceived judgments on it, employing the best actors, composers, visual effects. This film breathes and sends you into deep contemplation/meditation. I didn't think it was possible to do that with the Bible in film.

What of the "artistic license" taken? Filmmakers had better take artistic license or they are not making films. Even if it's the Bible. Aronofsky uses "moral imagination" to the utmost. He is 95% faithful to the Bible in all that is essential, the heart of the story, and 5% is fanciful, but still informed by the text itself. For example, the most outrageous liberty taken is "The Watchers," giant stone creatures way-too-similar to Transformers who try to help blundering mankind. But these creatures are inspired by the enigmatic Genesis 6:5-6.

The editing is superb, superb, superb. The story never, ever lags. Nothing is drawn out, belabored and taxing as in most Bible and other epic films. Totally engrossing. I don't want to spoil here, so I won't, but Noah struggles with what God is asking of him, even in the clarity of it. Aronofsky imagines: what if Noah misunderstood a key piece of his mission--at first?

The nature of good and evil is dissected at length. Tubalcain represents how evil reasons, an alternative way to see oneself "in the image of God." Tubalcain believes that simply "taking" what one wants, harshly dominating the earth, and killing is what makes us like God. In contrast to Tubalcain, God's providence explicitly overarches Noah and his family's life. They trust in God, they wait on God. They imitate God's compassion and gentleness.


LOST IN THE SHUFFLE?

Probably my biggest criticism of this film is that God seems to get lost at the very end. It seemed to all shift to Noah (I didn't even see the rainbow that is there), and I don't remember any mention of the covenant. Noah seems to be the one in charge now: "I tell you go forth and multiply, etc." Perhaps, as throughout the rest of the movie, WE don't see or hear God, and so we are meant to understand that Noah is acting on God's word to him here. But it's REAL weak.

"Noah" shows how much is really up to us. We are to choose either darkness or light. We are to choose to love and obey God or not. There are real consequences, outcomes, repercussions and costs to our choices. Lectio divina,the centuries-old practice of prayerfully reading and contemplating a small portion of God's Word, alone or with others can also be transferred to the screen as "cinema divina." "Noah" is the ultimate example of "cinema divina" in my book.

--One of the many amazing features of "Noah" is that when Noah has to make his Abrahamic /Solomonic choice, it is NOT even solved "Deus ex machina" as it would have every right to in THIS movie if any! It is solved by a human choice. Then confirmed by God. Perfect.

--How desperately we need good men to lead.

--I could go on and on about this film. After reading a few reviews, I knew it would be good, but I didn't know HOW good. I literally could write for days....

--It always makes me sad when Jews are atheists. It just seems so wrong. As the Christian Liturgy prays during Holy Week: the Jews, God's Chosen People, were "the first to hear the Word of God." But Jews have also always wrangled/wrestled/negotiated with God and His Word. Perhaps "Noah" is a new way of doing this. The "Via Negativa."   http://americamagazine.org/issue/suspicious-minds

--Russell Crowe is back (after some lackluster performances of late).

--Noah wanted to shield his kids from seeing evil and violence. 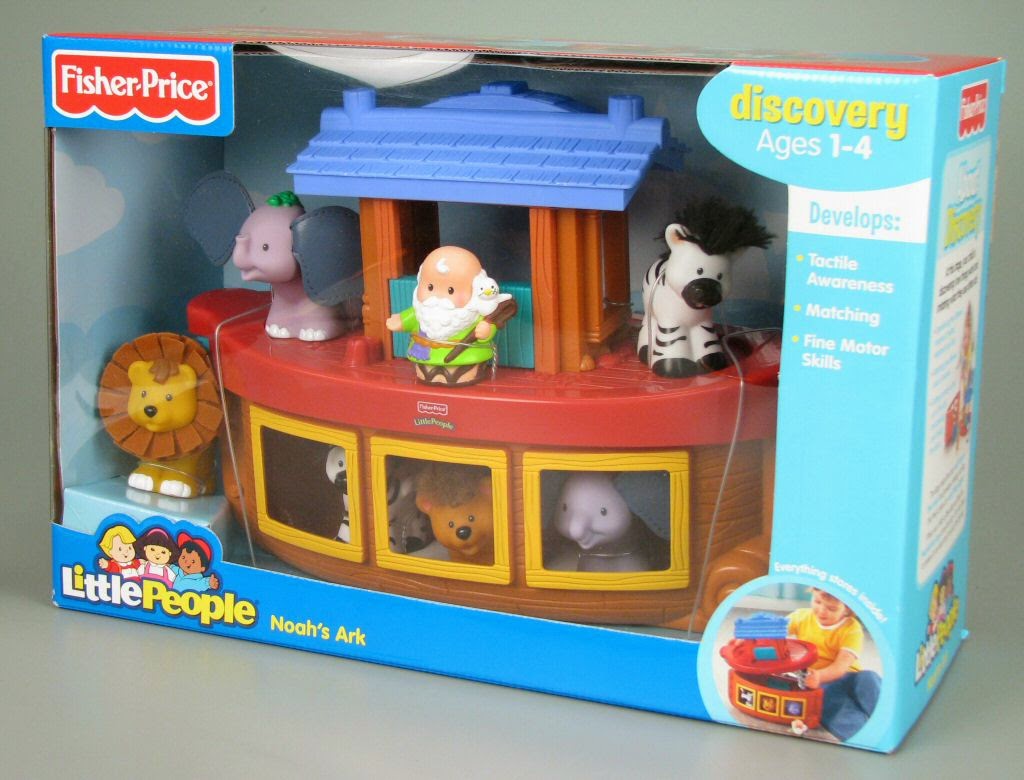 --A note on vegetarianism. We are allowed to eat animals (after the Flood) (Genesis 9:3), but they must have a good life, be treated humanely and with integrity, and be dispatched the same way. I have tried twice to go veggie for health and ethical reasons, but (even though I really don't enjoy meat), it's not good for my health. I have a B12 defiency and my body needs just a little bit of animal protein several times a week. I am always aware when I eat meat that an animal gave its life for me, and it's not the same thing as eating a donut.

--Can an Atheist Make a Good Bible Movie? http://thegospelcoalition.org/blogs/tgc/?p=44792 …

--Why Noah Is the Biblical Epic Christians Deserve http://variety.com/2014/film/news/noah-is-the-biblical-epic-that-christians-deserve-1201150333/

--The Ark featurette (see disclaimer at end about how filmmakers really want film to reflect Bible account, even WITH the "artistic license")  https://www.youtube.com/watch?v=InxsexEeIkc

--Excellent Review from Toronto Star that made me want to see "Noah" (I agree that it's about free will, but not predestination): http://www.thestar.com/entertainment/movies/2014/03/27/noah_floods_the_screen_and_mind_review.html

--Here's the great Noah debate on Relevant Radio: http://relevantradio.streamguys.us/ACL/ACL20140407.mp3 … me, Jason Jones, Elizabeth Scalia, Brian Godawa. What I didn't get to finish saying is that it's not that God left everything completely up to Noah, but that God wants human beings cooperating with Him to carry out His plans (He COULD just do it all Himself), and it's not easy for those humans! I'm sure the patriarchs, prophets and saints struggled mightily to "get it right"! Also, it's not just Kabbalah--most likely--that Aronofsky drew from, but also Jewish rabbinical writings and stories.

"The notion that the human will, when united with the divine will, can play a part in Christ's work of redeeming all mankind is overpowering. The wonder of God's grace transforming worthless human actions into efficient means for spreading the kingdom of God here on earth astounds the mind and humbles it to the utmost, yet brings a peace and joy unknown to whose who have never experienced it, unexplainable to those who will not believe."
~Fr. Walter Ciszek, "He Leadeth Me," pg. 117 (Ignatius Press) 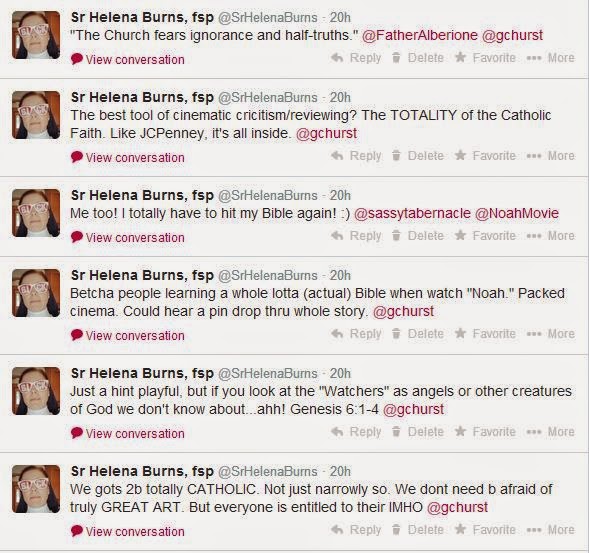 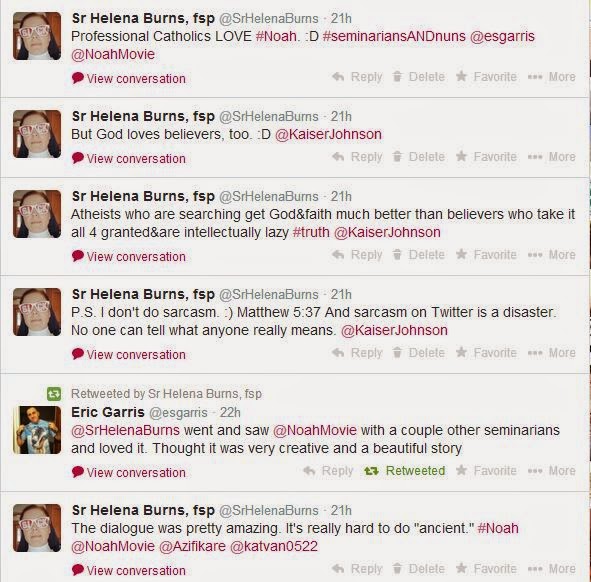 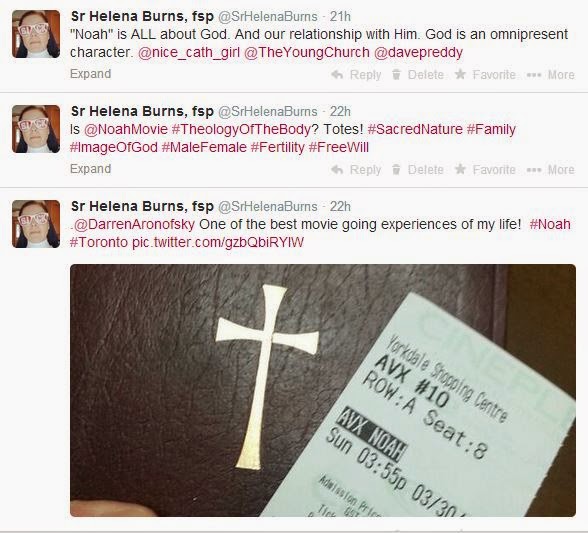 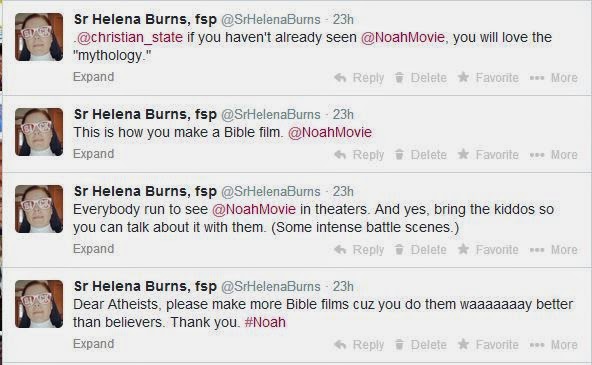