MOVIES: "ALONE, YET NOT ALONE"


The new Christian movie, "Alone, Yet Not Alone" is a very expensive-looking period piece (the $7 million shows!), based on true events that took place during the French-Indian War around 1755. As happened more than once in our history, settlers (women and children) were captured by Native Americans and made to assimilate into the tribe and adopt Native ways. (The grown men were killed.) This story is about the Leininger family, farming settlers from Germany, and their dramatic escape from the Delaware tribe.

The goings-on are situated within the larger formation of the United States, the State of Pennsylvania, with even Benjamin Franklin getting into the action. The main character is a little daughter of the family, Barbara, who was captured and spends many years with the tribe.

"Alone" features great music, makeup, wardrobe, lighting, cinematography, set design, and really gives the feeling that we are in these times. The acting? For the first three-quarters of the film: well done. Especially the kids. As I always say, kids today bury adults in the acting chops department.

But then, something very terrible happens to this film. It takes a nosedive in acting and impetus. Our main character grows up, and the actress that plays the older Barbara is simply not believable.The rest of the film also slows down considerably, and we're not left on the edge of our seats any more, but rather meandering aimlessly in the forest with our cast who seem to have no further goals than...existing. You know those kind of movies? Even when things heat up, it's a slow boil. There continue to be some great dramatic devices and plot points, but they are too placidly served up.

I am trying very hard not to be mean, because this film is quite an extravaganza. Quite the eye candy. Probably one of the "biggest" productions I've seen in a Christian film: Bravo! But truly, the last fourth of the film feels like a completely different screenwriter and director, and, of course, we have our grown up Barbara to contend with. To demonstrate what a turn for the worse this film takes: I burst out in muted (I was watching alone), prolonged laughter when "Native Barbie" first came on screen. (It's true the Natives darkened the light Germans' hair and skin, but this actress looks like she just stepped out of a spa.) She is extremely thin, delicate, mellow, with twenty-first century tics and sensibilities; I kept expecting her to whip out her phone to Snapchat.

I feel that the film portrayed Native Americans more or less as equals to the colonists/settlers, but with their own way of life, obviously. (Perhaps because of my own understanding and reading of events.) They do seem a bit fierce and warlike with harsh punishments for those (their own included) who don't do as they're told. (Let's remember that the Native Americans lived mainly outdoors and the discipline and cohesiveness of the tribe meant survival: life or death.) The policies and brutality of the occupying countries, soldiers and officials (living indoors, with the benefits of technology and imported goods) are completely missing.

There is a rushed recounting at the very beginning of the film during a Native council meeting: "They brought us the pox, took our hunting lands, etc." which could quickly be forgotten. There is also a quick mention of Natives being defrauded of their land, and that's why there is this hostility after seventy-three years of peaceful coexistence.

Why was this film made?

At first I questioned the purpose for making this film: A history lesson? Illustrating the living out of Christianity under duress? When I researched it online I discovered that Dr. James Leininger, a descendant of the Leininger family, owns Enthuse Entertainment that produced "Alone"!

I do still question if the script/film was passed through any Native American organizations for their side of the history. Scalping is presented as a purely Native American practice. Such was not the case. Some even believe it was the white man who introduced scalping to North America, and not all Native American tribes engaged in it. The French paid the Natives for British scalps. (How the heck do you know what nationality a scalp is?)

Is it worth seeing?

Yes, if you like history, and just to see how far Christian filmmaking is coming! If you take the kiddos, talk to them about and teach them correctly about Native Americans.

--When I was a kid at Camp Pesquasawasis in the woods of Portland, Maine (Camp Pesky for short), we used to have our own "French and Indian Wars": water balloon fights. Ruth Bassett (a Penobscot Native) was in my cabin. Years later, I find out that Ruth is our Sr. Marie James Hunt's cousin! Sr. Marie James' Mom is full-blood Penobscot, and Sr. James got to go to Kateri Tekakwitha's canonization in Rome and present a gift at the altar during the Mass. Sr. James' reflection on St. Kateri: "My people have carried so much sorrow. Ever since the canonization, I have seen just so much joy, so much joy and healing!" 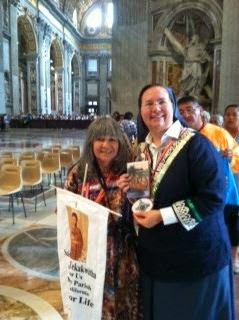 The Penobscot (Panawahpskek) are an indigenous people of the Northeastern Woodlands, located in Maine. The Penobscot Nation, formerly known as the Penobscot Tribe of Maine, is the federally recognized tribe of Penobscot people.[3] They are part of the Wabanaki Confederacy, along with the Abenaki, Passamaquoddy, Maliseet, and Mi'kmaq nations. Their main settlement is now Penobscot Indian Island Reservation. (Wikipedia)

--The title "Alone, Yet Not Alone" refers to a hymn that successfully threads through the story (sung by Joni Eareckson Tada!). Here's just a cool video of Joni preaching/singing:
https://www.youtube.com/watch?v=npVsacxknlU Very Theology of the Body.
The song was up for an Oscar, but the nomination got rescinded when it came to light that the producer emailed some Hollywood friends about the nom. It was considered "lobbying" which is done ALL the time, and in very blatant campaigns! Here's Joni's take on the incident: https://www.youtube.com/watch?v=B3-rH-_MoVo

--This film can present a feeling that there were three parties involved on some kind of level playing field: Native Americans, British, French. It is not stressed that this was the Native Americans' land! (Even though Native Americans don't believe land can't be owned, technically speaking.)

--Dig against Catholics? The German family narrates: "With the French, you had to be French and Catholic, the British welcomed all." Really???

--Twice: once when white kids steal food from colonists and once when colonists attack and Indian village (and don't seem to notice all the white people there--their skin and hair were not darkened at this point), there was a chance for the captives to escape, but nothing is made of it....

--I prefer the Canadian term for native, indigenous peoples: "First Nations." Make no mistake. Lest we forget.