MOVIES: "HEAVEN IS FOR REAL" 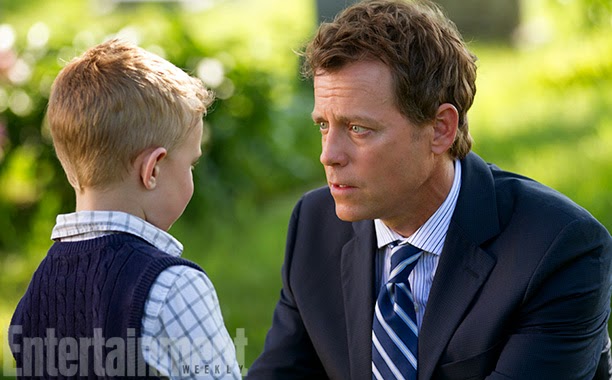 The movie "Heaven Is for Real," based on the book by the same name, is the true story of four-year-old Colton Burpo who claims to have seen heaven. First off: Do NOT watch the trailer if you haven't already! It's a great trailer, but it gives away a bit too much. Second off: DO see this movie!

Colton Burpo (played by the cherubic Connor Corum, who looks a lot the real Colton AND my nephew, Christopher, when he was that age--that's alot of "C"'s) is worth the ticket price. So is Greg Kinnear, who plays his pastor-father, Todd. Actually, all we needed in this movie was Colton and Greg together. Their chemistry is amazing and they are both just so believable. 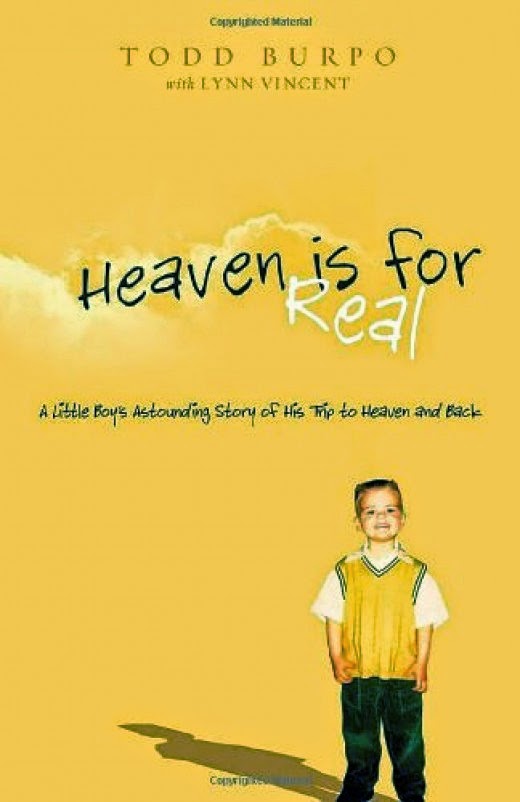 The story arc is rather simple, and we are treated to a RARE long Act One which is such a welcome change. The action does NOT follow the now-tired: Happy, happy family life and then--after seven minutes--BOOM, massive tragedy strikes. I had not read the book so I simply did not know what to expect, or what was coming, and found it on the unpredictable side. 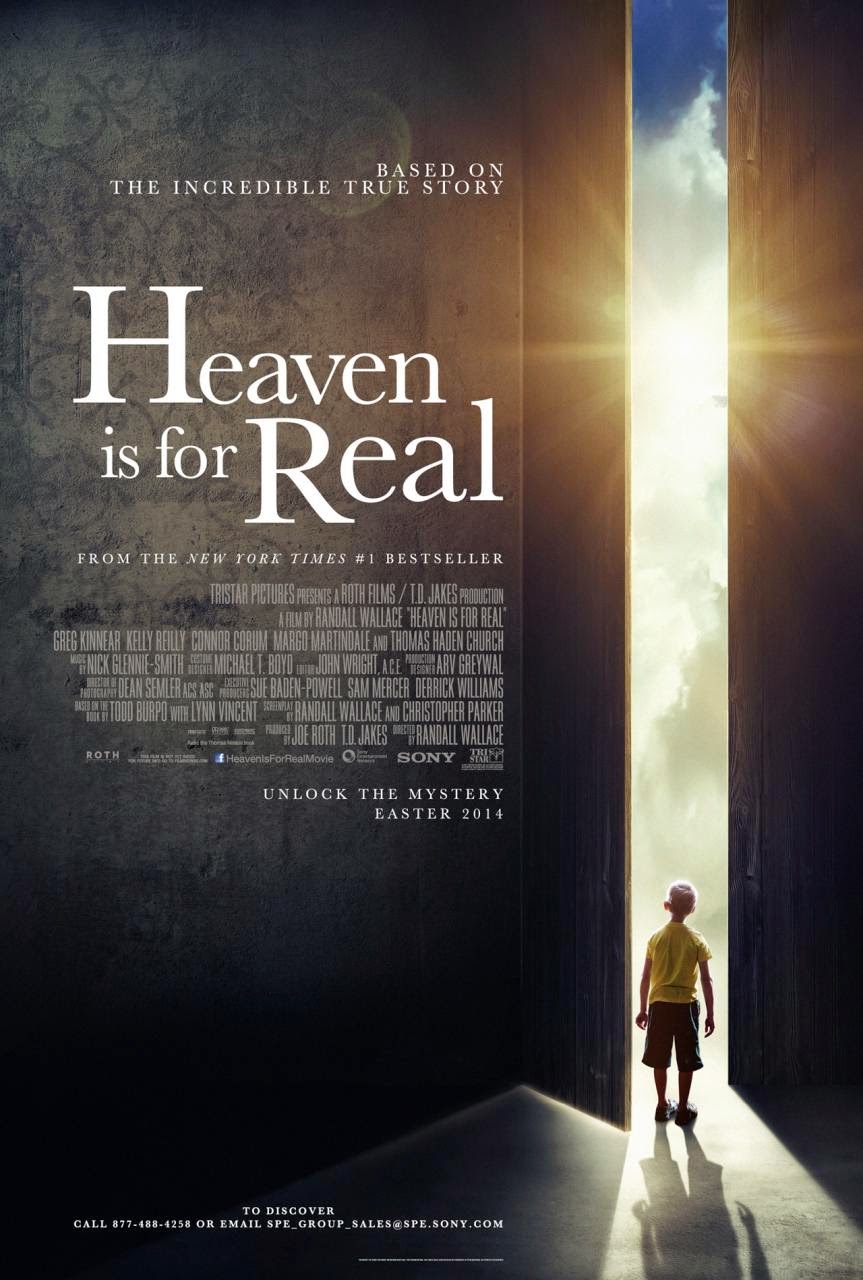 The stakes are not that high in this film. I found myself asking: so...what IS at stake here? Family finances, a pastor's mild crisis of faith? But we don't really care about the stakes, we are hooked because we just want to know for ourselves whether or not heaven is for real.

I think anyone could enjoy this film--even though it sometimes slips into pollyanna "Christian movie" territory, especially in the character of Todd's wife (British actress, Kelly Reilly, whose accent comes out a little when she's flustered), a consistently sweet, supportive, fawning, coquettish, fun-loving dream wife who always looks amazing. She also gets a bit maudlin at times. But I considered whether this was the actress or the thinly-written part, and I think it's a bit of both. Was she portraying a "pastor's wife"? She just seems such a throwback--in all her relationships and demeanor--to another era, almost. "On the other hand" (Tevya), it's refreshing to see a woman who chooses (much of life is a choice) to be...gentle, tender.

There are genuinely funny moments--marvelously expressed by Greg Kinnear's facial reactions. But there are dreadful moments as well, namely when the film...sigh...tries to SHOW us heaven. When the angelic music cued up and the screen got brighter and brighter I was muttering under my breath: "no...no...no!" But they didn't hear me. Clouds that we see out any standard airplane window, blurry white laughing CGI angels, and a duck-footed Jesus in a machine-sewn, bad Christmas pageant robe that comes only mid-calf, ankle-high Roman sandals*...shall I go on?

For anyone who has lost someone to death, especially a child, this is your film. And that's pretty much all of us, isn't it? This film is comforting and challenging at the same time. There are no easy answers. There is still mystery to it all. When a woman wonders if her adult son went to heaven, the pastor urges her to trust in God's love and mercy.

Todd's conversation with a psychologist he turns to for help must have been written by a Christian. Like the recent movie "God's Not Dead," it doesn't really grasp the mind of a nonbeliever--this conversation could have been prolonged and could have stood in for the much larger scientific discussion regarding near-death experiences.

We really, really, really don't want to be underwhelmed when it comes to heaven. The images of heaven in the film are like that in a children's Bible story illustration or a Jehovah's Witnesses book I saw once. But thankfully they are not like the oil painting bogs of "What Dreams May Come." As beautiful as heaven is, the point is that the most beautiful thing in heaven is God and people!

When Hollywood does "religion" well, they do it well. "Heaven Is For Real"--for the most part--is one of those occasions.

"Blessed are those who have not seen and have believed." John 20:29

--Jesus has a horse.

--Greg Kinnear is one of those actors you forget to mention when someone asks: "Who's your favorite actor?" But once you see he's in the film, or he appears on the screen, you know everything's going to be just fine.

--I totally and completely believed that Greg Kinnear was a Christian and a pastor and a Dad and a husband. Such good acting.

--Actors are people who are full of life.

--Thomas Haden Church is so much fun.

--Just when things start to get too twee, they get gritty.

--Passing kidney stones in a movie??? Is this a first? I didn't even think it was a real thing!

--Pastor Todd's congregation must not have known their Bible too well. They kept asking how Todd could have been to heaven if he hadn't died. (See  2 Corinthians 12:2.)

--"If God forgives anything, He forgives everything."

--Sometimes good is banal, too.

--It is not irrational to believe what is beyond reason's grasp/experience.

--There are "lots" of animals in heaven. Colton Burpo says so. Boom. (I knew it.)

--You would think the kid would miss heaven.

--There are astounding bookends to this film of a young girl, Akiane Kramarik (Google her art), who had a similar experience to Colton when she was four. Her painting of the face of Christ is approved by Colton as what he saw. Wanna know more about the devotion to and relics of the Holy Face of Christ through the centuries? I highly recommend the book (NOT the documentary): "The Face of God" by Paul Badde, Ignatius Press.

--New book by formerly unbelieving neurosurgeon who has since "changed his mind" (pun intended) after his own experience: "Proof of Heaven" and "To Heaven and Back" by a female doctor.