NEW (AND ONLY) DOCUMENTARY ON THE LIFE & WORK OF FLANNERY O'CONNOR JUST RELEASED! 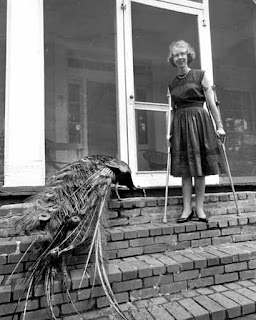 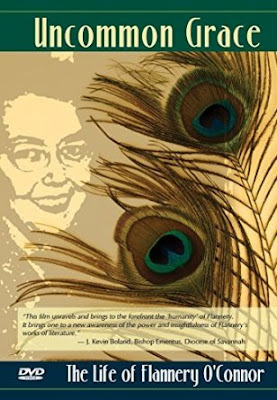 A new DVD: "Uncommon Grace--The Life of Flannery O'Connor"--the only documentary ever made on her--has just been released that does great justice to the life, work and faith of the ever-relevant Flannery. Although only sixty minutes in length, you will feel like you have sojourned for years with the acclaimed short story writer in Georgia, Iowa and New York City. Carefully researched, with interviews from Flannery experts and those who knew her, "Uncommon Grace" is an in-depth peering into the soul of a most unusual American author. Flannery was a devout Catholic who nevertheless knew, understood and wrote about the Protestant South that was her home.

Starting from childhood, Flannery (her real name was Mary Flannery O'Connor) loved books and creating books. While she was still quite young, she even felt that "literature" would be her future, her calling. Flannery was an only child whose father died an early death of lupus--an incurable auto-immune disease that would claim her life prematurely also (at age 39 in 1964). But in those short years, Flannery's rise to notoriety was meteoric.

I knew bits and pieces of Flannery's story from people in my life who are ardent admirers. I had read parts of a collection of her letters and a few of her startling "Southern gothic" short stories. "Uncommon Grace" tied all these threads together for me. Her importance to the world of modern literature cannot be underestimated. She has been a major influence on artists of other genres (e.g., songwriters). She has been imitated by many. The dark and shocking quality of her characters and endings seems incongruous at first with the bespectacled, conservatively-dressed O'Connor. But when one gets to know the unsentimental, quipping, sharp-tongued scribe, it all makes sense. Flannery was concerned about her contemporaries whom she saw falling into agnosticism and atheism. How could faith penetrate the modern age? What did her peers need to hear? Flannery famously said of her works: "When people are hard of hearing, you need to shout."

A basic premise in Flannery's narratives is that God is offering every person transformative grace in the moment, every moment, but even more at life's decisive, even if unforeseen, turns.

At the height of her career, due to her illness, the still-young Flannery was forced to live as a part-time recluse on the dairy farm run by her mother. (However, all writers have to be recluses of a sort in order to write.) She folded the everyday landscapes and scenes and people around her into her prolific tales (two novels and thirty-two short stories along with other writings) that were published and received with much buzz, reprintings and awards.

One of the most important questions explored by the film is the question: "Was Flannery a racist?" The answer is a bit complicated, especially in light of her short story: "Everything That Rises Must Converge."

"Uncommon Grace" is thorough and engaging on all counts (not too heavy, not too light) with an original, sparse, utterly fitting piano soundtrack. My one criticism is that the filmmaker herself did some of the narration. Although she has a pleasant voice and reads well, she has a Midwest accent and is not a professional narrator. It would have been well worth it to hire a professional. However, the film is otherwise up to snuff and completely worthy of immersing oneself in--by Flannery aficionados and neophytes alike. The filmmakers created this film as a true labor of love: to give some insight into Flannery's uncompromising worldview informed by her Catholicism.

Flannery suffused her stories with a jarring otherworldliness invading thisworldliness at life and death moments. In other less talented hands, these parables may not have worked, and might even have sounded preachy. But Miss O'Connor was deadly earnest about her craft and essentially gave the Gospel message new incarnations, new wings and new audiences.