LOTS OF SPOILERS BELOW BECAUSE THIS IS NOT ENTERTAINMENT.

This series got ME very, very depressed. The full-on suicide was horrific.
The filmmakers REJECTED THE ADVICE OF EXPERTS TO NOT REPRESENT THE SUICIDE WITHOUT CUTTING AWAY. (Rather than being irresponsible, I think they probably put artistic license before humanitarian prudence--thinking that brutal "art" could "save.")

Suicide is the #2 killer of teens today (North America). There are always copycat suicides after popular depictions (or news stories covering actual teen suicides) of teen suicides: this is exactly what happened after "Dead Poets Society." The copycat suicides are hushed up by first responders and news media, or they used to be, JUST for the fact of even more copycats.

"The first season of "13 Reasons" violated almost every scientific recommendation for presenting suicide in the media." --Psychiatrist Dr. Mark Sinyor (this is his field of study)  <---click article="" for="" p="">
I think the verdict is now out. The wildly-popular, or at least widely-seen Netflix series "13 Reasons Why"--(based on the book by the same name) about a teen girl who commits suicide--may actually have the reverse effect of its intended purpose. The purpose of the book/series was to prevent teen suicide by graphically depicting one, as well as the events leading up to it, all narrated by the deceased girl  herself.

I'm going to recommend the 5 articles below and one audio interview--which all urge great caution in the viewing of the series. Adults should certainly see the series so they can talk about it with teens who have seen it (or may have seen it secretly).  It is vital to just start talking with your teens about the series, about teen suicide and about the many, many other issues brought up in the series. Teens WANT and NEED to talk with trusted adults about this series.

--EXCELLENT! A mom-psychotherapist weighs in (INCLUDES THE CODE OF ETHICS FOR NEWS REPORTERS ON REPORTING ABOUT SUICIDES. "13 REASONS WHY" HAS DONE THE EXACT OPPOSITE): http://www.foxlevineandassociates.com/blog/2017/4/19/13-reasons-why-and-its-unintended-consequences

--Netflix Series Shows No Options To Help Address Suicidal Thoughts [beyond a website at the very end of the entire series and an epilogue by the filmmakers urging students not to kill themselves]:  https://www.pressreader.com/canada/toronto-star/20170428/282230895586114

--Parents Should Be Scared Because "13 Reasons" Shows How Little Parents Know About What's Going On In Their Teens Lives (On- and Off-line): https://qz.com/970701/what-should-really-scare-parents-about-netflixs-13-reasons-why-isnt-the-teenage-suicide/

What I would really love is to hear from teens themselves (those at risk for depression, suicide, etc., and those who are not but may have friends who are) as to how they are processing it all. (Hint, hint: comment on this blog post. Thank you!) Some are saying it is helping them to realize they need to be kind and little things can hurt a lot. Other young people are saying that they don't see any hope in the series--even though most people watched it all the way through waiting for something hopeful, some solution! Some teens are saying: but that's not real life! There IS hope!

Adults may want to begin watching the series with the very last episode which is actually an Epilogue with actors, director, producers and psychologists speaking about the making of the film (with clips of scenes). But it is not enough to watch this one episode. Teens have seen the whole series: you need to also.

The filmmakers had the best of intentions, but for all their filmmaking and teen-brain expertise, they failed to see that you cannot control/direct how the majority of teens may very well process this super intense, super dark, super hopeless drama.

And when you're a teen, who are you going to side with: adults telling you NOT to do something? Or a teen rebelling against everything around herself and keenly and articulately going on and on and on giving reasons for her suicide for hours and hours of the series so that she has the last word and is in final control of the situation?

Hannah Baker, the new girl at school, is lonely and suffering. A series of events, including sexting, rape, male objectification of females: physical/emotional/verbal, teenage drinking, teen sex, bullying, a fatal car accident she inadvertently and indirectly "caused," betrayal of friends, etc., led her to give up on life. Before she kills herself, she meticulously records 13 old-school cassette tapes to explain her "13 reasons why" she killed herself. Each of the 13 reasons are a person that she effectively blames. One young man in particular, Clay Jensen--as sweet and genuine as Hannah, with whom she began a romantic relationship--is taking it very, very hard, of course. Due to his shyness and awkwardness, he wasn't always "there for her," and so he is majorly blaming himself.

The series is realistic, gritty, and goes into the many heavy issues facing teens today. The dialogue is in-depth. It is very rich because of dealing in depth with so many teen topics. I'm sure teens will feel honoured by the very fact that someone cared enough to show the world what they are really facing (although, certainly, most teens aren't facing all of the issues portrayed). But that's not good enough. There is only one glimmer of hope at the very end when Clay reaches out to another isolated girl. But that's it. One psychologist is calling this "negative flooding" or "exposure therapy" which can actually work to make young people COMFORTABLE WITH SUICIDE. The negativity is soooo overwhelming.

Here's a seeming correlation of the influence of "13 Reasons" on  young people:

"The difference is we've seen a more rapid increase in numbers than we've ever seen," said Dr. Ajit Jetmalani, the head of Child and Adolescent Psychiatry at OHSU's Doernbecher Children's Hospital. "The pattern is similar, but it's the actual numbers that are alarming."

In his review, Christopher West makes the point that we shouldn't turn away from "13 Reasons" because WE'RE uncomfortable. Are we shunning/avoiding the ugliness that young people face every day? Are we refusing to know, understand, enter into their pain?

However, here's another psychiatrist who's been able to study the series at a bit of a distance now: 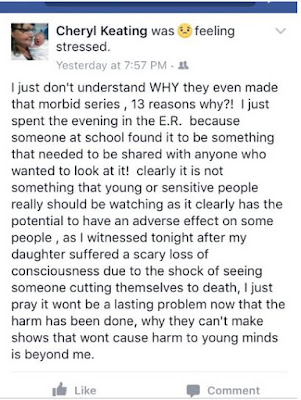 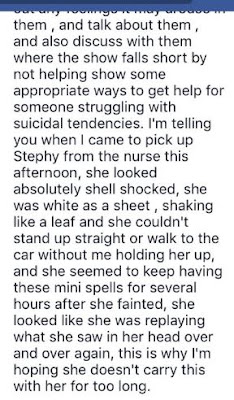 LOOKING FOR A PURPOSE

At one point before her complete downward spiral, Hannah says: "I need a purpose in life." Unfortunately, it's just a passing thought and this theme is not explored. Don't underestimate the ability of a teen to have a serious existential crisis. I did. And I seriously didn't want to live any more. I didn't know God yet and couldn't figure out why I was alive, what it was all for. Life seemed utterly absurd (even without the sufferings Hannah endured). And don't underestimate teens' ability to latch on to something challenging and true that might help in all the confusion. John Paul II wrote "On the Christian Meaning of Human Suffering" after he was shot. The point is not to just blithely accept suffering (we should try to relieve most types of human suffering, certainly), but it can make the world of difference to know that suffering can be redemptive: https://w2.vatican.va/content/john-paul-ii/en/apost_letters/1984/documents/hf_jp-ii_apl_11021984_salvifici-doloris.html

There is so much I want to say about this series. I took 10 pages of notes! Hopefully, I will begin slowly adding topics/subsections to this blog post. But for now, I concur with the 6 resources above.

Oh, and here are some hopefully hope-filled tweets I was inspired to post: 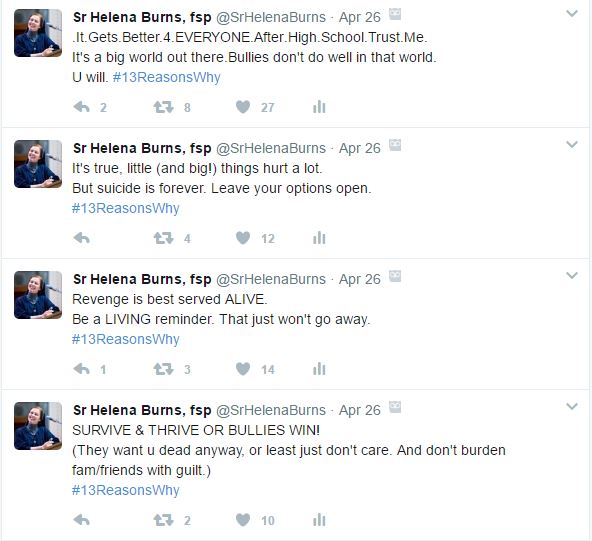