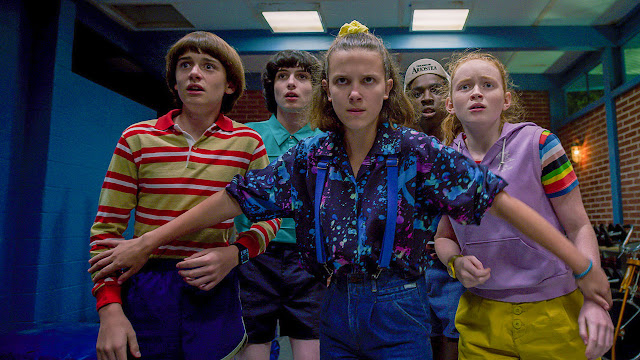 The justifiably eagerly-awaited third installment of the 1980’s sci-fi pre-teen protagonists action thriller is here. On Netflix. And it’s not the end! Stay tuned for Part 4.

Here are my reviews of parts 1 and 2: https://hellburns.blogspot.com/2017/11/netflix-stranger-things-seasons-1-2.html#.XUixMuhKiM8

Part 1 was family fun and family friendly, Part 2 went too far in language and aggressivity—almost to the point of my not being able to recommend it—but Part 3 is back, much more like Part 1, much more appropriate, but preserving the non-stop tension, stakes and intensity. Lots of intensity.

I want so much to unequivocally like this series, but I’m still a bit ambivalent. It has a lot of good stuff in it, but not even a whisper of human beings acknowledging God. There’s no religion. Nothing. (Perhaps a more accurate reflection of 2019, but not 1980’s Middle America.) There’s only evil, evil human beings and good human beings. We’re on our own to face the monsters.

I’m going to do this review in bullet form:

--Seems no one has anything else important to do besides sleuthing (and saving the planet). No jobs, school, etc.).

--Only the young girl can slay the dragon (Middle Ages, anyone)?

--Parts of ST are just so good and so human. Things slow down and we take time to be human. In real time. Real human time.

--Part 3 is much more manic, fun, funny, tongue-in-cheek, day-glo shiny and kid/pre-teen friendly.  Fun, fun study of the 80’s. ST is so self-consciously 80’s (not bad for filmmakers born in 1984) with the greatest soundtrack that actually fits and isn’t “greatest hits” or cheeseball. Sadly, still a lot of “JC” and one  “HOLY MOTHER OF GOD” (so I guess there is some God in it—I’m dead serious, this counts in a very negative way). But overall an attempt seems to have been made to make it more kid friendly again.

--At times, ST3 is only and all about pre-teen “dating.”  All about. With some terrifying sci-fi and maybe some real sci-non-fi thrown in.

--A little bit of feminism here and there—(mostly the girls building up their confidence), but fairly OK (not radical feminism). ST thoroughly enjoys hearkening back to a slightly simpler, slightly more wholesome time. I find that Millennials really love the 80’s for that (and SEE the 80’s as a time of innocence, something like the 1950’s, except for the LANGUAGE coming from the “mouths of babes.”)

--Hopper, the chief of police, tries to be Dad to El—does good, then turns into an idiot again (he’s never been a paragon of virtue).

--Frightening and grotesque disfigurements here and there when the creature(s?) strikes. Although the creature-enemy-monster is a run-of-the-mill, gummy mouthed blob, the terrifying thing about it is that when you chop it up, each severed piece takes on a life of its own. (Gives new meaning to “divide and conquer.”) Bits of torture. Lots and lots and lots and lots of intense prolonged violence by youth and often directed at youth. Lots and lots of continuous high-stakes action. The kids are heroic.

--Not a lot of parental supervision. Not all parents are bad examples or buffoons in ST. Some great parents and parenting moments.

--Our young stars are growing up gracefully. They are age-typical (if sometimes not exactly age appropriate), not smartypants or smart alecs to adults (only to each other).

--Interesting story line that makes sense with its own mythology / gooey mouthed creature which is a little scarier because it’s spider-like (and spiders usually are female in art…hmmm. Will this be an “Aliens” thing in the end)?

--S3: E6 The monster presence (never resting, always on a mission) starts as a kind of sense of evil, wanting to take over everything like Satan. Satan’s one job that keeps him very busy is getting you to hell. He has so much work with so many people to ensnare and get to damn themselves. Good portrayal of good vs. evil.  THE EVIL SEEMS TO BE GROWING LARGER AND LARGER. I don’t know that the depth of all the symbolism has been totally thought out, but it pretty much works.

--“Back to the Future” pop culture reference. Some smoking (making a comeback in films these days).

--The Monster to El: “You let us in, now you have to let us stay. We built it for you and now we are going to destroy you and then your friends and then everyone.” My spiritual director said: “Satan would like nothing better than we all kill ourselves.” Very apocalyptic. Very much for our times with rising suicide rates and the ongoing, multi-dimensional Church crisis. Vigano: “To fight and win with Mary the battle with the ancient dragon.”  “Your opponent, the devil, is like a prowling lion looking for someone to devour. Resist him, solid in your faith.” –St. Peter the Apostle

--Could ST be called a horror-comedy? (Yes, there’s quite enough chuckles to warrant it—the cherry slurpee scene alone, a good kind of campy).

--Cast of thousands--thousands of young people!

--Sweet, realistic romance, young love, how young people SHOULD  be talking to each other, how they SHOULD acting with each other (which was easier before media devices silenced everyone). HUGE JOHN HUGHES FEEL.

--For all her superpowers, Eleven/El needs Mike and can be fragile. She never acts "superior" to the others, but instead is trying to fit in.

--One gentle, sensitive “coming out” scene. Young adult guy hits on girl. Young adult girl sez she wishes Tammy was looking at her…. That’s it.

--“WHAT DO YOU WANT???” Billy to monster before monster takes him over (like a possession). Why Billy the lifeguard? Why anyone? Satan wants everyone. He has one job that keeps him very, very busy till the end of the world. ST3 really made me think so much of this! The gooey monster(s) divides and separates and lives on and just never goes away. Such hatred of humanity. Can’t help but think of the devil.  Spider-like (and spiders are always scary. And gross. And female?) Evil is powerful, getting bigger, makes weird, sticky, liquidy, chortling sounds. If you believe we’re kinda nearing the End Times or at least the Great Tribulation/Chastisement in real life? This film will feel prescient.

-- I’m in awe of these young North Carolina dude filmmakers who understand the glee with which we people of the Cold War used to say “commie b*st*rds!”—of course, angelic moi did NOT say that—the Duffer Brothers must have been listening to their parents/parents’ friends. ST3 also proves, once more, that the Russkies make the best bad guys, the best USA nemesis, and we miss the good old days.

--These kids are pretty heavily NERD KIDS. They would have to be to be involved in the investigative/espionage/combat  they’re involved in.

--As bombastic and seizure-inducing as ST is, there’s also something cozy and comforting about it.

--“SHUT DE DO’ KEEP OUT THE DEVIL!!!!” THE DOOR!!!! THE OPENING!!! THE PIT OF HELL that will one day open during the final battle (see the Book of Revelation)!  A NEWS REPORT ON A TV SEZ: “ARE ALL THESE TRAGEDIES LINKED TO AN INCREASE IN SATANISM?” (That could be a Freudian slip, or mocking the 1980’s upsurge in preoccupation with Satanism, and seeing Satanic symbols everywhere and behind everything.)

Such a great comment! I was trying to see what medal he was wearing and I kind of missed all this! So, of course, the "life guard" has to go first! ⚜ 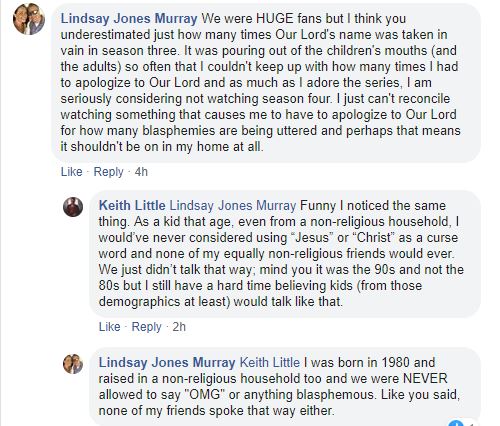 From my research on ST2, it seems the kid actors themselves really got into using the foul, blasphemous language themselves (even to the surprise of the filmmakers who wanted to cut it back a little) and demanded that they say it.