MOVIES: "THE BOY IN THE STRIPED PAJAMAS" 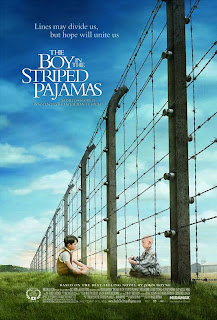 YYYYY
There can never be too many Holocaust movies. It's true there are many different "holocausts": the Armenians, Rwanda, the Ukrainians, the pre-born, etc., but the Jewish Holocaust is quintessential, at least for modern times. The Nazis employed and developed the latest technologies to make human extermination/extinction a science. The great modern project of paradise-on-earth-via-science-and-technological-progress was twisted almost beyond repair, and instead, created hell on earth. Postmodernism is born.

"The Boy in the Striped Pajamas" (from the 2006 children's novel) is a fresh, unblinking, exacting gaze at the horror that happened not so long ago. The movie poster says it all (please ignore the lame tagline on the poster)--there is "us" and "them," or rather "us" and "not-them." Two little eight-year-old boys on either side of a barbed wire fence, Bruno (German) and Schmuel (Jewish), try to make sense of something that doesn't make sense at all.

Bruno's (Asa Butterfield of the biggest, bluest peepers ever) Dad (David Thewlis) is a Nazi officer who moves the family a little too close to a concentration camp. Bruno, who loves adventure books and aspires to be an explorer, disobeys and has--very believable--clandestine meetings with Schmuel (Jack Scanlon). Once you get over the British accents and British-isms coming out of the mouths of Germans and European Jews (just embrace the exquisite British acting!), "Pajamas" is a "perfect film." I repeat, "Pajamas" is a perfect film. It's rated PG-13, but younger children should definitely see it also. (The Brothers Grimm pulled no punches either.) Life hurts, life is harsh. Evil is real. What side do YOU want to be on? This is probably THE best Holocaust movie for children because the story is simple, linear, and follows a child's process of reasoning.

If we are becoming a post-literate society, film can be a great way to peer into history, and examine our values. Although no Holocaust movie seems to capture the terror, the utterly debased living conditions, the outsized cruelty, this film gets to the living heart of the matter: What was going on in Nazi Germany and why, in all its nationalistic, ideological, "we're making the world a better place," murderous fervor. (See Ben Stein's movie "Expelled" for the Darwin-Hitler "natural selection" connection.)

"Pajamas" is also the story of a little boy who wants to be proud of his father, but can't. (What DID the Nazis tell their children when the propaganda didn't work?)

The score by the incomparable James Horner is imperceivable and scant. Silence and words are the eloquence here. Note the silence after Bruno asks Schmuel what he did wrong and Schmuel answers: "I'm a Jew." The same uber-civilized piece of classical music wafts through happy and gut-wrenching scenes alike.

The ending? Better the young people who go see this film realize what really happens when you start calling certain categories of persons "non-persons." Life is not a videogame.