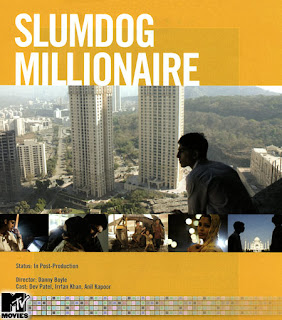 YY 1/2
"Slumdog" is an improbable--nay--fantastical story of Jamal, a little boy living in the slums of India, who grows up to work in an Indian "call center" (you know: those outsourced customer service destinations--ha ha! we have NOT seen that before in a movie), and winds up on India's "Who Wants To Be a Millionaire." And wins the jackpot. (The host is no Regis Philbin. He be nasty.)

It sounds like I'm giving away the ending, but that's actually the beginning. Through a series of flashbacks, we relive Jamal and his brother Salim's tragic young life--although they have many fun scrapes and chases with police, and clever entrepreneurial forays in order to survive. Along the way, they pick up their "third musketeer," a girl, Latika, who becomes Jamal's true love. "Slumdog" is really a love story in true Indian fashion: one love forever, and it's all the more delightful that they find each other while they are just kids (a set of three different actors play the children, teens and young adults--the best actors being the children, teens and adults, in that order).

The film promises a great escapade as we follow the children, but bogs down once Jamal reaches adulthood. We are forced to suspend our disbelief many, many times from this point on, which we wouldn't mind if the story was bloody good. Every ensuing plot point and event happens predictably and with impossibly perfect timing.

Although there are some rough torture and violence scenes in the beginning of the film (including rough treatment of children), the spirit of the film is one of "dogged" determination and triumph over obstacles, with a sense of destiny and a higher purpose running things. It actually changes in tone from an earnest look at the lives of the poor (earnest but hopeful, through children's eyes), to a slick coming-of-age gangster-type caper.

Hats off to director Danny Boyle who made a thoroughly Indian-feeling film (albeit very modern, with a Mumbai-meets-Harlem hip-hop vibe). Methinks Boyle likes trains (he directed "Trainspotting" and "Millions" which also have trains figuring prominently. And whether he knows it or not, Boyle's masterpiece is "Millions.") He uses trains as pounding, pulsing characters, driving the energy and action forward.

DO notice how India is looking more and more like the USA. DON'T expect too much from the film and you just might find it enjoyable.