CHRISTMAS: THE TENDERNESS AND THE VIOLENCE 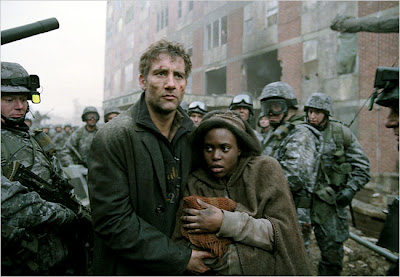 Isn't it amazing how incredibly tender Christmas is, and how incredibly violent? Think of the scene in "Children of Men" when the baby is brought through the ranks of soldiers engaged in some nameless, senseless street battle. They all stop for the passage of the baby—but just for a minute. We are not there yet.

Christmas 2009—violence escalates in the Holy Land. We are not there yet.

Think of what a hideously difficult life Mary had. Pregnant, she had to take a long trek to comply with a census. A King was out to kill her Son and the Holy Innocents were slaughtered in place of her Son. Mary had to flee to a foreign country. Mary had to keep a divine secret to herself for years. Mary was poor and worked hard. (Where would she have been without St. Joseph to share these burdens?) Presumably, her husband died. Mary watched her Son fall out of favor with everyone, and she chose to be present at His excrutiatingly violent and cruel death. We are not there yet.

And yet, we are capable of such tenderness. Every Christmas, at a gorgeous mid-sized gothic Church in Chicago, Our Lady of Mt. Carmel, a chubby, older Italian tenor, John Vorassi, sings one of the sweetest lullabies to Jesus you have ever heard, called "Nenia Pastorale" by Bonaventura Somma (1893-1960). It has been the highlight of my Christmas for the past four years. It's very Italian sounding, and a certain point, there are no words, just humming and "oh"-ing. This song was WRITTEN for John Vorassi. I weep every year.

"Sleep, holy Jesus, from the distance comes the sound of trembling harps.
Your angels descend from heaven to keep watch over you as you sleep.

Today the Cherubim are singing accompanied by heavenly violins.
The countryside has now become a King's land.
Heaven and earth sing for you, gentle Jesus."